New York, July 17, 2009–The Committee to Protect Journalists condemns the attack on reporter Aweys Sheikh Nur on Wednesday by security guards during a court session in Bosaso, in Puntland, a semi-autonomous region of Somalia.

Five security guards beat the reporter with their AK-47 rifle butts after he took photographs in , he told CPJ. Puntland officials in the court, including Judge Mohamed Ali Aware, did not intervene as the guards assaulted Nur, according to journalists who were in the courtroom. 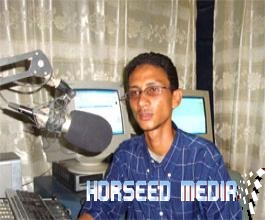 Nur, a reporter for the private Netherlands-based Horseed Media, at left, went to Bosaso GeneralHospital to treat back and neck pain, he said. He was among several journalists attending a packed trial for several men suspected of piracy, Horseed Media reported.

According to Abdiqani Hassan with the Media Association of Puntland, the judge ordered journalists not to take photos in the packed courtroom but Nur was not present for the announcement.

“Beating a journalist for taking photographs is utterly unjustified. The fact that no one in a court of law stopped the guards is even more reprehensible,” said CPJ’s Africa program coordinator, Tom Rhodes. “Puntland officials should punish the guards and ensure that journalists can do their work without fear of being attacked.”

Minister of Security General Abdullahi Said Samatar, based in the capital Garowe, said he was unaware of the incident but told CPJ he would investigate the matter.

In late June, Deputy Information Minister Abdishakur Mire Adan and the son of Puntland’s president, Mohamed Abdirahman Farole, told Horseed Media to remove a May 11 article posted on their Web site, according to the editor-in-chief of Horseed Media, Mahad Mussa. Mussa told CPJ the article was a follow-up to two stories written by the New York Times alleging links between the Puntland government and a pirate leader named Abshir Boyah. Horseed Media refused to take the article down. The media company has investigated links between the pirates and certain Puntland officials.