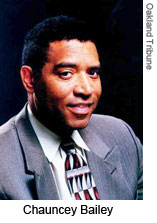 The move follows a lengthy report by a consortium of San Francisco Bay-area news organizations and journalists known as the Chauncey Bailey Project. In an October 25 report, the group outlined alleged police irregularities in the investigation; other questions were raised earlier this year by the CBS News program “60 Minutes.”

The alleged irregularities include a failure to pursue evidence that the murder was the product of a conspiracy. To date, one suspect has been charged in the crime. In a lengthy statement released on Saturday in response to the Chauncey Bailey Project report, Oakland police said the investigation has been handled appropriately. But the statement, authorized by Assistant Chief Howard Jordan, confirms several facts reported by the Chauncey Bailey Project.

The Alameda County District Attorney Tom Orloff told journalists last week that he would take the unusual step of assigning his own investigators to examine the case. On Thursday, Oakland Mayor Ron Dellums asked California Attorney General Jerry Brown to open another investigation into the murder. “It is imperative that an investigative agency outside the city also conduct an investigation,” he wrote in an October 30 letter to Brown. Dellums told journalists he was making the request in response to the report by the Chauncey Bailey Project.

“We welcome the additional investigations into the slaying of our colleague Chauncey Bailey,” said CPJ Deputy Director Robert Mahoney. “The report put together by Bay-area journalists raises a number of very important and troubling questions that must be resolved.”

Bailey was killed three blocks from his office by a masked person firing a shotgun. At the time, the journalist was investigating the financial dealings of Your Black Muslim Bakery, a local business that was associated with criminal activities, according to one of his sources, Saleem Bey, who later appeared on “60 Minutes.” Witnesses said they saw a driver waiting in a white getaway van at the time of the murder, according to the Chauncey Bailey Project.

Hours after the shooting, police analyzing shotgun shells found at the scene discovered the same weapon was suspected in a separate shooting linked to the bakery, according to the Chauncey Bailey Project. Oakland police confirmed in their statement Saturday that bakery associates were considered murder suspects within 24 hours of Bailey’s slaying. Early on the morning after the killing, Oakland police raided the bakery and made several arrests on unrelated charges involving the kidnapping and torture of two women. Detectives began to question those suspects about the Bailey murder.

The lead detective, Sgt. Derwin Longmire, has had a long association with the proprietor of the bakery, Yusuf Bey IV, who is indicted on a series of unrelated felony charges. Assistant Chief Jordan told Anderson Cooper of “60 Minutes” in February that he was aware of Sgt. Longmire’s longtime relationship with the suspect Yusuf Bey IV. Jordan said it was “unusual, but not unethical” for the sergeant to be assigned to the murder case.

Longmire did not respond to requests for an interview, according to the Chauncey Bailey Project. He did not immediately return a message left by CPJ seeking comment. The Oakland Police Department statement defended Longmire’s handling of the case, saying that he properly pursued evidence and leads.

After police raided the bakery, Longmire put two of those arrested–Bey and bakery employee Devaughndre Broussard–together in an interrogation room by themselves, according to “60 Minutes.” Oakland police did not record their subsequent conversation. Assistant Chief Jordan told “60 Minutes” that “in a perfect world” the conversation “should have” been recorded.

Broussard told “60 Minutes” that Bey pressured him to take responsibility for the murder during their conversation in the interrogation room. After the conversation, Broussard confessed to Bailey’s murder, saying he had acted as a lone gunman. Broussard’s statement to police was widely reported, but he later recanted after speaking with a lawyer. Broussard told “60 Minutes” that he was innocent, but that he knew who killed Bailey and that he would reveal this information at his own trial.

The Chauncey Bailey Project report raises questions about a tracking device as well. Police investigating alleged crimes unrelated to the Bailey murder had placed the device on Bey’s car prior to the murder. Data from the device shows Bey’s car being parked outside Bailey’s apartment building seven hours before his murder, according to the Chauncey Bailey Project. Police sources told the group that Bey, Broussard, and a third man–bakery employee Antoine Mackey–were in the vehicle at the time. Mackey was among those arrested during the raid of the bakery.

The video shows Bey telling associates in the interrogation room that he put the gun used to kill Bailey in his closet after the shooting. On the video, Bey mocked the fatal blast to the journalist’s head and boasted that Sgt. Longmire was protecting him from being charged. Bey also is heard saying that he and Longmire decided to blame Broussard alone for the murder.

The other suspects in the room are Bey’s brother, Joshua, and Tamon Halfin, both of whom are associated with the bakery, according to the project. Police in the San Leandro Police Department recorded their conversation as part of their investigation in the kidnapping and torture case, according to the Chauncey Bailey Project. Once detectives saw that the recording included dialogue related to the Bailey murder, they turned over the tape over to homicide detectives.

While disputing several specific charges by the Chauncey Bailey Project, the Oakland police statement does not address why no other suspect besides the alleged gunman has been charged. Neither does the statement address the San Leandro police video. Asked by CPJ if Oakland police had any comment about the video, Public Information Officer Jeff Thomason said: “We’re letting the statement speak for itself. We’re not going to comment further.”

Bey was asked by police on June 11, 2008, about the video, according to the Chauncey Bailey Project. He said he was trying to mislead police by making up stories, and he denied having any role in the Bailey murder.