Before I bury them below today’s lengthy post, here are two quick items. If you are stuck behind someone’s filtering system, in China or anywhere else in the world, check out citizenlab’s guidebook in pdf. It tells you how to circumvent the restrictions. And today the Foreign Correspondents’ Club of China updated its list of detentions and harassment to include incidents that have happened since the Games began.

Yesterday I described how www.cpj.org is inaccessible in some places in China and not in others. There are gaps in China’s Internet monitoring and censoring technology, and the Great Firewall sometimes seems more like a leaky dyke rather than an impenetrable barrier. In fact, it’s not just the blocking and filtering technology that keeps the Internet in check in China. Social controls play a very large role.

Here is a speech I gave in New Haven, Conn., in May at a conference on Computers, Freedom, and Privacy 2008. I’ve updated some of the data and text and added some of the slides from the PowerPoint presentation:

China is not the only country to try to manage public opinion by controlling the Internet — CPJ has documented Internet censorship in 22 countries worldwide. But China was most likely the first to implement a comprehensive program to censor online speech and to monitor e-mail and text messaging. China calls its methods the Golden Shield Project, and it was launched by the Ministry of Public Security in 1998. It is so expansive and sophisticated that countries such as Vietnam, Zimbabwe, and Thailand have adopted its practices.

China uses a mix of technological and regulatory tactics to try to control the Internet and other digital platforms like e-mail and texting. OpenNet Initiative says China uses “substantial” and “pervasive” filtering of political, social, and security-related content. Blocking user access to forbidden Web sites is a favorite tactic, as is reconfiguring search engines to filter out taboo locations.

That pervasive technical filtering is coupled with old-fashioned regulations. In the five years after 1995 when China first allowed private Internet accounts, the government issued more than 60 sets of regulations to control online content, and the regulations continue to come.

Most estimates suggest that the Chinese government has tens of thousands of people monitoring Internet activity, and the government is not shy about its efforts to control information: This February, Xinhua proudly reported that the wonderfully euphemistic National Office for Cleaning Up Pornography and Fighting Illegal Publications had removed more than 200 million “harmful” online items during 2007.

When needed, virtual Internet police–cartoon characters named Jing Jing and Cha Cha (jingcha is Chinese for “police”)–pop up on screens. They appear if the discussion veers toward politically sensitive topics, or gets rantingly abusive, or even too bawdy. 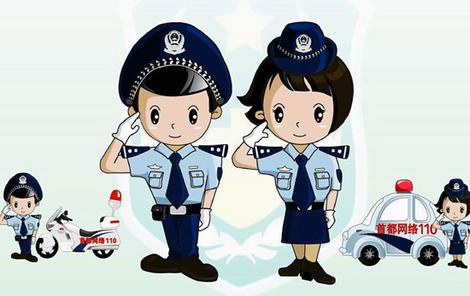 Below, the pair show up on a bulletin board discussion about whether Chinese corporations have donated enough money for relief for victims of the May 12 earthquake in . Jing Jing and Cha Cha are admonishing along the lines of: “Say no to rude and foul language, encourage peaceful and positive attitude.” 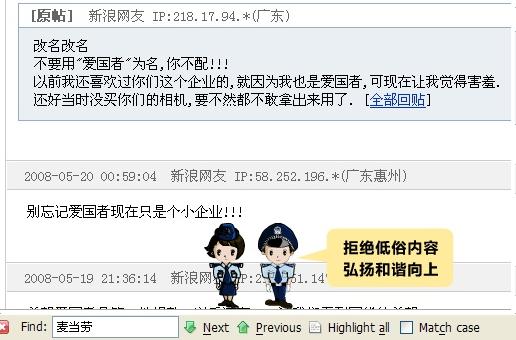 But even all the filters, bureaucrats, and Jing Jings and Cha Chas have not been able to stop online violations, so President Hu Jintao periodically makes public calls to “purify” the Web, saying that the Internet threatened, among other things, the “stability of the state.”

What threatens the stability of the state online? Denouncing the president, covering prodemocracy activities, mentioning Falun Gong, exposing corruption, reporting on the military, and even publishing photos of sleeping representatives at the National People’s Congress are off-limits online. If such material is posted domestically, authorities will delete it. If the postings find their way to international Web sites, far more severe action is taken. Of the 26 journalists CPJ counts behind bars in China, 18 are there because of Internet-related activities. Many of those jailed wrote for U.S.-based Web sites such as Boxun News or the Falun Gong-related Epoch Times site. But even under threat, bloggers constantly pop up, change addresses, hide behind proxy servers, and use a full range of hit-and-run tactics to sidestep the government. The government, for all its efforts, is fighting a rearguard action.

The Internet in China is thriving; high-speed, widespread interconnectivity is an integral part of the government’s policy of modernization. About 265 million people are online in China. That’s only about 17 percent of the mainland population, somewhat below the global penetration of slightly more than 19 percent. But subscription rates are growing at double-digit rates, unlike the trend in many Western countries, where Internet penetration has leveled off. And there is plenty to access: The total number of domain names in China is around 12 million, increasing annually at around 190 percent, according to the China Internet Network Information Center.

China’s acceptance and investment in the Internet has paid off commercially. Sina, for instance, is China’s largest privately owned infotainment Web portal, with more than 30 channels. About 55 percent of China’s online users visit Sina every day, and it has 220 million registered national and international users. Sina is big, but responsive: The site’s new channel was posted in black and white to commemorate the victim’s of the May 12 earthquake, and Sina launched an English-language channel to meet the global demand for news about the aftermath. With more than 800 million page views per day, advertising revenue runs at more than $50 million quarterly, with other revenue streams adding to strong profitability. Deutsche Bank predicts Sina will generate about $1.8 billion in profits this year–much greater than any Chinese print medium.

How do you control the content on such a moneymaker? Sina is responsible for monitoring its sites for content the government might find objectionable, but most users and all editors know the limits so relatively few abuses have to be addressed, according to a senior Sina editor. That system of self-censorship is the backbone of the government’s control of Web-based information. The government relies on service providers to filter searches, block critical Web sites, delete objectionable content, and monitor e-mail traffic. ISPs and Web site operators answer directly to government censors if a posting is deemed offensive. Too many warnings and the host is in trouble. All providers understand their responsibility and monitor their sites daily.

Hard news sites like bulletin-board systems, Web sites associated with search engines, and online text-messaging services are required to register as news organizations. Web sites that have not been established by an official news outlet such as a newspaper or broadcaster are forbidden from gathering or editing their own news or commentary. Legally, they can only reproduce material that has passed through censors at approved media organizations–and all media in China are ultimately government-controlled.

Bulletin boards are among the most dynamic online sites in China. They are readily accessible and can be posted to relatively anonymously with a minimum of technical savvy. They are a favorite for grassroots activism. More than 70,000 civil disruptions have been reported in a year in China, according to official estimates. That unrest stems from China’s rapid economic growth and the social disruption that comes with it. Village-level uprisings against illegal practices, abusive party officials, over-privileged business operators, and unfair land confiscation often make it onto local bulletin boards before they can be pulled down by censors. Postings are often cut and pasted and distributed by email, and the viral nature of the Internet quickly kicks in. Typically, information moves up to bloggers, who troll the sites, and eventually incidents come to the attention of mainstream media.

E-mail monitoring is another loose brick in China’s firewall, but users have learned to watch their backs. Rather than try to stay abreast of the flood of e-mail traffic, as it does with web sites, the government relies on individual service providers to monitor traffic, mostly through technology similar to that used in spam filters, OpenNet found. Its tests of China’s e-mail filtering system found sporadic blocking of messages with politically offensive subject lines or body text in both Chinese and English. In the case of an investigation or prosecution, providers are expected to make records of e-mail traffic available to the government–a system that is also used by courts in Western countries.

UPDATED: We added images of Jing Jing and Cha Cha and a graf of context to our original post.

Bob Dietz, coordinator of CPJ’s Asia Program, has reported across the continent for news outlets such as CNN and Asiaweek. He has led numerous CPJ missions, including ones to Afghanistan, Pakistan, the Philippines, and Sri Lanka. Follow him on Twitter @cpjasia and Facebook @ CPJ Asia Desk.