New York, August 12, 2008–Stan Storimans, a cameraman with Netherlands-based television channel RTL Nieuws, was killed today during bombing in the central Georgian city of Gori. His colleague, reporter Jeroen Akkermans, suffered shrapnel wounds to his leg and was hospitalized in a Tbilisi clinic, Jaspir Teijsse, a spokesman for RTL Nieuws, told CPJ Storimans was 39. 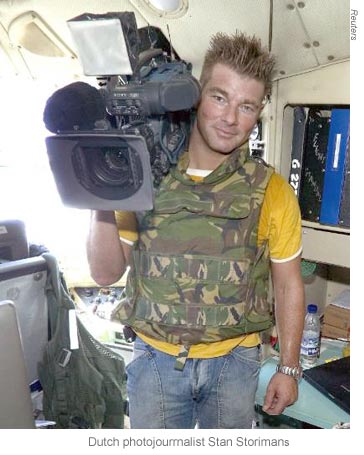 Three journalists have been killed and at least nine wounded since fighting erupted Thursday between Russian, Georgian, and local forces in the disputed region of South Ossetia, according to reporting by the Committee to Protect Journalists.

“We mourn the death of our colleague Stan Storimans and send our condolences to his family,” CPJ Europe and Central Asia Program Coordinator Nina Ognianova said. “We call on Russian, South Ossetian, and Georgian military authorities to honor international human rights commitments and to ensure the safety of journalists, who are civilians and protected by the Geneva Conventions.”

Storimans and Akkermans had traveled from Tbilisi to Gori early today to report on overnight strikes by Russian forces, Teijsse said. Initial reports varied as to the journalists’ location and the source of fire. International news reports described the fire as Russian air strikes, but Teijsse said he could not confirm that information.

Teijsse said the reporters were among a group of people who were outside when they were struck by the blast at about 8:30 a.m. He could not provide their exact location but said it was not considered to be a front-line spot. Dutch Ambassador Onno Van Elderenbosch was quoted by the Associated Press as saying that Storimans was working at a media center in Gori.

An ad hoc media center had been set up on the top floor of Gori’s three-story television and radio center to accommodate journalists traveling to the scene of the conflict, according to new reports and CPJ sources. Elene Gotsadze, a fixer who has worked for CNN, told CPJ today that most or all visiting journalists had vacated the center as of Monday.

CPJ sources in Tbilisi said they had received reports that the media building sustained heavy damage in an attack. CPJ could not immediately verify those reports with firsthand accounts in Gori. Sophie Brendel, a spokeswoman for Reuters, told CPJ that a bomb fell close to the media building, but she could not confirm the damage.

Teijsse told CPJ that RTL Nieuws is sending personnel to Tbilisi to retrieve Storimans’ body, and to help transfer Akkermans back home. He said it was not immediately clear whether the station will continue working in Georgia. “The main priority now is to get them back,” Teijsse told CPJ.

AP reported that Dutch Foreign Minister Maxime Verhagen, who knew Storimans, summoned the Russian ambassador to his office in The Hague on Tuesday for an explanation of what happened.

On Sunday, journalists Alexander Klimchuk and Grigol Chikhladze were killed in South Ossetia when they tried entering the conflict zone from Georgia. According to press reports, Klimchuk covered the conflict for the Russian news agency Itar-Tass and Chikhladze was on assignment for Russian Newsweek.