Mexico City, June 9, 2008—President Felipe Calderón today pledged his commitment to federalize crimes against freedom of expression in a meeting with the Committee to Protect Journalists in Mexico City.

Attorney General Eduardo Medina Mora announced draft legislation that would amend Article 73 of Mexico’s political constitution and would make a federal offense any crime causing “social alarm,” including threats to freedom of expression. 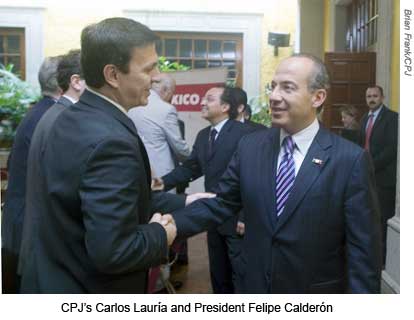 “The government agrees with the idea of federalizing crimes against freedom of expression,” Calderón said. He said the proposed legislation would be brought before Congress at its next session in September.

Calderón met with a CPJ delegation led by board Chairman Paul Steiger and Executive Director Joel Simon at his official residence, Los Pinos. CPJ expressed concern at ongoing violence against journalists who cover organized crime and official corruption, and highlighted the climate of fear in which the Mexican media work.

“The most important threat to independent journalists in Mexico is the same threat faced by society as a whole—organized crime,” Calderón said.

The delegation acknowledged the federal government’s stated intention of creating a safer environment for the media, and noted that Calderón had signed a landmark bill in 2007 that effectively eliminated criminal penalties at the federal level for defamation.

CPJ’s mission to Mexico City was prompted by an unprecedented wave of violence against the Mexican media, and the failure of authorities to investigate and effectively prosecute crimes against the press. The delegation spent three days in Mexico City meeting with editors, publishers, human rights activists, and top government officials. On Saturday, CPJ convened a panel of provincial journalists, prominent Mexico City reporters, and foreign correspondents to discuss coverage of organized crime.

Also on Saturday, CPJ launched a special report, “Three Killings, No Justice,” which delves into the unsolved cases of slain journalists Francisco Ortiz Franco in Tijuana, Bradley Will in Oaxaca, and Amado Ramírez in Acapulco. The report, written and researched by CPJ’s Mexico consultant Monica Campbell, looks at the factors that prevent cases of killed journalists in Mexico from being solved. The cases share certain characteristics. Because of shoddy police work, fear, or political pressure, the investigations failed to move forward.

Mexico is one of the most dangerous places for journalists in Latin America, CPJ research shows. In the last five years, as the war between powerful drug cartels has intensified, local journalists who report on organized crime and the drug trade are facing grave risks. Twenty-one journalists have been killed in Mexico since 2000, seven of them in direct reprisal for their work. Since 2005, seven others have gone missing. Mexico ranks tenth on CPJ’s Impunity Index, a list of countries where journalists are slain and governments consistently fail to solve the crimes.

Though the battle between cartels is particularly severe in the northern states, violence has spread to almost every Mexican state this year. The toll has been devastating—4,000 organized crime-related murders since Calderón took office a year and a half ago, according to press reports.

Violence and fear has had a devastating effect on the press, as reporters who cover crime and drug violence have increasingly resorted to self-censorship. The wave of violence against the press is curtailing journalists’ ability to report the news. Drug trafficking, crime, corruption, and other issues that affect the daily lives of ordinary people are not being covered.

In early 2006, the Mexican government recognized violence against the press as a national problem by creating a special prosecutor’s office. Unfortunately, the justice system has failed to end the violence and appears far from solving any of the recent murders.

More On:
Alerts
Americas
Mexico
More On:
Bradley Will