New York, January 31, 2008—As part of its ongoing campaign to urge China to adopt reforms promised when the International Olympic Committee awarded the country the 2008 Olympics, CPJ today delivered more than 500 advocacy cards to the Chinese Consulate in New York urging the government to release 29 jailed journalists. 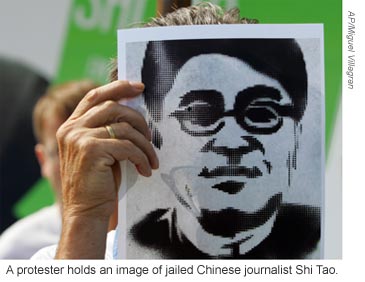 The IOC granted China the Olympics based on assurances that authorities would allow the media “complete freedom,” and that they would apply “no restrictions” to coverage. But China remains the world’s leading jailer of journalists, with 29 in prison, and the government still imposes severe constraints on the national media. The nation has failed to adopt the hallmarks of a free and open press.

“The world will be watching this summer to see if China lives up to its promises to allow complete media freedom at the Games,” said CPJ Board Chair Paul Steiger. “Releasing the 29 writers and editors jailed in China for their work would be a great starting point. This is an opportunity for China to match its enormous economic and technical growth with a freer press.”

At the 2007 International Press Freedom Awards, CPJ distributed advocacy cards asking for President Hu Jintao to meet these goals and free the journalists languishing in Chinese prisons before the Games’ opening ceremony in August. More than 500 people signed the cards, including Dan Rather, Scott Pelley, and CPJ’s IPFA award-winners Dmitry Muratov and Mahzar Abbas. In addition to these distinguished journalists, members of the United Nations, the BBC, and CNN also signed card.

The cards were delivered by hand today to Deputy Consul General Kuang Weilin at the Chinese Consulate in New York. CPJ met previously with the deputy consul general in October, and is confident that the strong message sent by such a large number of signatories will reach President Hu.

CPJ also launched an online petition today urging China to adopt its promised reforms in the run-up to the 2008 Games. Members of the public may sign CPJ’s online petition and have their voices heard. Those names will be collected and submitted formally later this year.