Across the Middle East, political reform gained momentum in the aftermath of the September 11, 2001, attacks on the United States and the U.S.-led invasion of Iraq in March 2003. Egyptians 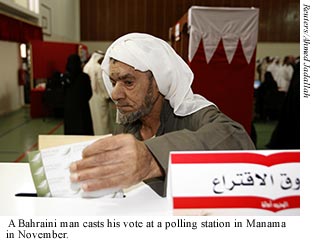 and Lebanese clamored for democracy; elections in Iraq, Palestine, Yemen, and Saudi Arabia offered a more pluralistic future. In a number of Arab countries, the media seized the moment. Newspapers in Egypt and Yemen smashed long-held taboos by openly criticizing political leaders, while in Iraq the toppling of Saddam Hussein opened the way for a vibrant news media. Autocrats known for smothering dissent suddenly touted the virtues of democracy, a system of government that U.S. President George W. Bush, buoyed by initial military success in Iraq, vowed to spread across a region of princes and potentates.

Those heady days seem a distant memory. The Bush democratization plan barely got off the ground. Washington’s prodding of several regional allies proved fleeting. Middle East autocrats thwarted significant reform altogether or implemented mere cosmetic changes. “[Bush] promised the sky and obviously could not deliver,” said Marina Ottaway, director of the Middle East program at the Carnegie Endowment for International Peace. “U.S. strategies do not do anything about the central problem in the Middle East: How do you diminish the power of omnipotent executives?”

The implications are clear. Change, if it comes at all, will take many years. And while international pressure is important, sustained effort from within is essential.

Political reformers and press freedom advocates whose expectations may have been raised by the Bush administration ran into regional realities: entrenched, authoritarian elites in countries such as Egypt, Saudi Arabia, and Morocco; and what became murderous chaos in Iraq. Of the 34 journalists killed in the Middle East and North Africa in 2006, 32 died in Iraq, most at the hands of assassins. Outside Iraq, scores of journalists who challenged the political order were threatened by government agents, hauled before the courts, thrown in prison, or censored in media crackdowns that stretched from Algeria to Yemen.

The Bush administration was able to engineer elections in Iraq, which it touted as a democratic model for the Middle East. But the carnage did not stop, and journalists found themselves in the middle. Not only were they targeted by murderers, they also came under political fire from government officials angered by their reporting. A growing list of Iraqi journalists endured harassment, censorship, or criminal prosecution under crude laws revived from Saddam Hussein’s regime. Others were detained and harassed by the security forces. The government continued to arbitrarily ban satellite broadcasters, as it did in September when it shuttered the Baghdad bureau of the Dubai-based satellite channel Al-Arabiya for a month on vague charges of fomenting “sectarian violence and war in Iraq.”

With few checks on their powers, governments across the region preyed on critical journalists, using draconian press laws or outright intimidation. When U.S. pressure was at its peak after the 2003 Iraq invasion, Egyptian President Hosni Mubarak promised reforms that included the repeal of prison penalties for so-called press offenses. But by 2006, criminal penalties remained on the books, and a slew of Egyptian journalists faced the prospect of jail time for their critical writing. Egyptian journalists still spoke out but were confronted by arrests, lawsuits, and state-sponsored assaults. The government, like others in the region, maintained its tight hold on media ownership. “The broadcast media is still in the hands of the government, and [so is] 90 percent of the print press,” remarked independent newspaper publisher Hisham Qassem, lamenting how the government has stalled the democratic reform movement. “You need credible media for civilians to address public opinion.”

Half measures were the norm elsewhere in the region. Saudi Arabia, under enormous international pressure to open up its closed society following the 9/11 attacks, which were carried out mainly by Saudi nationals, initially loosened the shackles on its heavily censored press. Newspapers launched an unprecedented debate about the role of the country’s powerful religious establishment in promoting extremism. But those once-promising media advances were followed by a government crackdown that included serial dismissals of outspoken writers and threats to others. That trend carried through to 2006, when, in April, journalist Rabah al-Quwai’ was jailed for 13 days in retaliation for his writing about religious extremism. While Saudi media are freer than they have been in recent history, the government still bars them from covering central issues such as government corruption and the activities of the royal family.

Jordan’s King Abdullah II has burnished an image of a reforming monarch, often telling journalists that the “sky is the limit” for press freedom. But reporters continue to chafe under an all-powerful security apparatus that has infiltrated much of the media and engendered widespread self-censorship. In May, security agents interrogated editor Fahd al-Rimawi for more than six hours over an article that cast a critical eye on an official announcement that the government had uncovered a Hamas arms cache. A month later, agents abruptly halted a live Al-Jazeera interview with the brother-in-law of the deceased Iraqi insurgent Abu Musab al-Zarqawi, briefly detaining interviewer Yasser Abu Hilala and his crew.

Press freedom in Libya, Tunisia, Oman, and the United Arab Emirates is either nonexistent or heavily constrained. And Syria pursues a relentless crackdown on dissidents that includes arrests of Internet journalists and bloggers.

The situation seems to beg the question of whether autocrats can be asked to reform themselves. In his 2005 inaugural address, President Bush pledged to “encourage reform in other governments by making clear that success in our relations will require the decent treatment of their own people.” But the unraveling of the Bush strategy in Iraq has consumed Washington’s attention and made the United States less bullish in advocating real change throughout the region.

In February, then-Defense Secretary Donald Rumsfeld held security talks with leaders in Algeria and Tunisia, both of which have abysmal press freedom records. That very month, the government of Algerian President Abdelaziz Bouteflika effectively decreed that the media could not investigate human rights abuses that occurred during the 1990s civil war, including the murders of at least 58 journalists. And editor Mohamed Benchicou was still languishing in prison, completing a two-year sentence for his criticism of Bouteflika’s presidency. In Tunisia, human rights lawyer Mohamed Abbou was behind bars for having published an Internet article that compared torture in Tunisia’s prisons to conditions in Iraq’s infamous Abu Ghraib; other journalists and rights defenders remained under relentless pressure from the state security operation.

Yet for all the discouraging trends, there is hope.

If authoritarian regimes are firmly entrenched, a new political dynamism is evident. Attacks against the press are on the rise in many countries precisely because journalists are becoming more outspoken in their criticism. Writers in Egypt, Morocco, and Yemen have aggressively seized on political openings to publish daring news and commentary that would have been unprintable just a few years ago. In the press, a small pack of independent journalists has pushed the boundaries of what is tolerated in print by exposing corruption and government misdeeds. The wall of fear that once prevented citizens from freely expressing themselves has eroded, even in the most repressive countries.

Most dramatically, the state’s monopoly on information has been broken in recent years by the preponderance of satellite television and the Internet. “The days when states ran public debate are over,” noted Amr Hamzawy, a senior analyst at the Carnegie Endowment for International Peace. If calls for political reform have yielded few concrete results, they have produced unprecedented debate about democracy and pluralism, Hamzawy said. Popular channels such as Al-Jazeera have created a public expectation that the truth can be uncovered and the powerful held to account.

The prospects for achieving greater press freedom vary by country, but journalists in nations such as Egypt, Morocco, and Yemen express hope. “I am optimistic, not because the regime is allowing freedom of expression, but because I reckon that the internal forces in society are moving toward openness and liberalization,” said Moroccan publisher Aboubakr Jamaï, who has weathered repeated government attempts to shut down his fiercely independent weekly Le Journal Hebdomadaire. “Having a free press is a demand of our society. The problem is that it isn’t coming as rapidly as society would like, or demands.” One indication is that papers such as Le Journal are more popular than ever despite severe pressure from officials.

In Egypt, democracy activists and independent journalists incur the wrath of authorities, but they continue to promote a robust political debate in the press and online. Even in the most politically closed states, like Syria, intellectuals and bloggers strike up debates that would have been impossible not so many years ago.

The struggle for an effective free press is destined to be long, arduous, and buffeted by wider political forces. In many nations, the continuing absence of independent political institutions and the pervasive presence of state security services hinder the ability of the press to grow and to exert influence.

“I’ve come to the conclusion that I will never live in a Westminster-style democracy in Egypt,” publisher Qassem said. “I will be part of the transition. Basically, there is no infrastructure here, and that is the problem.” Infrastructure, for Qassem, includes not only judicial independence and effective political parties but also unfettered, commercially viable, and broad-based media.

Ultimately, political and media reforms are two sides of the same coin. “You need to have both processes happening at the same time,” said Morocco’s Jamaï. “They go hand in hand.” Change, where it occurs, will be incremental, and journalists will be required to battle to preserve and expand the small pockets of independence they have carved out, especially in the all-important electronic media. In doing so, they lay the foundation for a true Fourth Estate.