Civil scenarios from crime scenes to riots can generate unpredictable and dangerous conditions. Journalists need to be mindful of self-protection measures to avoid putting themselves at physical or legal risk.

Civil scenarios from crime scenes to riots can generate unpredictable and dangerous conditions. Journalists need to be mindful of self-protection measures to avoid putting themselves at physical or legal risk. 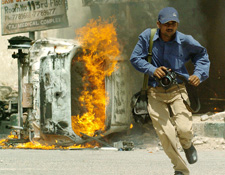 The first responsibility of anyone among the early or “first responders”—including police, ambulance workers, and firefighters, as well as journalists—is to protect one’s self by surveying the scene and being aware of potential hazards, such as oncoming traffic, downed power lines, and the leaking of combustible fuel or hazardous chemicals or gases. As in other situations, you should be close enough to observe the scene without endangering yourself or others, or interfering with security or rescue operations. Photojournalists should apply similar judgment, understanding that they must be close enough to record the events. Authorities usually establish a perimeter in order to keep onlookers, including journalists, at a distance; you may request, but cannot usually demand, a closer vantage point than other onlookers. That said, authorities should be encouraged to provide journalists with a vantage that allows them a clear view of operations. Toward that end, editors should discuss access issues with senior police and emergency officials on an ongoing basis and develop mutually agreed-upon guidelines for news coverage at emergency scenes.

Crossing police lines or disobeying police orders could lead to arrest. Being respectful in both tone and demeanor is usually the best way to proceed. Journalists covering emergency or rescue scenes should also prominently display their press credentials at all times.

Confrontations sometimes arise between authorities and journalists covering a scene. U.S. reporter Diane Bukowski was found guilty of crimes including obstructing and endangering two Michigan state troopers while covering the aftermath of a fatal crash involving a motorcyclist who was pursued by a state police vehicle. Authorities claimed Bukowski crossed a police line; Bukowski claimed she did not cross a line and was taking pictures at a distance of one of the deceased.

Violent crime scenes may be more complicated to cover. Self-protection is again the first rule. One question to ask is whether perpetrators may still be at large in the area.

Clearly display credentials at crime scenes, including local government-issued credentials whenever possible. (See the section on Press Credentials in Chapter 1.) Avoid confrontations with authorities; at such times, having relationships with senior law enforcement officials is useful. (See the section on Basic Preparedness in Chapter 5.) Avoid contact with material that is potential evidence; do not remove any material from the crime scene.

You do not have a right to trespass on private property in pursuit of a story. Journalists may enjoy some limited access to private property when covering publicly advertised political rallies or events. Learn in advance the relevant laws and regulations.

Journalists in the United States and other nations may not enter private property without the consent of the owner or resident, even if they have been accompanying police authorities responding to a situation. “Even when reporters gain access without being stopped, they can be arrested for trespass and property owners may sue them after the fact, seeking damages for trespass or invasion of privacy,” the U.S.-based Reporters Committee for Freedom of the Press notes in its field guide.

In most nations, you have the right to access private property when it is open to the public at large, although your right to electronically record events, as opposed to simply taking notes, may still be limited. Political events or rallies that take place on private property, which could be deemed to include the rented space or field of a public school or other government facility, are often contentious sites between authorities and journalists. Courts frequently hold that the private owners or renters of the space (even if it is a publicly owned property like a park or school) have the right to deny journalists the use of video cameras or audio recorders, and to ask journalists to leave the premises if they refuse.

Journalists who refuse to leave may be arrested for criminal trespass in the United States and other nations. Some journalists maintain that they were not given time to leave after being ordered off the premises. In 2010, Alaska Dispatch editor Tony Hopfinger was detained and handcuffed by a private security guard after asking questions of a U.S. Senate candidate following a publicly advertised meeting in a public school rented by the campaign. Police arrived, removed the handcuffs, and released Hopfinger, who was not charged with a crime.

Journalists need to be prepared and use care in covering events on or near private property. Clearly displaying press credentials at all times when reporting stories on private property is recommended. 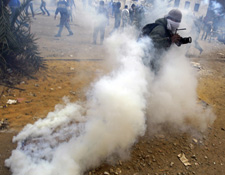 Physical fitness is an important consideration in covering situations that could suddenly turn violent; journalists whose mobility is limited should weigh the risks in advance. Being mindful of one’s location at all times is also essential, and this usually means finding a vantage point that allows for observation of both protesters and riot police or other authorities without ending up between them. Be aware of how such events have played out in the same locations in the past. Map out exit routes in advance, and consider working in teams when covering any potentially violent situation. Photographer and writer teams, camera operator and sound operator teams, and producer and correspondent teams allow journalists to watch out for each other.

In many nations, news organizations have hired security teams to accompany journalists. The spate of attacks against journalists during the 2011 Egyptian revolution and aftermath underscored the violent situations journalists can encounter during civil unrest. Journalists should also know the relevant laws and practices in case either law enforcement agents or protesters demand to review or confiscate video cartridges or other recording material.

Clothing should be chosen thoughtfully, including whether it would be better to stand out or blend in. Clothes should be loose-fitting and made of natural or fire retardant fabric, as synthetic materials can catch fire and burn much more quickly, the Brussels-based International Federation of Journalists notes. Good shoes with appropriate support and flexible, non-slip soles are also essential.

Consider what to bring when covering a protest or similar event. A grab bag with a small first aid kit, water bottle, wash cloth, eye protection, respirator mask, flashlight, and a copy of your ID or press card is advisable. Ideally, the kit should fit tightly strapped to your body and everything should be expandable.

In particularly uncontrolled situations, it might be advisable to use light body-armor vests designed to stop knives or rubber bullets as well as metal-lined caps.

When there is likely to be smoke, ensure that you have effective protection for the mouth, nose, and eyes. If tear gas is a possibility, then it is advisable to carry a full-face respirator (gas mask).

The International Federation of Journalists recommends that videographers and photographers carry “dud” cartridges or memory cards in case authorities demand to see your work.

Whether to display one’s press credentials or keep them out of sight (but still handy enough to show on demand) is an important decision for writers covering civil unrest. In some circumstances, it may be better to look like any other civilian and keep your press credentials out of sight but in a closed and quickly accessible pocket, as Bärlocher suggests on J-Source. In situations where being mistaken for a demonstrator could be dangerous, all journalists should clearly display their press credentials. If you are wearing press credentials, it is best not to wear them on a lanyard around your neck. In a scrum or confrontation, the lanyard can be grabbed and used to strangle you.

When covering violent protests, it is important to decide if you will position yourself on the protesters’ or the authorities’ side. This decision will determine your threat exposure, depending on the actions of either side. Avoid at all costs ending up between protesters and authorities; this is the most dangerous location.

Never pick up anything thrown at a demonstration. Not only could it be a homemade explosive or combustible device, but doing so may make police presume that you are a protester.

Position yourself at the edge of the crowd and try to avoid going into the heart of the action. In dynamic situations, keep re-evaluating your exit strategy. Watch for any combat indicators, such as if police start reinforcing numbers or donning riot gear, which can be your cue to pull back.

If you are in a team, stay together. If confronted, link arms or grab each other’s belts; keep one hand free and move with short deliberate steps to avoid falling.

If you encounter aggression, maintain eye contact with the aggressor. Use open hand gestures and keep talking with a calm manner while backing away. Keep an extended arm’s length from the threat at all times. If cornered, shout for help. A whistle or a rape alarm can be useful to distract or confuse attackers so that you can get away if they get too close.

Riot control agents (tear gas or pepper spray) are frequently used by authorities. Be aware that the canisters are normally delivered in a grenade canister or fired from a baton gun and, if fired directly at crowds, they can cause significant injury and even death.

Tear gas attacks the lungs. I so if you suffer from any sort of respiratory ailment such as asthma, you should consider if you should be exposed. Tear gas is heavier than air, so it often sits just above the ground if there is no wind to disperse it. If used in high concentrations, particularly in built up areas, the gas can be a serious health hazard.

Riot control agents are designed to react with moisture to cause a burning sensation. Eyes, throats, and noses are particularly at risk. The effects usually wear off after approximately an hour, but skin may remain irritated for hours.

If you are a victim of tear gas, move away from the affected area. If your eyes are unprotected, it will be hard to see. Always try to take notice of curbs or objects you will be able to feel that can guide you out of the area. Stand in fresh air to allow the breeze to carry away the gas. Wash exposed skin with soap and water. When you have access to a shower, first use cold water and then warm.

Journalists should obey orders from law enforcement officers, although authorities sometimes arrest journalists without giving orders first. At least four journalists were among hundreds arrested while covering protests related to the 2008 Republican National Convention in St. Paul, Minnesota. The journalists were arrested without warning as police attempted to corral protesters and journalists covering their actions into a fenced parking lot. Days later, police arrested dozens of journalists along with hundreds of protesters after sealing off both sides of a highway overpass.

Remain calm if you are arrested. If you choose to object to the arresting officer, you may worsen your situation. If you do speak up, make every effort to maintain a professional demeanor as you explain that you are a journalist covering news. (Whatever sympathies you may have for any actors on the ground are beside the point; what is always important is that a journalist act on the ground not like a participant but as an observer.) If the authorities decide to proceed with the arrest, comply with orders and wait for an opportunity to make your case calmly to a supervising authority.