CPJ asked Manuel Vázquez Portal, a Cuban writer, poet, and journalist swept up in the 2003 crackdown, to describe the year he spent in prison before being freed in 2004. He chose to describe his imprisonment in nightmare imagery. Vázquez Portal now lives and works in Miami. 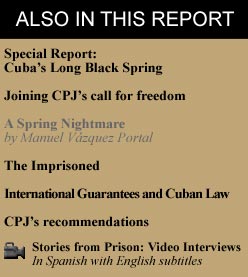 His obscene symphony reverberates in my ear. With a slap of my hand I put an end to his fragile ferocity. Now, perhaps, he’s just a disemboweled black smudge, somewhere in the semidarkness. Or perhaps he escaped the blow. Either way, I’ve been startled awake.

At midday the lizards eat the mosquitoes. Then come the rats to eat the lizards. I can’t eat. Dinner reeks of putrefaction. My stomach rebels against me, my intestines clench and scream. Scream like a hungry rat. But my throat contracts, blocking the entrance of that rotting pigswill. I wake up vomiting.

At night the mosquitoes return with their monotonous music. It’s hot as an oven and oppressively dark. They stave off all chances for sleep. They spy on me. They besiege me. I pretend to sleep so that they will come close. I slap at them, assassinate them. But there are many. They gather all over my body. There are many. They puncture me, drain my blood. They smother me. I revive myself in the darkness, covered in welts.

This is a recurring dream, frightened away today by a swat of my hand only to return tomorrow intact. The dream persists, as though rooted in me. Someone is whimpering disconsolately, like a lost child. He’s misplaced his little tin soldiers, his childhood sweetheart, his book of poems. He carries his entrails in one hand. They stab him in the patio where he was roasting in the sun. No one hears. Someone is singing, perhaps it’s to exorcize his fear. The song is sad. It tells of unrequited love. By dawn he’s been hanged. No one heard it happen. There’s too much screaming on the inside to hear anyone else’s cries. But I can see it all. My eyes sweat from the effort. Or have I woken up crying again?

I try to sleep. I ascend to the whitest reaches of my soul. I climb to the heights of my innocence. I know that I am innocent. My sin is to love liberty, justice, and beauty. I float. I’m on the verge of bliss. But suddenly pins are piercing my nose and lungs. I sneeze. My nose runs. I gasp for air. The Turkish toilet has overflowed and the excrement rises toward my prisoner’s cot. There’s no water. I can’t wash. I can’t tidy up. It hits me that I’m imprisoned. That my room is a prison cell measuring five feet in width. That justice has also been held captive by my jailers. I’ve no one to complain to. Perhaps the rest of the world will sympathize with me. And then a hand gently caresses my hair, and the voice of Yolanda becomes music, telling me that Saturday there’s a party at Gabriel’s school. I smile weakly. It was only the nightmare again, I tell myself.

But what has become my nightmare today is in fact the reality for Héctor Maseda Gutiérrez and José Ubaldo Izquierdo, for Omar Ruíz Hernández and Juan Carlos Herrera, for Normando Hernández González and Ricardo González Alfonso, who still live this terror after five years in a Cuban jail. And I know that they are innocent. That their crime, too, is the love of liberty, justice, and beauty. We were journalists. We sought out the truth. And we told it. For this, the Cuban government cast us onto the dung heap with the rats, the mosquitoes, the inedible food and the lack of water, the filthy cellblocks and the malicious prison guards.

My nightmare today is the daily suffering of Pablo Pacheco Ávila and Fabio Prieto Llorente and Julio César Gálvez Rodríguez, making Cuba the second-leading jailer of journalists in the world, with 22 thrown in prison since March 2003. And though I know that this atrocious reality will become just a memory, a nightmare, I can’t comprehend the reason for their imprisonment.

And worse still, they have been imprisoned for five years, five years during which the world, standing in solidarity, hasn’t stopped calling for their freedom so that they, too, can attend a party at their children’s school some Saturday.

Translated from the Spanish by Karen Phillips/CPJ.