Cuba has dismissed criticism from Europe and the United States as efforts by ideological adversaries to undermine its government. In truth, many intellectuals from all parts of the political spectrum–including those on the left who have supported Castro and denounced U.S. policy toward the island–have also expressed indignation at the imprisonment and treatment of Cuban journalists. 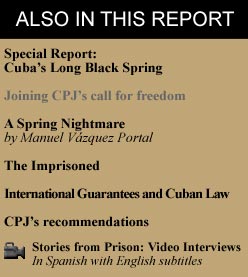 “Freedom of expression is an irreplaceable support for freedom of conscience, on which is founded modern political democracy as well as any other regime that hopes for international respect,” said Spanish philosopher, writer, and activist Fernando Savater. “The jailing of dissident journalists holds hostage not only their liberties but also the liberty of the entire Cuban people, who deserve to know the political alternatives to the dictatorial regime under which they suffer today.”

Three other European writers–the Spanish authors Antonio Muñoz Molina and Juan Goytisolo and the Polish journalist Adam Michnik–also voiced support for the liberation of the jailed Cuban journalists when contacted by CPJ.

Throughout the Americas, writers, journalists, lawyers, and activists condemned the situation as well. In the United States, linguist Noam Chomsky said he supported CPJ’s call for the release of those imprisoned–as did Nicaraguan lawyer, journalist, and writer Sergio Ramírez and one of Argentina’s most prominent writers and journalists, Tomás Eloy Martínez.

CPJ contacted these writers as part of its ongoing effort to draw international attention to the plight of Cuba’s independent press. In 2005, more 100 writers and editors joined with CPJ in an open letter to Fidel Castro that sought the release of those unjustly jailed. Carlos Monsiváis, one of Mexico’s best-known contemporary writers, was one of those who signed the 2005 letter. He reiterated his stance in comments to CPJ this year.

“Just as we don’t accept the monstrosity of the [U.S.] blockade and embargo against Cuba, it is not possible to allow the shutting of freedom of expression under an authoritarian ideal,” Monsiváis told CPJ. “If we demand freedom for those journalists who are jailed, it is because we also defend Cuba’s right to live without the pressures of American imperialism.” Two other Mexican writers–Elena Poniatowska and Laura Esquivel–also expressed their fervent support for the release of the 22 jailed reporters. Colombian novelist Laura Restrepo and South African author J. M. Coetzee said they, too, supported CPJ’s call for the journalists’ release.

Several said political considerations should be set aside in freeing those in jail.

“As someone who has always celebrated the achievements of the Cuban Revolution, and particularly its health care and educational systems, I am saddened and outraged each time that freedom of expression is suppressed in Cuba,” said Chilean novelist, playwright, essayist, and human rights activist Ariel Dorfman.