Three reporters tell CPJ about the dangers of reporting from Iraq.

Also in this report:

New York, March 18, 2008–Five years after the start of the war in Iraq, reporting “has become a much more complicated proposition,” says James Glanz, Baghdad bureau chief for The New York Times. Glanz is one of three reporters the Committee to Protect Journalists interviewed about their experiences covering the conflict for a Web-based video report, Dateline Iraq. 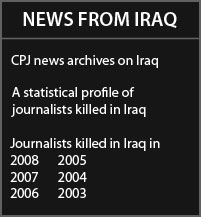 Glanz, Bobby Ghosh, Time magazine’s world editor, and freelance photographer Jehad Nga have all spent many months reporting in Iraq over the past five years. They talked to CPJ about the increasing obstacles and dangers journalists have faced covering the war in Iraq, the deadliest for the press ever recorded by CPJ.

Obtaining reliable information is so difficult inside Iraq, Ghosh explains, that “you only get a sort of kaleidoscope; you get little bits and shards of information.” Nga describes the difference between reporting in Iraq in 2003 and in 2008 as “night and day.”

Transcripts containing highlights of the three interviews are available on CPJ’s Web site.

According to CPJ research, 127 journalists and 50 media workers have been killed in Iraq since the war started in March 2003. The vast majority of those killed have been local Iraqi journalists.

To learn more about the dangers journalists face in Iraq and in other countries around the world, become a CPJ member.