In Argentina, millions of pesos in government advertising are distributed without clear rules or standards. News coverage is influenced as critics are punished and government-friendly outlets are rewarded.
RÍO GALLEGOS, Argentina

In this southern provincial capital, hometown of President Néstor Kirchner, the daily El Periódico Austral has acted as the government’s megaphone since its launch in March 2003. Only the death of Pope John Paul II in April 2005 pushed the Argentine president off the front page. The publication scooped every major media outlet by announcing in July the presidential candidacy of Kirchner’s wife, Sen. Cristina Fernández. The first lady, frontrunner in the October 28 election, has replaced her husband as the paper’s star ever since. 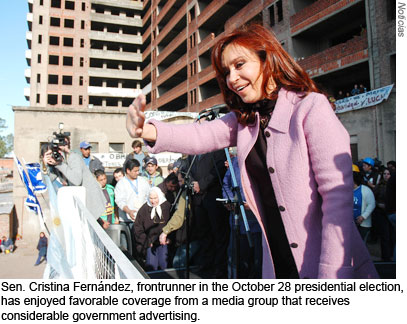 The free, 8,000-circulation newspaper, distributed throughout the province of Santa Cruz, is part of a provincial media conglomerate led by Rudy Ulloa Igor, Kirchner’s former chauffer and one of his closest advisors. Ulloa’s media group–which comprises a radio station, two television stations, and two production companies–received more than 3 million pesos (US$960,000) in official advertising in 2006, according to María O’Donnell, a well-known journalist and author of Propaganda K: Una Maquinaria de Promoción con Dinero del Estado (Propaganda K: A State Financed Promotional Machinery). Ad revenue for the provincial media company was so good that it exceeded that of many news outlets with national reach.

The story of Ulloa’s media group is a window into a national phenomenon that the Committee to Protect and Journalists has found damaging to press freedom. “Government at all levels uses official advertising to disseminate propaganda instead of relevant information for the citizen,” wrote O’Donnell, who based her conclusions on official government advertising data. “But no president in history has invested as much as Kirchner in this venture.”

In the months leading up to the national election, the Kirchner administration has flooded the market with official advertising. In the first half of 2007, the national government spent more than 164 million pesos (US$51 million), an increase of 63 percent over the same period in 2006, according to a report by the Asociación por los Derechos Civiles (ADC), a nonpartisan group that promotes constitutional rights. The government cites inflation, but the advertising increase is many times the inflation rate, the study showed. CPJ’s independent review of advertising data found comparable trends.

Government ads publicize such things as hospital services and school programs, and they inform citizens of obligations and rights. In some cases, the ads simply promote the routine activities of office-holders. Such advertising, particularly in provincial areas such as Santa Cruz, can constitute a large portion of a media outlet’s revenue.

Because national and local governments are not bound by clear rules governing the placement of their advertising, CPJ and other analysts have found, the targeted influx of ad dollars influences coverage–including news about the presidential and legislative elections. News outlets that provide favorable coverage of incumbents get lots of ads; organizations that are critical get few or none.

National government advertising is bound by two decrees that leave officials with broad discretion. Under a 1971 decree, all advertising transactions must be conducted through Télam, the official news agency. And a 1996 decree makes the national government’s press secretary responsible for setting priorities and assigning funds for ad campaigns. Neither decree seeks to ensure an objective, market-based approach to ad placement.

Free press advocates have contended that manipulative government advertising violates Articles 14 and 32 of the Argentine Constitution, which bar censorship and guarantee press freedom, and Article 13 of the American Convention on Human Rights, which bars indirect means of media control. Court cases challenging Argentina’s current advertising practices could lead to reforms. In one case, decided in September, the Supreme Court found that the provincial government of Neuquén had improperly discriminated against a media outlet in its advertising.

Since Néstor Kirchner became president in 2003, his administration’s advertising budget has jumped 354 percent, according to figures compiled by Poder Ciudadano, a nongovernmental organization that promotes civic participation. In effect, analysts say, Kirchner has replicated nationally what he did during his three terms as governor of Santa Cruz–imposing a system of rewards for friendly media outlets and advertising embargoes on critics. Such a system remains in place today in Santa Cruz, a province of nearly 200,000 in the southernmost tip of the Patagonia, CPJ found in a fact-finding mission conducted in August.

Known for its oil riches and breathtaking glaciers, the province was considered an outpost in national politics until Kirchner’s emergence as a popular and powerful governor. As president, he’s continued to keep a tight hold on provincial politics, handpicking close allies as gubernatorial candidates and as top appointees. Besides El Periódico Austral, the capital city of Río Gallegos has three other dailies: La Opinión Austral,the oldest paper in the province; Tiempo Sur; and Prensa Libre. Three private television stations and about four-dozen FM radio stations also compete for ads. Nearly all local media rely on government advertising revenue, putting managers under heavy pressure to avoid critical stories that could hurt their own bottom line.

“Without state advertising it is almost impossible to survive,” said Daniel Gatti, host of two radio shows on FM Abril, a Congressional candidate, and one of Kirchner’s harshest critics. Gatti, who wrote a 2003 biography of the president titled Kirchner, el Amo del Feudo (Kirchner, Lord of the Domain), said that the government “is the main advertising wallet” in Santa Cruz.

One provincial official reasons that Santa Cruz can’t be doing anything improper because there are no rules to determine what is proper. “As there are no regulations, we implement the law of supply and demand,” Roque Alfredo Ocampo, the Santa Cruz minister of government, told CPJ. He acknowledged that Ulloa’s media group and other outlets receive more money than others, but he insisted that disparities are the product of a system without rules. Provincial data reviewed by CPJ shows that Ulloa’s media group received 879,360 pesos (US$275,000) in the first five months of 2007, a figure many times higher than that of other provincial outlets. 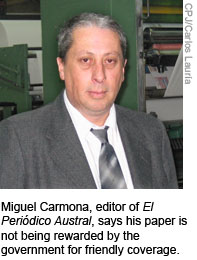 Miguel Carmona, El Periódico’s editor, denied that his paper is being rewarded as a friendly media outlet, and he downplayed any benefits the Ulloa group has derived. After all, he said, the newspaper leases its cars and facilities, and the boss himself drives a car that’s a year old. “Perhaps people are bothered by the fact that [Ulloa] is a friend of the president,” Carmona said. A request to interview Ulloa, made through Carmona, was declined.

Recent events suggest a correlation between government advertising and the tone and volume of coverage, according to a CPJ analysis. A six-month strike by teachers and other state workers that began in March led to weekly protests that drew thousands into the streets. In a province ordinarily supportive of the government and the Kirchners, it was an extraordinary display.

You would not know it from much of the news coverage. El Periódico Austral and the other Ulloa media outlets ignored the conflict until it made headlines in the national press. Since then, they have played down its importance. Angered by what they perceived as censorship in the official media, demonstrators organized a boycott of cable subscription to Ulloa’s Channel 2 and staged several protests in front of El Periódico Austral. With a few exceptions on radio, other private media outlets went out of their way to avoid criticizing the government.

The crisis did highlight the emergence of highly critical FM radio stations as an alternative to the traditional press. Many citizens sought out these outlets as the only way to express their discontent, journalists said. FM News, a small privately owned station in Río Gallegos, in particular earned a reputation for uncompromising coverage. “This radio [station] turned into the people’s voice and changed the dynamic of the local media,” said Gatti about his competitors at FM News. 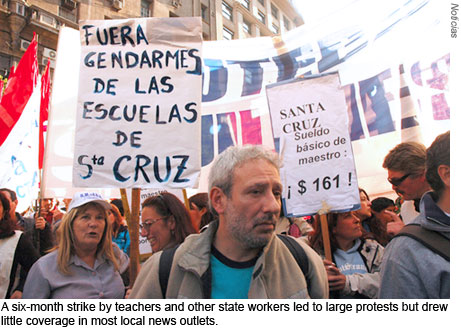 Rolando Vera and Hugo Moyano, FM News owners, said that they have been harassed, threatened, and persecuted because of their critical reporting. In May, the Federal Committee for Broadcasting ordered the seizure of the FM News’s equipment after national border police complained that the station’s frequency obscured their own. An injunction halted the seizure and allowed the station to continue on the air, but FM News and other local reporters believe the order came in reprisal for their burgeoning popularity.

“We have given ordinary people the chance to express themselves for the first time in many years. That’s the key of our success,” Rolando Vera, co-owner of FM News, told CPJ.

Outlets such as FM News notwithstanding, the allocation of state advertising in the absence of clear rules is causing serious damage to press freedom in Argentina, CPJ found. The system may be at a pivotal point, however. In September, the Supreme Court ruled that the province of Neuquén improperly withdrew lottery and other advertising from Río Negro after the daily ran a 2002 report on corruption in the local legislature.

In another closely watched case, the nation’s largest magazine publisher, Editorial Perfil, filed suit in July 2006 alleging discrimination in government advertising in retaliation for the group’s critical reporting. The case is pending.

Roberto Saba, ADC’s executive director, said he is optimistic given the Río Negro ruling. The most important result, he said, would be clear and transparent legislation that would “limit governments’ discretionary authority when allocating official advertising.”

The debate has prompted Congress to consider six different bills aimed at ensuring more objective distribution of official advertising. ADC and Poder Ciudadano have urged that the reforms include moratoriums on state advertising in periods just prior to elections. Whatever legislation emerges, however, will come long after this year’s discriminatory advertising practices have accomplished their purpose at the polls.


Carlos Lauría is CPJ’s senior program coordinator for the Americas.