In a country with few critical news sources, Radio Free Asia is taking on tough stories. As RFA puts the government on edge, its reporters are on edge. 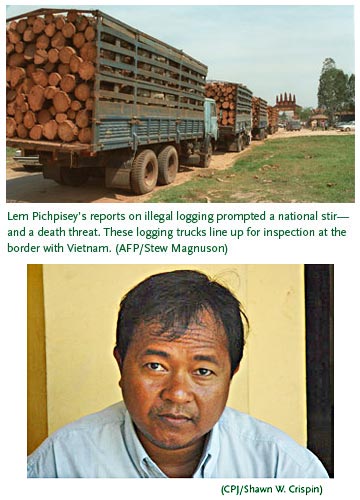 The threat came into Lem Pichpisey’s cell phone just days after he aired an investigative series about alleged government complicity in the illegal logging of a nationally protected forest. The anonymous caller told Lem, a reporter for Radio Free Asia (RFA), that he “could be killed” if he continued his critical news coverage from the area.

Lem traced the number to a roadside vendor in Phnom Penh who rented mobile phones by the minute to unregistered customers. The vendor could identify the caller only as a young Khmer man who sped off on a motorcycle after placing the call.

Lem was already on edge. After his undercover reports from the Prey Long reserve in central Kompong Thom province had caused a national stir, a source tipped him that government security officials were taking great interest in his work. His anxiety mounting, Lem fled in June to Thailand, where he remained for more than a month.

Despite calls from local and international press organizations, including CPJ, the Cambodian government has yet to launch an independent investigation into the death threat. Lem has since resumed reporting in Cambodia, but to limit the risk, senior editors have reduced his regular broadcasts from five to three stories per week and taken him off the Prey Long beat.

Even with the potential danger, Lem felt compelled to return to his home in Battambang province. “If I had stayed away from Cambodia any longer, I wouldn’t be able to help report the truth about my country’s problems,” he said in an interview with CPJ.

Lem’s story is a familiar one among the Cambodia-based reporters for RFA, the U.S. government-funded broadcaster. Since 2005, three of the station’s 14 regular and on-call reporters have fled the country due to concerns over potential government reprisals.

Journalists have often been caught in the crossfire of Cambodia’s violent political history. Reporters were rounded up and slaughtered during the Khmer Rouge’s notorious reign of terror from 1975 to 1979 and were frequently attacked in the more than decade-long civil war that followed the December 1978 invasion by Vietnam, which ousted the radical Maoist regime and installed Hun Sen as prime minister.

By 1993, U.N.-sponsored democratic elections had ushered in a new parliamentary system of government and a constitution that guaranteed free expression. The 1993 Press Law, which provides a legal framework for press freedom, forbids censorship and protects confidentiality of sources. In practice, however, enforcement of these legal guarantees is highly inconsistent. Cambodian journalists still work in a hostile environment, particularly in far-flung provincial areas where corrupt officials are involved in illegal activities and where the rule of law is weak.

Between October 2005 and January 2006, Hun Sen ordered the imprisonment of three journalists, two in connection with their reports on a controversial border treaty with Vietnam. The unsolved killings of six newspaper editors and reporters–from the country’s democratic transition in 1993 through the violent 1997 coup launched by Hun Sen against Prince Norodom Ranariddh, then the country’s co-prime minister–still hangs over Cambodia’s media like a sword. Ministry of Information officials frequently harass editors over stories that cast the government in an unfavorable light.

That is particularly true for RFA, whose journalists often report under pseudonyms for fear they could be the target of government retaliation.

During a question-and-answer session with local journalists in front of the country’s National Assembly in May, Hun Sen referred to RFA staffer Um Sarin as “insolent” and “rude” after the reporter questioned him about the details of a government shakeup. In the exchange, which was later broadcast on government-affiliated television stations, the premier pointed his finger at the reporter and called RFA’s reporting “insolent.”

As the premier’s bodyguards surrounded the reporter, Hun Sen warned Um Sarin that he should be afraid to ask similar questions in the future. For RFA journalists, the national attention given the incident raised fears of possible reprisals from pro-government groups. Um Sarin soon fled Cambodia for Thailand.

“We sometimes hit on the weak points of the government–corruption, poor governance, poverty, joblessness–which reflects on the government’s overall poor performance,” Um Sarin said. “We often contradict the government-controlled media, and that is the main reason Hun Sen is so angry with RFA.”

Hun Sen has consolidated his political power at the ballot box. His Cambodian People’s Party (CPP) and businesspeople loyal to the party who hold government-administered print and broadcast licenses now dominate the Khmer-language media landscape. There are 20 or so regularly published local-language newspapers, all but two of which are heavily slanted in favor of Hun Sen and the CPP.

The same is true for the country’s 11 television stations, which broadcast news that unfailingly casts Hun Sen’s government in a favorable light–portraying senior CPP officials opening new public works projects, meeting with admiring local citizens, and greeting foreign dignitaries. One leading news station is run by the prime minister’s daughter, while others are owned by senior CPP members or their close business associates.

But the CPP-led government does not have a monopoly on radio news. High illiteracy and poverty rates mean that radio reaches more Cambodians than any other news source. According to a 2006 survey conducted by Washington-based media consultants InterMedia, 29 percent of Cambodia’s 14 million people listen to international radio stations on a weekly basis.

RFA and the U.S. government-funded Voice of America are neck and neck in claiming the country’s largest listening audience, according to the survey. RFA’s reports are aired twice daily, once in the morning and again in the evening, over privately run Beehive FM 105 and on shortwave beamed from Washington.

InterMedia’s survey found that more than 31 percent of the population listened to RFA on a regular basis, while 56 percent of the population living within a 50-mile (80-kilometer) radius of Phnom Penh regularly tuned in. RFA’s Khmer service director, Sos Kem, said in an e-mail from Washington that he expects that RFA’s listening audience will grow substantially because Beehive Radio has recently increased its broadcasting power from 5 to 10 megawatts, extending the station’s coverage to more remote provinces.

Established in Cambodia soon after Hun Sen launched his 1997 coup, RFA immediately introduced a new, grassroots style of radio reporting, including on-the-ground sound bites from people affected by the news. RFA’s recent fare has included such reports from villagers affected by state-backed land grabs, illegal logging, and alleged official corruption. This unfettered approach to the news has, over the years, lured listeners away from state-controlled stations, which still focus on senior government officials’ statements and activities.

Cambodian Minister of Information Khieu Kanarith did not respond to CPJ’s requests for an interview, but the government is clearly not enamored of RFA’s work. In February 1999, RFA negotiated a contract with the Ministry of Information that would have allowed the broadcaster to establish its own FM station in Phnom Penh–only to see the ministry back out days later because of political concerns.

RFA soon moved to lease FM airtime from Phnom Penh-based Beehive Radio. As if in a chess match, the Ministry of Information then banned Beehive Radio from carrying the reports. Only after Beehive’s owner, Mam Sonando, lodged a formal complaint with parliament–citing provisions of the 1993 Press Law–was the station allowed to resume its broadcasts of RFA news reports.

Still, RFA’s broadcasts over Beehive Radio are aired on a 30-minute time lag from when they are originally transmitted from Washington–giving the Ministry of Information time to monitor RFA news reports before they go out over the national airwaves.

Pen Samitthy, editor-in-chief of Rasmei Kampuchea, Cambodia’s leading pro-government daily newspaper, and a Hun Sen associate, said that several government officials believe RFA’s coverage is slanted against the CPP and in favor of the political opposition. He cited in particular the station’s coverage leading up to last year’s commune elections, including reports that pro-CPP groups threatened opposition canvassers and intimidated their grassroots supporters into staying away from the polls. “They aired several stories that did not make the prime minister very happy,” Pen Samitthy said.

According to RFA editors in Washington and Phnom Penh, their reporters are frequently singled out for harassment by government officials. In December 2006, Hun Sen’s bodyguards prevented Lem from reporting on the opening of a new government-funded building in Battambang province. This past April, the premier’s bodyguards blocked RFA reporter Sok Ratha from covering the opening ceremony of a road project in remote Ratanakiri province.

“They ask me: ‘Why do you report like this? You are Khmer. Don’t you know this makes a bad international image for your country?'” said Ath Bonny, recalling a recent exchange with an official. “I said to him, ‘That’s what the people are saying and it’s the reality of the situation–that we are just doing our jobs as journalists, and that this is our country, too.”

Ath Bonny said RFA listeners often seek out the station’s reporters with their individual stories about local-level corruption. “Nowadays, the people don’t complain to the government or police, they complain to RFA,” he said. “Many people see us as a direct channel to communicate with their national leaders, and I think that makes the government nervous.”

RFA works out of an unmarked office in a multistory townhouse in the heart of Phnom Penh. Office managers affix RFA’s logo to the office’s steel-caged front door when guest speakers are scheduled for studio interviews, but quickly take it down after they have safely arrived, according to Ath Bonny.

“This is Cambodia–it is very difficult to judge who might make trouble for us,” he said. “We are often afraid, but we still do our work professionally.”

Like other RFA reporters, Ath Bonny speaks from personal experience. In October 2005, Hun Sen ordered the arrest and detention of Beehive Radio’s Mam Sonando and several civil-society activists for comments they made about a controversial border treaty with neighboring Vietnam. RFA had aired similar reports; Ath Bonny fled to Thailand for a time after a palace source told him that he, too, was in the government’s sights.

The arrests, though, sparked a bit of a backlash. Some local journalists said that Hun Sen’s government has since attempted a more sophisticated–or, at least, less overtly repressive–approach to its relations with the media. Under pressure from Western donor countries, which still contribute roughly half of the Cambodian government’s annual budget, the prime minister agreed in January 2006 to release Mam Sonando and the others. In August, he vowed to decriminalize defamation–although reporters could still be jailed on “disinformation” or broadly construed incitement charges.

“There’s been a change, at least in the language used,” said Charles McDermid, managing editor of the Phnom Penh Post, an English-language newspaper. “Now they’re at least talking about democracy.”

And Lem is still trying to break daring stories. In August, he aired a news report about alleged government involvement in illegal logging in southern Porsat province. “Where the government tries to hide, we try to show,” he said. “That’s the power of Cambodian radio.”