Yuri and Zoya Kholodov have devoted more than a decade to pursuing justice for their son Dmitry, a reporter for the Moscow newspaper Moskovsky Komsomolets, who was murdered in October 1994 after exposing high-level corruption in the Russian military. Kholodov, 27, was due to testify before parliament about his reports on illegal arms trafficking.

Six defendants, four of them intelligence officers, were acquitted in two separate military trials, in 2002 and 2004, of booby-trapping a briefcase given to the reporter. “The trials took a heavy toll on us,” Yuri Kholodov said. “The most excruciating and endless of pains you feel is the scream of your soul when someone murders your son or daughter, your most precious treasure in the world.” 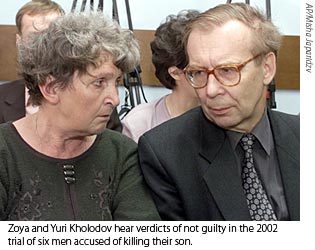 Now in their late 60s, Yuri and Zoya Kholodov have worked to keep their son’s death from vanishing from the public eye. By their account, they have pored over dozens of volumes of court transcripts to find flaws and oversights in the official investigation. Yuri Kholodov, a physicist, carried out his own tests of explosives to determine whether the bomb was intended to kill and whether it could have come from the airborne unit headed by one of the defendants. He hired forensics experts and sought, without success, to introduce the findings as evidence. The Kholodovs have given numerous interviews, advised the families of other journalists killed in Russia, and written a long series of letters to military, judicial, and human rights officials.

With the case closed in Russia and domestic appeals exhausted, the Kholodovs have turned to the European Court of Human Rights in Strasbourg, France. The court has authority to conduct an inquiry into the death, review the actions of the domestic court, and award compensation for flaws in the prosecution.

“In our city the people tell us never to give up,” said Yuri Kholodov, whose family lives in Klimovsk, south of Moscow.

Kholodov, 27, was killed in his own newsroom after retrieving from a source a briefcase that purportedly contained secret documents. A colleague, Katya Deyeva, was injured.

Russian military prosecutors argued that the six defendants killed Kholodov on orders from Pavel Grachyov, then defense minister. Grachyov, who had been named in many Kholodov articles, was never charged in the case. In court, Grachyov testified that he reacted to some of Kholodov’s articles by using expressions such as “break his legs” or “shut his mouth” but insisted his words were not a prescription for murder.

Two separate panels of judges sitting in the Moscow Military District Court found the suspects not guilty, saying the prosecution did not convincingly explain the motive or connect the defendants to the killing. The courts discounted the reported confessions of three of the defendants, saying they were either coerced or were unsupported by other evidence. A 2005 appeal was rebuffed.

Yuri and Zoya Kholodov question the impartiality of any military tribunal hearing a case in which serious allegations are made against high-ranking military officials. “We clearly understand that the courts were executing the orders of certain influential figures in entering the verdicts of not guilty,” Zoya Kholodov said. Russian military justice officials did not respond to CPJ’s requests for comment.

As evidence, the couple said the courts disregarded forensic evidence, adjourned the trial for long periods without explanation, and repeatedly failed to provide them with court records within the three days required by law. Witness testimony, they noted, changed from one trial to the next.

The European Court of Human Rights has agreed to hear the case, although it’s unclear how soon. In their complaint, the Kholodovs said the Russian legal system failed to properly and fairly investigate their son’s murder. In 2005, the European Court issued an important ruling in the slaying of another journalist, Ukrainian Internet editor Georgy Gongadze. The court ruled that Ukrainian authorities failed in their duty to protect Gongadze’s life, failed to thoroughly investigate his death by limiting their probe, and treated his widow in a degrading manner by not giving her access to materials in the case.

Maksim Rachkovsky, a lawyer for the Kholodovs, said the Russian case spotlights the justice system’s ongoing failure to solve the murders of journalists. “The authorities should feel particular responsibility for the lives of journalists because a democratic society cannot exist without a free press,” Rachkovsky said. “When journalists try to fight corruption with their investigative articles, they are forced into silence.”

As one of the first journalist killings in post-Soviet Russia, the Kholodov case is a milestone that resonates today, said Aleksei Simonov, president of the Moscow-based Glasnost Defense Foundation. CPJ has documented the deaths of 42 journalists in Russia over the past 15 years, many of them contract-style slayings and the vast majority unsolved. In case after case, families said they were abandoned by the justice system designed to protect them.

Zoya Kholodov said the appeal to the Strasbourg court is intended to be a complaint about the Russian system. “No value can be placed on a person’s life,” she said. “It’s not about compensation–the most important thing is that we’ve lost faith in justice.”

Heidi Hoogerbeets is a CPJ staff member based in New York.