Even in the glare of world attention, Ben Ali resorts to strong-arm tactics.
Tunis, Tunisia — Tunisia turned itself inside out to host the World Summit on the Information Society (WSIS), which drew some 15,000 representatives from governments, business, and civil society around the world. For President Zine El-Abidine Ben Ali, who has ruled the country single-handedly since 1987, it was a golden opportunity to burnish his international reputation. The mid-November conference was hailed by the government-controlled press and television. Pennants bearing the red Tunisian flag and Ben Ali’s face flapped on lines in front of hotels and shops.

But Ben Ali’s desire for good public relations failed to keep his primitive authoritarian instincts in check. Several ugly incidents resulted in bad press for Tunisia and belied the glowing descriptions of Tunisian democracy contained in the glossy publicity material handed out to conference participants. Tunisia, despite its poor human rights record, has until now escaped international criticism, particularly from the United States, which views the Ben Ali regime as a bulwark against Islamic militancy. 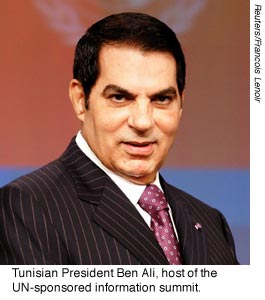 On Friday, November 11, French journalist Christophe Boltanski was sprayed with pepper gas, beaten, and stabbed in a heavily policed neighborhood in the center of Tunis, just one day after the French daily Libération published his article criticizing Tunisia’s human rights record. He was covering a hunger strike in an office in downtown Tunis, where eight prominent citizens had been fasting for a month to protest the lack of basic freedoms in Tunisia. One of the hunger strikers was a journalist. Lotfi Hajji is a founder of the now-banned Tunisian Journalists’ Syndicate and has been a frequent target of police harassment.

In another incident, Robert Ménard, the secretary general of Reporters Without Borders, a Paris-based human rights organization, was turned back at Tunis airport when he tried to enter the country, even though he had a visa and accreditation for the conference.

The following Monday, the “Citizen’s Summit,” an alternative forum made up of local and foreign human rights groups, attempted to meet at the Goethe Institute, the German cultural center in Tunis. Uniformed and plainclothes police arrived in force before the meeting and proceeded to threaten, shove, and manhandle journalists and others. They confiscated a videocassette from a Belgian photojournalist. 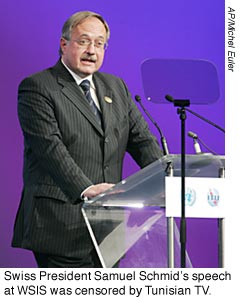 Among those threatened was a Swiss photojournalist. When Swiss authorities expressed concern about the incident to their Tunisian counterparts, their complaints were rejected. Two days later, at the opening ceremony of WSIS, Swiss president Samuel Schmid said, “It is, quite frankly, unacceptable for the United Nations to continue to include among its members states which imprison citizens for the sole reason that they have criticized their government on the Internet or in the press.” He was clearly referring to Tunisia, and Tunisian television reacted by cutting away to another speaker just before he uttered those words.

Even those who knew nothing about conditions in Tunisia must have noticed that security was excessive even by international post-9/11 standards. Surveillance began at the airport, where WSIS participants were directed to passport control line that moved more slowly than the regular line as border officials took more time examining documents. In front of every hotel, three or four police officers, mostly plainclothes, watched guests come and go. Shuttle buses took visitors to the conference site six miles (10 kilometers) out of town, and on the last stretch of road a soldier stood every 50 feet (15 meters) or so holding a rifle with a fixed bayonet.

Upon arriving at Kram expo center visitors plunged into the exhibition hall or the conference room area and may have noticed the many local men who scrutinized the crowd rather than the exhibits.

There seemed to be no place unwatched. Often, at the beginning of a panel discussion, several men would drift into the room like cigarette smoke, eyeball the audience, and then leave without showing any interest in the panel. If the topic touched on human rights or free expression in any way, several “spoilers” would rush forward and dominate the open discussion period with pointless, time-wasting verbiage–always the same few people. 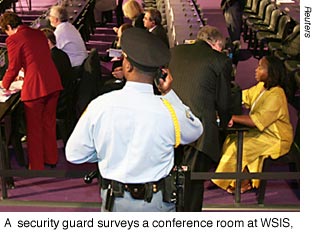 In the “cyber café” area, where computers with high-speed Internet connections were available, security men circulated in the crowd peering over shoulders to see what people were viewing online, behaving as if they had a perfect right to look at everyone’s e-mails.

Although officially denying any intention to meddle with the Internet, the government exercises censorship in practice. The OpenNet Initiative, a collaboration between several universities, found that 10 percent of the 2,000 Web sites it tested in the country were blocked. In addition to Web sites that have long been inaccessible, during the conference the government blocked the Tunisian League for Human Rights (www.ltdh.org), a Tunisian opposition party (www.cprtunisie.com), and most controversially, the Swiss news site www.swissinfo.org.

For anybody who believes in free expression, the question that loomed over the summit was, why did the United Nations choose Tunisia for such a gathering? According to Ronald Koven of the World Press Freedom Committee, Tunisia, backed by the Arab League, proposed the conference to the International Telecommunication Union, the U.N. body that sets telecommunications standards. Geneva, where the ITU is headquartered, then made its own offer to host the summit. Yoshiro Utsumi, the secretary general of the ITU, compromised by splitting the conference into two parts, naming Geneva the site of phase one of the conference, and Tunis the site of phase two. The U.N. General Assembly officially endorsed this odd and unprecedented arrangement.

Ordinary Tunisians are still living in the darkness of a regime that watches them, intimidates them, and denies them the right to free speech. Ironically, WSIS might well have made conditions worse for local journalists, at least temporarily, because it provoked more crackdowns by the government.

A local joke goes like this: A man encounters his friend one day on the street. The friend has a big bandage over his nose. The man asks what happened, and the friend says, “I had a tooth pulled.” Surprised, the man says, “Then why do you have a bandage over your nose?” The friend replies, “In this country, you have to keep your mouth shut.”

Mick Stern is Webmaster of the Committee to Protect Journalists. Additional reporting was provided by CPJ consultant Kamel Labidi.