But in Brussels in April 2004, the Eyadéma regime surprised the international community by pledging 22 democratization reforms in a bid to get EU economic sanctions lifted. The government promised this broad array of political, press, and electoral reforms in exchange for lucrative EU aid that, even in its initial phase, would be worth tens of millions of euros. 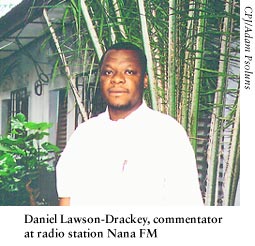 The European Commission (EC) launched a two-year evaluation period this summer while the government took steps to improve press freedom. In August, the Togolese Parliament unanimously passed amendments to its harsh Press Code, removing criminal penalties for some press offenses.

Togolese journalists say the Brussels commitments mark a tremendous opportunity, but many remain deeply skeptical given Eyadéma’s record. He broke his pledge not to run again for office last year, winning the June 2003 election amid fraud allegations. Also in 2003, CPJ named Togo one of the world’s 10 worst places to be a journalist.

Press advocates have urged the EC to stay in close contact with local journalists during the evaluation period, and to hold Togo’s leaders accountable. “It’s a question of lobbying, because the government is extremely sensitive,” says Daniel Lawson-Drackey, former secretary-general of the Independent Journalists Union of Togo. “For the government, the most important thing is to restart international cooperation. Now, the changes to the Press Code must be applied to the letter.”

Human rights organizations have cited Togo’s 2000 Press Code as one of the worst in Africa. It imposed prison sentences of up to five years for “insulting the head of state” and as much as three years for “defaming” the courts or the armed forces. In the past, officials used the code to harass and jail journalists, and to seize thousands of copies of private publications. In the run-up to the 2003 elections, the Eyadéma regime shuttered media outlets, blocked news Web sites, and jammed the frequency of Radio France Internationale. 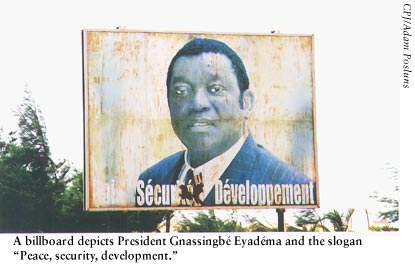 The reforms passed in August would impose stiff fines rather than imprisonment for publishing what is deemed false or defamatory–including defamation of public figures and institutions. The changes would also ban the Interior Ministry from seizing and closing newspapers without judicial oversight, although a judge could still order copies of a publication destroyed.

Unlike the adoption of the 2000 Press Code, cooperation between the government and the media has marked the new reforms. The amendments followed the recommendations of a commission of local journalists and media representatives established by the communications minister. Some local journalists say that coverage of political events improved after amendments were passed; Web sites that were regularly blocked inside Togo are now accessible.

Still, several press offenses would carry criminal penalties of up to one year in prison, including publishing news deemed to incite crime, theft, destruction of public or private property, or ethnic or racial hatred, and “crimes against the internal or external security of the state.” And beyond the letter of the law, press advocates say, the long-term prognosis depends heavily on the government’s behavior. Eyadéma’s record offers reason for doubt.

The early 1990s were promising times for Togolese journalists. After more than 20 years, the Eyadéma regime finally began licensing private media and allowing multiparty democracy. Within a few years, new political parties emerged, and dozens of new publications launched. Some were pro-RPT, but many more criticized the country’s leadership. 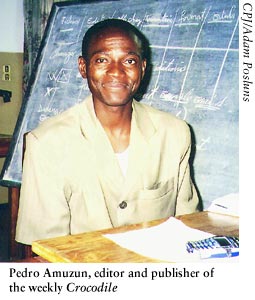 That did not sit well with a regime unaccustomed to opposition. “The government came to power without a [private] press,” says Pedro Amuzun, publisher of the private weekly Crocodile. “So when the press emerged, they felt threatened, and they systematically barred the way. These were people who really did not like criticism.”

Lawson-Drackey, who is also a journalist with the private radio station Nana FM, says the government did not understand the role of a free press. “They called our criticism ‘insults,'” he explains. “But they don’t understand that the role of the press is to criticize.” Soon enough, journalists faced reprisals: The RPT fought criticism with harassment, lawsuits, and attacks on newsrooms, while the government passed the punitive 2000 Press Code.

Matters worsened for the press during the 2002 parliamentary elections. Because Eyadéma and the RPT tightly control the state media, the political opposition had to rely on the private press as its primary outlet. Unwilling to brook often strident criticism in private newspapers, the government augmented the Press Code’s already harsh penalties in the run-up to the poll.

The government has long been acutely sensitive to newspaper coverage, even though Togo’s literacy rate is only 60 percent. Analysts point out that the Eyadéma regime is fiercely intent on projecting to the world a positive image, much of which emerges from newspapers.

“The international community suspended cooperation, and there is no money,” says Pierre Sabi, publisher of the private La Matinée and an RPT supporter. “So the government’s priority is to get this cooperation back. … That is why they are so concerned with what the newspapers say.” 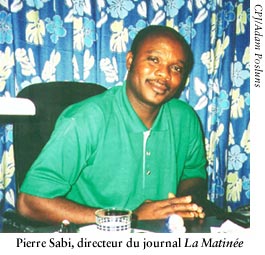 Until recently, that meant retaliation against reporters and editors who dared to tarnish the country’s international image. But the government seems to have shifted its strategy, loosening its hold on the domestic press to persuade EU leaders to loosen their purse strings. Whereas the RPT resorted to repressive tactics to curb negative press in the past, no journalist has been imprisoned and no newspapers seized in the last year.

“We don’t intend to imprison journalists,” Communications Minister Pitang Tchalla says. “The proof is that there are none in prison today. We wanted journalists to know that we had reached a redline, and I think that [the Press Code] had its intended effect.”

Five of the 22 pledges the government made in Brussels relate to improving freedom of expression and information, including making the Press Code consistent with international standards; ensuring the political independence of the country’s media regulatory agency, the HAAC; and guaranteeing all political parties equitable access to public media.

In August, the European Commission, which had sent a mission to Togo’s capital, Lomé, in June to evaluate the reforms, laid out a “road map” of steps the Togolese government needs to take, says Antonio Logreco, a member of the EC delegation. Scheduling multiparty elections by the end of 2004, for example, triggers 40 million euros (US$49 million) in EU aid for further democratic reforms. As much as 100 million euros (US$123 million) could be made available over five years if Togo fully meets EC criteria, he says.

Local journalists, while welcoming the changes, see many potential pitfalls. Provisions describing criminal press offenses remain vague and could be used to crack down on antigovernment opinions. And the fines assigned to the newly decriminalized offenses, which range up to 5 million CFA francs (about US$9,300), are exorbitant and could spell bankruptcy if applied to local publications. 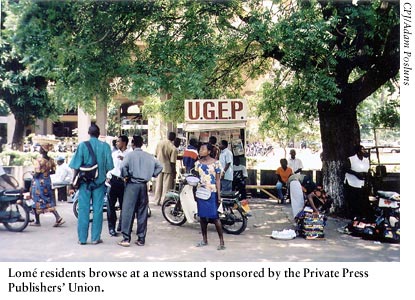 Press advocates also note that the government has long used a variety of “soft” tactics to control the media. Low salaries for journalists and low revenue from private advertising leave reporters and media owners vulnerable to bribes from government officials and politicians; chronic financial problems have also fostered what is known locally as the “combat press,” publications that are financed to attack political enemies. “Newspapers lack funds, and authorities buy off the press by giving them money,” Lawson-Drackey says. “Almost all of Lomé’s newspapers are vulnerable.”

Such problems, local journalists say, will be solved only when authorities reduce financial burdens on the press by lowering taxes on such items as paper and phone services; fostering a climate in which businesses are not afraid to advertise in critical newspapers; and providing support for journalist training.

Dress Code improvements will not guarantee greater liberty if authorities circumvent the code, as they have in the past. In 2003, officials imprisoned three journalists for a month for “attempting to publish false information” when the journalists were found with photos of alleged election disturbances. The Press Code does not contain that charge. One of the journalists was fined 500,000 CFA francs (US$865). Two were tortured, CPJ sources say.

And while the government has promised political parties equitable access to the state media–the only media with a nationwide reach–there is reason to be wary of this guarantee as well. Before the 2003 presidential elections, the RPT promised to open the state media to opposition parties. But the promises came with a hitch: The HAAC required all political messages to be vetted before being aired on the state broadcasters or appearing in Togo Presse, the state newspaper and Togo’s only daily. Opposition candidates complained that their messages were censored.

Local journalists say the international community will be instrumental in keeping the government on the path to reform. The EU, they argue, must communicate with independent journalists throughout the reform process.

“To legislate these reforms is not yet to practice them,” warns Franck Assah, a reporter for Crocodile and Togo correspondent for the Panafrican News Agency. “I’m an optimist, but I still have many doubts.”

John Zodzi, a Togolese journalist and local correspondent for Reuters, says that in the past “whenever a newspaper was seized, the international community didn’t intervene.” Now, he says, “the European Union is a guarantor–it’s up to the EU to intervene.”