After years of war and civil unrest, peace and elections have given Sierra leone’s journalists a new set of issues to face.

Freetown, Sierra Leone–On a blistering afternoon in May, just days before Sierra Leone’s first general elections since the end of its decade-long civil war, Freetown, the country’s wrecked capital of tin shanties and crumbling houses, is in the throes of political campaigning. Throngs of citizens, some sporting T-shirts adorned with party slogans, race up and down the crowded streets chanting their candidates’ virtues. Cars and buses honk in strident unison; music blares from all directions, and barefoot boys in threadbare clothes hawk piles of newspapers in heavy traffic. 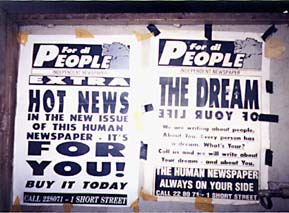 But on the fourth floor of a dank, dilapidated building downtown, Paul Kamara, the founding editor of For Di People, the leading independent daily in this impoverished West African nation, is preoccupied by a wholly different set of issues. “The printer is not working,” he sighs. “Yesterday it was the main computer and before that it was the printing press that did not work. But that we can live with,” Kamara quips. “The most difficult to put up with is political interference.”

In fact, the desire to thwart unwanted interference with the flow of information has led a surprising number of reporters here to seek political office. As a result, in the days prior to the May vote, casual debates on journalistic ethics fill the slow-news hours in the dimly lighted, sweltering rooms of unpainted brick walls and antiquated computers that serve as newsrooms here. Although most local reporters agree that government-media relations have improved since the end of the civil conflict, they know that myriad other problems linger–problems that hit at the very heart of the media’s identity. 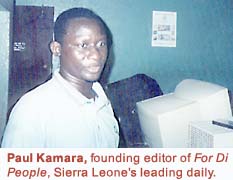 In all, 12 journalists ran for the 124 Parliament seats that were open during the May general elections. And former Voice of America (VOA) correspondent Raymond Bamidele Thompson unsuccessfully sought to unseat President Ahmed Tejah Kabbah. While many in the Freetown press corps see no conflicts of interest in their colleagues’ bids for office, veteran newsman Kamara cautions against compromising the already shaky credibility of the local media. “As journalists, we have more latitude to engage politicians,” he observes. “If we start doing the politicians’ job, who will be there to inform the people?”

Journalism, Kamara insists, should be a vocation, “a service to the people,” and not a jumping board into the political class. A former priest, Kamara says he decided to call his newspaper For Di People to stress that journalists in Africa’s emerging democracies have a duty to be “the voice of the powerless” and the vanguard in the fight against official misconduct. Rampant government corruption and disregard for basic rights are widely perceived to be among the root causes of Sierra Leone’s civil strife, which broke out in 1991 and claimed more than 50,000 lives. Therefore, essential human rights such as freedom of expression, Kamara argues, will remain but distant aspirations if members of the press give in to the dubious glamour of political power.

But Mohamed Koroma, a columnist for the private weekly African Champion who failed to secure a seat in Parliament, disagrees. He says that he chose to run because “having journalists in Parliament would be a better service to the struggle for freedom of expression than a thousand editorials deploring the lack of it.” Koroma is adamant in his belief that “a politician cannot be a good journalist but a good journalist has a great potential to become an excellent politician.”

Other reporters, who, like Koroma, aspire to become lawmakers, apparently share his confidence. Cherno Ojuku-Sessay, an editor at the independent weekly Pool who ran for Parliament, and lost, on the ticket of the small Peace and Liberation Party (PLP), recalled joining the electoral fray at the behest of his readers. “Our readers suggested I run because they believe that as a critic of the system, I have a better sense of what needs to be done,” he says.

This foray into politics is only one of the many examples that highlight the Sierra Leonian media’s search for a new purpose. Frank Kposowa, former president of the Sierra Leone Association of Journalists explains that since authorities loosened licensing restrictions in the early 1980s, he has witnessed what he calls an onslaught of “fly-by-night operations” run by people with uncertain journalistic credentials. This atmosphere has helped swell the number of newspapers to almost 50 in 2000–up from just a dozen three years earlier. This in a country whose illiteracy rate tops 70 percent. 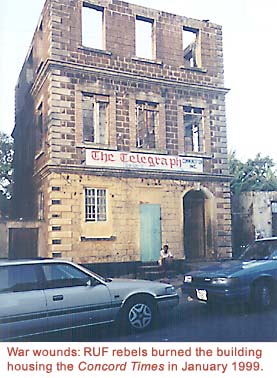 Of course, Sierra Leone has had bigger problems to deal with than the state of its media. The country’s civil war, which pitted the government of President Kabbah against the rebel Revolutionary United Front (RUF), headed by Foday Sankoh, ravaged the country. In January 1999, the RUF invaded Freetown, a frenzy of slaughter that lasted three weeks and was chillingly dubbed “Operation Kill Every Living Thing.”

Hannah Fullah, a 29-year-old broadcaster at the pro-government 98.1 FM radio station, recalls those harrowing weeks with a resigned smile. “I spent most of that time at the station, burning over 14 hours daily on the air, encouraging government troops and advising civilians on the rebels’ movements,” she says. “The station had become an active fighter, staunchly against the RUF rebels who let it be known that they would kill me if they found me.”

A ragtag alliance of West African peacekeepers, loyalist troops, and traditional hunters finally pushed the invaders into retreat, but not until thousands of Freetown residents had been murdered–including eight local journalists.

Both Kabbah’s government and the RUF targeted journalists. In all, 15 reporters were killed during the 10-year war, including three foreign correspondents. The RUF alone is responsible for 13 of those deaths, according to CPJ data.

Today, despite frequent United Nations warnings that a new round of bloodletting remains possible, life in Sierra Leone is slowly inching back to normalcy. The RUF has conceded defeat and has disclosed its weapon caches to international peacekeepers. Rebel leader Sankoh, in government custody since May 2000, is now facing trial for his staggering record of human rights abuses. What’s more, a truth commission and a special court will soon help close the wounds of the war. Economic recovery is lagging, but Western powers have vowed to assist in rebuilding basic infrastructure and to infuse cash into the mineral-rich country.

Although the government may be staying out of the media’s way more often these days, the African Champion‘s Koroma argues that greed, selfishness, and a poor sense of the media’s role in a democracy count among the most pressing issues he and his colleagues face. “The government leaves us alone these days. But nothing seems to have changed at all. Sleazy reports on the lives of politicians continue to fill the papers. We [journalists] are not talking on behalf of the people, we are still oblivious of their views.”

Other members of the Freetown press corps cite their own vulnerability to bribe taking and influence peddling as major hurdles to achieving real independence from the various groups competing for power in the tiny West African nation. The Pool‘s Ojuku-Sessay, for one, is emphatic that political bias in the press endures and is becoming more blatant. “Many so-called independent newspapers are actually funded by political groups,” he charges. “Corruption among journalists is endemic.”

Ojuku-Sessay adds that the perception that local journalists are corrupt, a view justified by barefaced editorial bias in some papers and backstabbing among colleagues, is the reason he decided to resign from his job for six months to seek a parliamentary seat. As part of his campaign, he called for increased press freedom and freedom of expression. According to Ojuku-Sessay, that only one of the dozen reporters vying for Parliament–Standard Times writer Mohamed Kandeh Kakay–ultimately succeeded reveals just how suspicious Sierra Leoneans are of the media.

Most agree, however, that the media covered the May elections well. Equal access to public media, often a bone of contention in African elections, caused little antagonism between the various political parties. In fact, in Freetown newsrooms, the view is widespread that the state broadcaster, Sierra Leone Broadcasting Service (SLBS), did its best job to date. 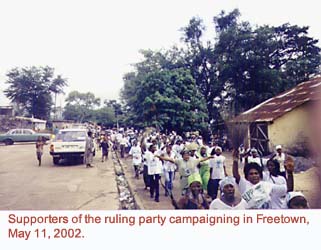 All 10 presidential candidates were granted equal access to the airwaves “for the first time in the history of this country,” says Ahmed Tejanie, a sound engineer at SLBS. And reporters covering presidential hopefuls on the campaign trail were rotated from party to party on a weekly basis to avoid close relationships with the candidates.

Andrew Koroma, who created Sierra Leone’s first independent radio station, also rejoices at the fact that, with the May general elections, “history has been written” for local media. Koroma, who occasionally strings for VOA, says that without a strong media promoting fair coverage of the candidates, party activists could have turned to fists and stones to decide the elections.

For now, that’s progress. “Journalism in this part of the world is not easy,” says For Di People‘s Paul Kamara, who, having survived several assassination attempts during the 1990s, knows of what he speaks. “Once you choose to [pursue journalism], you have to brace yourself for all sorts of obstacles.”

Fortunately for Kamara, at this moment, his only obstacle is a busted printer.

Yves Sorokobi is the coordinator of the Africa program for CPJ.