Even with Milosevic in jail, Serbia and Bosnia remain dangerous for the independent press.

It still is: Even as Milosevic faces war crimes charges in the International Tribunal for War Crimes in The Hague, the police investigation into the April 1998 assassination of prominent newspaper publisher Slavko Curuvija in Belgrade has gone nowhere, despite documentary evidence implicating Milosevic’s intelligence services in the attack.

Milosevic’s downfall was also expected to weaken hard-line nationalists in neighboring Bosnia and Herzegovina, where Serbia continues to exert great influence over political life. Yet Bosnian journalists who write about war crimes and other sensitive issues have faced death threats and worse. In Republika Srpska, the Serb-dominated portion of Bosnia, the September 1999 car bombing of crusading editor Zelko Kopanja remains unsolved despite indications that the attack may have been directed from Belgrade.

Serbian president Vojislav Kostunica promised to democratize Serbia and establish the rule of law after he succeeded Milosevic in the fall of 2000. Two years later, the dominant republic in the Yugoslav Federation is indeed more democratic. But many Serbian journalists say they will not feel secure until the cycle of impunity is broken.Politics and the press

With significant financial backing from Western governments and nongovernmental organizations, the independent Yugoslav press helped cement an anti-Milosevic consensus, paving the way for the Kostunica-led Democratic Opposition of Serbia (DOS) coalition. But any gratitude that DOS officials may have felt faded rapidly after local journalists started covering rivalries and scandals within the new ruling coalition.

The DOS government was initially hailed for its support of press freedom and other democratic reforms. Since then, the coalition has divided into two factions. One faction supports President Kostunica, a conservative nationalist who is deeply suspicious of the NATO alliance that helped defeat Milosevic. In fact, Kostunica has retained several key military and security officials from the Milosevic-era government.

The other faction backs Serbian prime minister Zoran Djindic, who wants Yugoslavia to join the European Union and has emerged as a strong voice for domestic political reform. Kostunica’s supporters often obstruct democratic reforms initiated by the Djindic faction, limiting the government’s ability to prevent or punish violent attacks against the media.

The intense rivalry between Djindic and Kostunica has inhibited reforms that would increase accountability and transparency in the Serbian state security apparatus. Although Djindic hired reformists to run other Serbian ministries, he appointed two senior Milosevic-era police officials to command the civilian police and the notorious State Security Service (RDB). Despite their dubious pasts, both men were apparently appointed because of their personal loyalty to Djindic.

Djindic has been extremely sensitive about reporting that links police officials to war crimes. In November 2001, for example, he accused the Belgrade weekly Reporter of seeking to “upset the police and turn them against the government” after it published a list of Interior Ministry officials whom the United Nations was investigating for alleged complicity in war crimes in Kosovo.

Djindic and other DOS leaders have come to view the independent media as a threat to the strength and stability of their fragile coalition government. Against this background of infighting and political instability, local journalists are often targeted for their work.

In April 2001, for example, Belgrade’s most progressive radio station, B-92, aired a program about the 1995 massacre in Srebrenica, where Bosnian-Serb forces executed some 7,000 Muslim men and boys. Although B-92 received numerous telephone threats in response to the show, the DOS government failed to denounce the threats or express any public support for the station.

Serbian journalists who cover organized crime live in fear of retribution from local gangsters, many of them well connected with Milosevic-era politicians and security officials whom Kostunica has retained in his government. On the morning of June 11, 2001, Milan Pantic, a reporter for the Belgrade daily Vecernje Novosti, was killed by two assailants who grabbed him from behind as he entered his apartment building. They broke his neck and then struck him several times on the head with a sharp object as he lay face down on the ground.

Pantic reported extensively on criminal affairs in central Serbia, including corruption in local companies. His wife, Zivka Pantic, told Vecernje Novosti that he had received numerous telephone threats in response to his work. Authorities have made little progress investigating the murder.Death of an insider 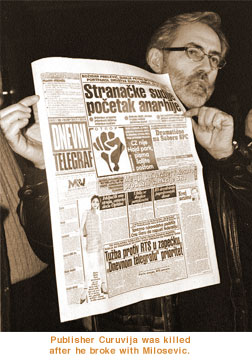 Unlike Pantic, Slavko Curuvija was a consummate insider with close, personal connections at the highest levels of the Milosevic regime. At times, the prominent newspaper editor even bragged about his close friendship with Milosevic’s influential wife, Mirjana Markovic, whom many considered the power behind the throne.

In the spring of 1998, after Serbian security forces launched a brutal crackdown against ethnic Albanians in Kosovo, Curuvija split with Serbia’s ruling couple. In particular, Curuvija’s publications blamed Milosevic’s disastrous economic policies for the impoverishment of a country that had once boasted Eastern Europe’s highest standard of living.

On April 11, Curuvija was murdered as he and his wife, Branka Prpa, were returning to their home in central Belgrade after a walk. Two men wearing dark clothing and black face masks approached the couple, pistol-whipped Prpa, and shot Curuvija 11 times.

While the government media tried to blame the editor’s death on a business dispute, Belgrade’s close-knit community of independent journalists and opposition activists were convinced from the beginning that Curuvija’s killing was payback, Milosevic-style. The politics of murder

The first major break in the Curuvija case came in late October 2000, as DOS leaders squabbled over the fate of Rade Markovic, a deeply unpopular Milosevic loyalist who then headed the RDB. President Kostunica wanted to retain Markovic as RDB chief. Kostunica’s chief rival, Djindjic, was running for prime minister at the time and wanted to place one of his own supporters at the RDB.

During this debate, an RDB surveillance report that chronicled Curuvija’s movements on the day of his assassination was leaked to the press, seemingly with a view to discrediting Markovic and ensuring his termination. According to the report, RDB agents followed Curuvija all day on April 11 but were ordered to withdraw from their positions just 20 minutes before the journalist was shot dead.

Markovic finally resigned in January 2001, before the newly elected Djindjic could dismiss him. On April 5, 2001, Interior Minister Dusan Mihajlovic announced that between October 2000 and January 2001, exactly the period during which Kostunica had kept Markovic from being fired, Markovic had ordered the destruction of all RDB case files from the previous two years.

In February 2001, Markovic was arrested and charged with leaking “top secret” information. In July, he received a 12-month prison sentence. Meanwhile, the interior minister announced that Markovic was also under investigation to determine whether he was involved in the Curuvija assassination. And on August 24, the Interior Ministry offered a US$140,000 reward for information leading to the arrest of individuals responsible for 21 political assassinations–including that of Slavko Curuvija.

Interior Ministry investigators finally released a composite sketch of Curuvija’s assassin in November 2001, thirty-one months after his murder. Otherwise, Serbian authorities have made no apparent progress in bringing the killers to justice. In January 2002, frustrated by the slow pace of the investigation, the Curuvija family filed a murder case against Rade Markovic, his former deputy Milan Radonjic, and Mirjana Markovic. Blood in Banja Luka 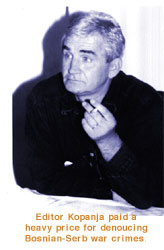 In the ethnically divided state of Bosnia-Herzegovina, journalists rarely criticize the misdeeds of their own ethnic group. Bosnian-Serb editor Zeljko Kopanja paid a high price for breaking this unwritten rule.

Kopanja is the co-founder and editor of Nezavisne Novine, the largest independent Serb daily in Bosnia-Herzegovina. In 1999, Nezavisne Novine ran a series of articles documenting Bosnian-Serb war crimes against Muslims during the 1992-1995 civil war. Never before had a Bosnian-Serb newspaper acknowledged the role of Bosnian-Serb authorities in atrocities perpetrated against other communities.

On October 22, 1999, Kopanja lost both his legs to a car bomb. Undaunted, he returned to work after learning how to walk on prosthetic legs.

While no hard evidence links the Milosevic government to the attack, Kopanja holds Milosevic responsible for the bombing, arguing that Nezavisne Novine‘s revelations helped expose Milosevic and his local allies in Republika Srpska to prosecution for war crimes. Among other activities, Nezavisne Novineçdocumented the participation of Serbian military forces in ethnic cleansing operations in Bosnia, contradicting Milosevic’s frequent claim that his government had no involvement in the Bosnian conflict during the 1992-1995 war.

In January 2001, Radio Television Serbia interviewed former RDB official Bozidar Spahic about the Kopanja case. Without providing any evidence, Spahic claimed that RDB agents and their Bosnian-Serb counterparts were behind the assassination attempt.

In May 2002, Kopanja told CPJ that he has not heard from the local police in months and does not expect to hear from them any time soon, given the close connections between Belgrade, local war criminals, and the security services in Republika Srpska. “It makes me angry and sad,” he said, “because this all shows what kind of state I live in, where the political and legal security is nil.”

In the summer of 2001, two journalists from the independent television station Alternativna Televizija received anonymous death threats, as did the editor of the progressive Banja Luka youth magazine Buka. All three journalists were apparently targeted because of their public support for Milosevic’s extradition to The Hague. The letters were signed “Avengers of the 5th of October,” referring to the date in 2000 when DOS supporters had ousted Milosevic.

On November 21, 2000, CPJ honored Kopanja with an International Press Freedom Award at its annual awards ceremony in New York City. But after the attack, Kopanja’s sources were afraid to speak out, and the subject of war crimes became, once again, a media taboo.