But ever since U.S. secretary of state Colin Powell urged Qatar’s emir Sheikh Hamad bin Khalifa al-Thani in early October to rein in what the U.S. administration sees as Al-Jazeera’s anti-American bias and inflammatory coverage of the aftermath of the September 11 terrorist attacks, the press has adopted a more critical eye. As the United States wages a “war on terror,” Al-Jazeera remains the sole foreign broadcaster in Taliban-controlled Afghanistan (and Osama bin Laden’s preferred news outlet for transmitting messages). The channel’s provocative coverage, which reaches an estimated 35 million viewers, has set off alarm bells in Washington.

Journalists and commentators are now asking whether the station is a balanced news source or a biased outlet for inciting the Arab world against the United States; whether it is an independent news gatherer or a tool in the hands of Bin Laden and his propaganda machine.

To Al-Jazeera’s defenders, the station is a reliable, professional, and informative news channel that reflects the perspective of its audience but also tries to present all sides of the story. In a region where the U.S. media are viewed as fundamentally partisan and biased in their own right, the Bush administration’s efforts to stifle the channel appear as a hypocritical attempt to smother unwelcome news coverage.

A popular channel
There is little question that Al-Jazeera has revolutionized Arabic-language television news in a region that for decades has been accustomed to the stale, heavily censored offerings of state-controlled television. Founded in 1996 with a start-up grant of US$140 million from the Qatari government, Al-Jazeera has quickly become the most watched–and most controversial–news channel in the region, winning over viewers with its bold, uncensored news coverage, its unbridled political debates, and its call-in-show formats that tackle a range of sensitive social, political, and cultural issues.

Governments from Algeria to Yemen have lodged complaints against the station at one time or another. Some, like Tunisia and Libya, have temporarily withdrawn their ambassadors from Qatar’s capital, Doha, to protest the appearance of political dissidents on talk shows or slights made against their leaders.

A few years ago, Algeria reportedly cut power in part of Algiers to prevent residents from watching a show about the country’s brutal civil war. Kuwait temporarily banned the channel’s reporters from the country after a caller phoned in and criticized the Emir Sheikh Jaber al-Ahmed al-Sabah live on the air. Recently, Yasser Arafat’s Palestinian Authority temporarily closed Al-Jazeera’s Ramallah bureau because of a promotional trailer for a documentary series about the Lebanese civil war that contained an unflattering image of the Palestinian leader.

Pressure from the U.S. 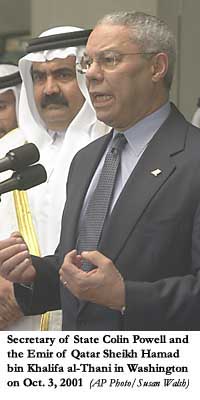 On October 3, at a press conference in Washington, D.C., Qatari ruler Sheikh Hamad bin Khalifa al-Thani acknowledged that U.S. officials had asked him to use his influence to rein in Al-Jazeera’s news coverage. [Read CPJ’s alert] “We heard from the U.S. administration, and also from the previous administration,” the emir, referring to both the Bush and Clinton administrations, was quoted as saying. “Naturally we take these things as a kind of advice.” Earlier, the U.S. Embassy in Qatar had filed a formal diplomatic complaint with Qatari authorities regarding Al-Jazeera’s coverage. Bush administration officials made it clear afterward that they were upset by what they viewed as Al-Jazeera’s unbalanced and anti-American coverage. Officials said they feared that Al-Jazeera’s replays of its exclusive 1998 interview with Osama bin Laden were stirring up fundamentalist feelings in the region.

U.S. officials were also bothered by airtime given to analysts who expressed anti-American views or attacked U.S. policies in the Middle East. Specifically, the U.S. government was angered when Al-Jazeera broadcast an unconfirmed report that Taliban forces had captured U.S. Special Forces troops inside Afghanistan. Later, U.S. government officials expressed concern that taped messages from Osama bin Laden and his terrorist network, Al-Qaeda, originally aired on Al-Jazeera and rebroadcast by U.S. networks could contain secret codes instructing operatives in the United States to carry out further attacks.

After Secretary Powell’s meeting with Emir Hamad, a State Department official told CNN that Powell and the emir “had a frank exchange” on the issue and “there should have been no mistake of where we are coming from.”

Said U.S. State Department spokesman Richard Boucher during a daily briefing a few days later: “We would certainly like to see them tone down the rhetoric.”

A biased, anti-American channel?
During the administration’s offensive against Al-Jazeera, U.S. media have put the channel under the microscope. Although the Qatari government subsidizes Al-Jazeera, the station has been generally well regarded for its editorial independence. Nevertheless, it has been taken to task for usually avoiding tough scrutiny of Qatari affairs and any strong criticism of the ruling al-Thani family. Arab critics have accused the channel’s free-for-all debate shows of being sensational and at times unprofessional.

Deeper questions have been asked about Al-Jazeera’s alleged anti-American editorial bias, the supposed pro-Taliban leanings of its Kabul correspondent Tayseer Allouni, and its apparent failure to air footage that shows the Taliban in a negative light. Critics have accused the channel of acting as a mouthpiece for Osama bin Laden by broadcasting his taped messages. Western media have even questioned whether Allouni had held on to Bin Laden’s first videotaped message after the September 11 attacks until after U.S. bombing of Afghanistan began–something Al-Jazeera and Allouni have denied.

A New York Times editorial recently criticized Al-Jazeera for reporting that Jews had been informed in advance of September 11 not to go to work at the World Trade Center. (An official at the station told CPJ that a talk show host cited the charge, which had previously appeared in a Jordanian newspaper, and asked his guests what they thought about the report.) More recently, the channel has been criticized for using the term “martyr” in newscasts to describe Palestinian suicide bombers who have killed Israeli civilians. But Al-Jazeera contends that they use the term for all Palestinians who die fighting a “cause,” not just suicide bombers.

With tensions already high in the Middle East and anti-American sentiment growing, some say such programming only worsens the atmosphere. “This isn’t playing with fire, this is using a flamethrower in terms of the potential impact on the governments in the Islamic world,” James Morris of the Institute of Arab and Islamic Studies at the University of Exeter in Britain was quoted as saying recently in the Christian Science Monitor. “This is Osama bin Laden’s loudspeaker.”

The criticism has angered Al-Jazeera staff, who have roundly rejected most of the accusations and maintain that their reporting is objective and includes all points of view. “Osama Bin Laden, like it or not, is a party to this present crisis,” news editor Ahmed Sheikh told the BBC. “If we said that we were not going to allow him the air time, then we would have lost our integrity and objectivity and our coverage of the story would have become unbalanced.”

While analysts who have appeared on its talk shows or news programs have harshly criticized U.S. policy, Al-Jazeera maintains that other opinions have been presented and that the views of U.S. officials, as well as State Department briefings, have been duly aired since September 11. According to the channel, some Arab viewers even accuse it of promoting U.S. propaganda when it airs U.S. officials or statements.

Nevertheless, some at Al-Jazeera are self-critical. “I think since September 11…or even before–that some people would put [on the air] what could be called inflammatory rhetoric or people with outrageous views,” a source at Al-Jazeera told CPJ. “After the crisis and the complaints I think [the coverage] has toned down….The message was heard and Al-Jazeera adjusted.” But the same source argued that any bias at Al-Jazeera did not stem from ill intent but simply reflected the reporters’ backgrounds and points of view.

A new war, an old double standard
Journalists and others in the Arab world see the United States, which touts itself as a symbol of freedom and democracy, as hypocritical for pressuring Al-Jazeera to modify its coverage. “The work of Al-Jazeera has been professional and balanced,” says Daoud Kuttab, director of the Institute of Modern Media at Al-Quds University in the West Bank and an observer of Arab regional media. “As to the Americans, they are completely wrong and apply a double standard. I can see why they are angry but it is not because Al-Jazeera is not fair. On the contrary, I think they wish for Al-Jazeera to be biased to the U.S.”

Moreover, many viewers from the region view Western media coverage as extremely partisan, especially where the Middle East is concerned. “The lies, falsehood, and enmity with respect to Arabs and Muslims in the U.S. media, particularly CNN, play an extremely bad role in kindling feelings of revenge,” a columnist at Jordan’s semi-official daily Al-Dustur argued recently.

“What about the U.S. right-wing press that’s been [bashing] Arabs?” asks former CNN correspondent Peter Arnett, who himself was a target of U.S. criticism for his coverage from Baghdad during the Gulf War. “Do they rein them in? Do they rein in Fox TV? Are we going to order our own media to rein in its coverage? It’s getting out of hand.”

Aside from the press freedom implications, U.S. calls for Qatar to censor Al-Jazeera may have backfired by sparking criticism from the Arab world at a time when the United States needs the support of people in the region. “I think this elevates Al-Jazeera into an even more powerful organization than it is,” says Arnett. “Simply it’s a news source that’s threatening the U.S….They don’t have any guns. They haven’t been traced to Bin Laden.”

Getting the point across
Critics of the administration’s policy have advised the United States to respond to Al-Jazeera in the same way it would respond to critics at home–by getting out its own message instead of trying to censor the channel. In fact, Al-Jazeera has complained that U.S. officials have been unavailable to present their side of the story to viewers. Hafez al-Mirazi, Al-Jazeera’s Washington bureau chief, points out that while he secured an interview with Colin Powell shortly after the September 11 attacks, U.S. officials did not show a keen interest afterward in making further appearances.

But the administration appears to have grasped the channel’s importance as a medium to reach millions in the Arab world. The State Department has now assigned at least one official per day to speak with the channel, according to al-Mirazi. He has already interviewed Assistant Secretary of State for the Near East William Burns, National Security Adviser Condoleezza Rice, and Defense Secretary Donald Rumsfeld. President Bush is said to be considering an appearance of his own. In addition, U.S. government is considering taking out paid advertisements on the channel.

By putting administration officials on the air, the United States hopes to exploit Al-Jazeera’s reach in the Arab world and make its case to the public in a region where anti-American sentiment runs strong. As Al-Jazeera continues to cover the war in Afghanistan–and its effects on civilians–such a policy may become more essential.

Meanwhile, Al-Jazeera staff stand behind their coverage. An anchor at Al-Jazeera argued that his channel is not biased. “Every press conference of every U.S. leader or the Pentagon or the State Department is aired directly live on the channel,” he said. “We try to have lots of viewpoints.”