Why does the president of Kenya want to ban private vernacular broadcasting?
New York, September 8, 2000 — On August 31, President Daniel arap Moi of Kenya ordered his attorney general to craft legislation that would ban private radio stations from broadcasting in Kenya’s indigenous languages, on the grounds that such broadcasting fostered “tribalism and disunity.” In essence, the leader of a post-colonial African state was ordering private broadcasters to communicate only in English and Kiswahili, the two “national” languages.

But President Moi does not object to vernacular broadcasting as such. In the same statement, he claimed that the vernacular broadcasts of the state-owned Kenya Broadcasting Corporation (KBC) actually “ensure that national unity is not undermined.” It is obvious, in short, that the real issues here are ownership and content, not language.

This move signals the autocratic Moi’s determination to maintain his government’s rigid control over the airwaves. And given that the proposed legislation is almost certainly aimed at a station that broadcasts in the language of the Kikuyu people, steadfast Moi opponents, it also highlights the country’s complex ethnic politics.

Politics aside, what is the point of vernacular broadcasting? Kenya has over 40 ethnic groups, each of which speaks a more or less distinct language or dialect. Most of these languages are mutually unintelligible. While this might seem like a compelling reason to broadcast in languages that the entire country can understand, the issue is more complicated.

Most Kenyans study English and Kiswahili in schools, but few ever attain more than a rudimentary knowledge of the languages. By the most generous estimates, only 69 percent of the population is literate, meaning they have mastered the basics of reading and writing in at least one language (only about 40 percent of women can read and write in any language).

Kenya’s population is not only divided by language and literacy. In 1993, the country was rocked by bloody land clashes that pitted several ethnic groups against each other. Thousands of Kikuyu, Luo, Luhyia, and Kisii farmers were branded as “foreigners” and expelled from the Rift Valley Province, Kenya’s breadbasket. For months before the clashes, several members of Moi’s cabinet had publicly called on members of traditionally pastoralist groups–including Moi’s Kalenjin community–to expel those groups from the province. 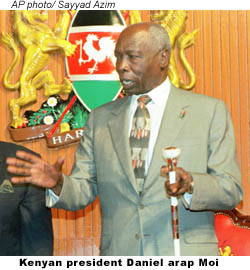 The Kikuyu–the largest ethnic group in the country, and one of the hardest hit in the 1993 clashes–have long viewed Moi as their nemesis, a feeling that is thought to be mutual. Economically powerful and overwhelmingly pro-opposition, they have lived in fear of state reprisals because of their consistent refusal to vote for the ruling KANU party in local and national elections. Many Kikuyu see this latest presidential directive as further evidence of an organized government campaign against the community.

Three stations would be affected by the proposed legislation–among them Sauti ya Rehema Radio, which broadcasts in Kalenjin, and East FM, which broadcasts in English and a variety of Indian languages. But most Kenyans seem to believe that the directive is aimed at the largest and most popular station, Kameme 101.1 FM, which is based in Nairobi and broadcasts exclusively in the Kikuyu language.

The private stations mostly broadcast entertainment, along with oblique social commentary on issues such as the country’s frequent brownouts. These shows are mild by the standards of Howard Stern or The Simpsons, not to mention Kenya’s frequently outspoken English-language press. More troubling to the president, it would seem, is that the Kikuyu community now controls its own mass medium.

Because the government still limits their range, the private stations have not challenged the KBC’s national coverage. However, they have managed to siphon off some of the KBC’s advertising revenues by offering alternatives to the officially sanctioned content of the state media.

With rampant unemployment and rising inflation in Kenya, few literate people can afford to purchase newspapers and magazines on a regular basis. But as President Moi and his cabinet are well aware, most Kenyans do listen to the radio.

The ruling KANU party has a huge rural following in this predominantly agricultural country, so the government naturally has a vested interest in vetting and controlling the type of information that rural residents receive. Since independence in 1963, KANU’s attempts to control what Kenyans read, write, hear, say, and even think have taken many forms, including a bizarre 1967 law that makes it treasonous to “imagine the death of the President.”

But since the advent of multi-party politics in the early 1990s, several oppressive, KANU-sponsored laws have been challenged successfully in Parliament and the courts. Further evidence of an emboldened citizenry is that local journalists attacked Moi’s recent directive in a series of pointed editorials, while ordinary citizens (from many ethnic groups, by all accounts) flooded newsrooms and English radio chat shows in Nairobi with irate phone calls. And six days after the president’s statement, Kameme and East FM are still broadcasting in vernacular languages.

Unfortunately, Moi’s directive against a Kikuyu-operated, Kikuyu-language radio station can only heighten existing tensions between the Kikuyu and the Kenyan state. It also shows that the president is determined to keep mass communications under strict government control. Will he succeed? Stay tuned.

Wacukai Mungai is an Africa program researcher at CPJ.