On February 3, Senegalese authorities indicted former Chadian leader Hissene Habré for torture and other crimes perpetrated by his government in Chad between 1982 and 1990. That same day, the “African Pinochet” was placed under house arrest in the upscale Dakar neighborhood where he has lived for the past decade. It was the first time in African history that African victims had asked a court in another African country to prosecute an African head of state.

Senegal was not a random choice: unlike Chad and many other African countries, it has a strongly independent judiciary and a lively, critical press. (Click here to read more about journalism in Senegal.) Because of Senegal’s liberal political environment, many of Habré’s Chadian victims found refuge there, as did Habré himself after his ouster in 1990.

One of the Chadian plaintiffs, a teacher named Samuel Totodet, told reporters that Habré’s secret police had forced him to “bury other political prisoners alive.” Another victim, Samuel Togoto, testified that his hands and legs were bound behind his back for so long that he became temporarily paralyzed. 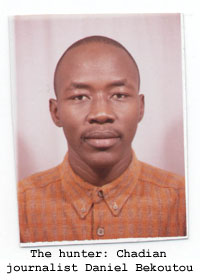 The complaint against Habré detailed 97 political killings, 142 cases of torture, and 100 “disappearances.” It was filed by nine Chadians and a coalition of African and international human-rights groups, led by Human Rights Watch. Many of the cases were researched by Chadian-born journalist Daniel Bekoutou, a reporter with the Dakar daily Walfadjri who also worked for one of the Senegalese organizations that prepared the case against Habré.

A day after Habré’s indictment, Bekoutou began receiving death threats. “You must assume the consequences of your involvement in the Habré case,” read the first sentence of an anonymous letter he received at home. Fearing for his life, Bekoutou fled to Paris, where he plans to stay until tensions have cooled down in Dakar.

This is his story.

Paris, April 11, 2000 — On February 3, Senegalese authorities used evidence I had gathered to indict former Chadian dictator Hissene Habré for torture and other crimes committed by government agents in Chad under his rule. As a result, I became a target for Habré’s hired goons. Anonymous death threats were phoned in to my home and to the editorial offices of Walfadjri, the Dakar newspaper where I worked. I was told to assume that I would be held responsible for anything that happened to Habré.

Coming from people with itchy trigger fingers who were implicated in the deaths of around 40,000 Chadians during Habré’s eight-year rule, these threats could not be dismissed as idle. You have to realize that reporting in Africa is like walking through a minefield at midnight. An Italian colleague of mine coined this phrase, and believe me, it’s not an exaggeration. Every day, African journalists face intimidation, destruction of their equipment, arbitrary arrest, and death threats. Dictatorial regimes deploy an entire arsenal of terror to stifle the independent press, whose work often gives rulers a bad conscience.

In my own country, Chad, professional journalism can cost you your life. On January 1, 1992, a reporter named Maxime Kladoumbaye, who worked for the daily N’djaaména-Hebdo, was gunned down by police. On November 28, 1992, state television anchor Djérabé Déclaud, who was known to be an opponent of the regime despite his government job, suffered the same tragic fate. Déclaud took two bullets in the back as he was leaving the television studios after presenting the last edition of the evening news.

Other Chadian journalists have been poisoned to death, such as Néhémie Bénoudjita, the brilliant editorial director of the newspaper Le Temps, or unjustly jailed, as in the cases of Coumbo Singa Gali, editorial director of l’Observateur, and one of her colleagues who had published a controversial article about the poisoning of Bénoudjita.

But despite the diversity of fates suffered by individuals, the elimination of yet another Chadian journalist has become a banal event that usually goes unpunished. So in November, 1994, after I finished my studies in journalism, I decided to move from Chad to Dakar, Senegal.

As a reporter with the Dakar daily Walfadjri, I mainly covered human rights, health, and the environment. But even though Senegal is 8000 km from Chad, I remained a Chadian journalist, which meant that my security was precarious. This year, the Hissene Habré affair erupted. On January 26, nine Chadians and a coalition of local and international human-rights organizations filed a complaint against Habre in a Senegalese court for crimes committed in Chad. On February 3, the court took the unprecedented step of indicting the former Chadian president, who had been living in exile in Dakar for a decade, on charges of torture, illegal detentions, and other human-rights violations committed by his government.

In view of the hostilities that my reporting had provoked, and especially because of persistent physical threats against me, two international human-rights organizations then organized my discreet evacution from Dakar to Paris.

And what was my alleged “crime”? Maybe it was an article that I published in the January 26, 2000, edition of Walfadjri, containing inconvenient revelations about the disappearance of two Senegalese citizens in Habré’s prisons. The Senegalese authorities had apparently never been informed of this event, and Habré and his cohorts objected to a Chadian journalist writing about it in the Senegalese press, lest he damage their relations with a generous government that had granted them political asylum. That would explain why they saw me not as a journalist but as a traitorous Chadian who had intentionally set out to damage their reputations at a time when their legal position was already precarious.

In fact, there was no question of me betraying anybody, or even of settling some sort of “score.” It is an established and well-documented fact that Senegalese, Nigerians, Cameroonians, French citizens, and other foreign nationals, along with thousands of Chadians, died under this tyrannical regime. It was my duty as a journalist to write about these things.

But that article was not the only thing that got me in trouble with Habré and his stooges. As a press attaché for several local human-rights organizations, I provided the Senegalese authorities with information about the Habré government’s crimes. I also found several of Habré’s victims living in Dakar, and convinced them to testify against the former president. Naturally, I carried out this work with the utmost discretion, so as not to tip off the “African Pinochet.” Otherwise, he might well have fled.

On Monday, January 24, the day before formal charges were to be filed against Habré, I suddenly faced the challenge of convincing local and international journalists, who all sensed a major scoop, to defer the publication of their articles until Wednesday, January 26, the day after the indictment. It worked like a charm: the entire press corps embargoed the story for 48 hours. On January 26, twenty-four hours after the complaint was filed, the local and international press fired a coordinated broadside against Habré.

It was a rude awakening for the ex-president and his colleagues, who must have felt the ground slip away from beneath their feet. One week later, on February 3, the Senegalese government deployed police around Habré’s residence in Dakar.


DAKAR, Senegal (AP) — Armed with notebooks and cell phones, they roamed dusty ghettos and villages while Senegalese voted, on the lookout for election violence and fraud. And when they saw it, they spoke out. In the process, a new breed of young journalists may have played a key role in ensuring the democratic transfer of power in Senegal.

Abdoulaye Wade’s surprise victory in the March 19 runoff election ends a 40-year stranglehold on power by President Abdou Diouf’s Socialist Party and marks a rare transition from one elected leader to another in Africa, where governments often ensure re-election through fraud or intimidation.

The reasons for Diouf’s defeat are many. But some say an important factor was Senegal’s small but aggressive independent media, which after decades of being dominated by the state has arguably become the most vibrant in Africa.

Ebrima Sall, a sociologist with the Dakar-based Council for Development of Social Science Research in Africa, calls Senegal’s media a catalyst for change. “In a short time, the media has developed a very high quality service here,” Sall said. “It is very dynamic and there is a significant degree of maturity.”

Underpaid and inexperienced, but equipped with university degrees and computers, the journalists mix advocacy with traditional reporting in a quest for reforms that has earned them the popular nickname “sentinels” — as in “sentinels of democracy.”

“Journalists have exposed the corruption and arrogance in Diouf’s government,” said Moustapha Ba, a journalist with the daily Le Matin newspaper. “Diouf did not take us seriously, but the people did.”

Just as important for poor Senegalese, whose only link to the world is by radio, journalists collected and broadcast a stream of unofficial election results publicizing Wade’s wide lead.

By Wednesday, electoral authorities had not released official results, although Diouf conceded defeat Monday on the basis of the journalists’ estimates. Wade’s party claimed he won more than 60 percent of the vote. “Nobody could have contested the will of the people because we, the journalists, were everywhere and recorded everything,” Fall said.

Until recently, Senegal was dominated by state radio, television, and newspapers. The emergence of the privately owned companies Walfadjri and Sud, which developed daily newspapers and radio broadcasts in the early1990s, broke the state media’s news monopoly. Bankrolled by Senegalese businessmen, the companies employ young university graduates who energetically challenge politicians.

While reporters’ salaries average just US$200 a month — low in relation to the cost of living — the companies have invested in modern equipment. Senegalese radio stations broadcast politicians’ screaming matches, and election debates sometimes turn into discussions about callers’ private lives. The newspapers are full of a range of political opinion.

Some of the change was possible due to Diouf’s government, which loosened restrictions on the press and ended the common African practice of arresting journalists on charges of libeling government officials. Diouf has long accused the private media of backing Wade’s campaign. Editors of Walfadjri and Sud denied that and said Wade was more accessible — sometimes holding several press conferences a day, while Diouf refused interviews until a week before the ballot.

AP WorldStream, Thursday, March 23, 2000 2:43:00 AM. Copyright 2000, The Associated Press. All rights reserved. The information contained in this news report may not be published, broadcast or otherwise distributed without the prior written authority of the Associated Press.