Independent journalism is under siege in Russia, where President-elect Vladimir Putin surfed to victory on a wave of docile press coverage 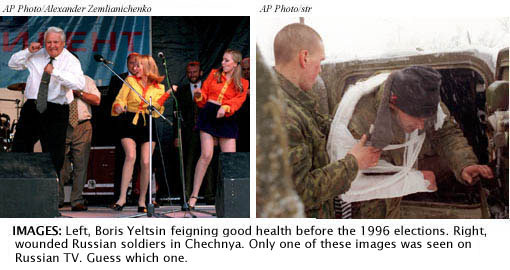 New York, March 27, 2000 — During the 1996 Russian presidential campaign, many voters were swayed by TV footage of Boris Yeltsin jiving with a dancer at a youth rally. Pro-Yeltsin stations splashed the footage because they wished to project an image of Yeltsin as a dynamic, youthful reformer. The TV image that helped assure Vladimir Putin’s victory in the March 26 election, on the other hand, was that of Russian artillery blasting Grozny to rubble.

Both images demonstrate how the Russian government has used the media to deceive their audience. The real story in 1996 was that Yeltsin was on the brink of another heart attack, which sympathetic Russian journalists did not report. Today, the absence of objective reporting about the war in Chechnya, of which acting president Putin is the architect, has kept the former KGB official’s popularity ratings high.

Throughout the conflict, virtually all Russian media have demonized Chechens and highlighted Russian military successes. At the same time they have downplayed the destruction of villages and cities, the plight of refugees, and allegations of brutality and torture by Russian troops.

Independent Russian journalists worry that with so many of their colleagues accepting the role of adjunct government flacks, the hard-won freedoms of the post-Soviet era could be in jeopardy. Meanwhile, there are ominous signs that independent journalism faces a bleak future under the Putin regime. 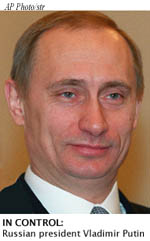 Media barons
In Russia, media control confers enormous political power. Consolidation of ownership was accelerated ahead of the parliamentary elections last December. Today it is difficult to name a single Moscow newspaper or broadcaster that is not directly controlled by one of three competing media conglomerates. One group is headed by business tycoon Boris Berezovsky, who is close to the Kremlin. Berezovsky controls the state television channel ORT and a number of influential newspapers. Another is the fiefdom of Vladimir Gusinsky, who owns NTV, the major private television station, and several publishing interests. The third is ruled by Moscow mayor Yuri Luzhkov, who controls TV-Tsentr and a handful of newspapers.

“The media barons have their own goals and, naturally, if journalists want to keep their jobs they have to go along with those views,” says Sergei Sokolov, deputy director of Novaya Gazeta, one of the few surviving independent newspapers. “The oligarchs’ views may not be so apparent when things are quiet, but it only takes an election for it to become absolutely clear which media group a particular paper or channel belongs to.”

Media bias reached fever pitch during the December parliamentary election campaign, when facts and balance lost out to slander and mud-slinging designed to destroy candidates’ reputations. Commentators such as Sergei Dorenko, who anchors ORT’s flagship political program, blatantly supported the pro-government party and mercilessly attacked its rivals. Though Dorenko used perhaps the greatest array of dirty tricks, almost all media put out openly biased material, to the open dismay of a few major quality newspapers such as Segodnya and Izvestiya.

Telling it like it is
Few Russian journalists even try to pretend that their reporting is not influenced by the owner’s political agenda. Moscow-based journalist Kirill Byelyaninov, for example, works for both a Luzhkov television program and a Berezovsky newspaper. He acknowledges a tacit understanding that certain subjects are off-limits. “You basically know what’s prohibited,” he says. “It’s clear to all of us which camp the owner belongs to, and what information is allowed. I cannot write anything concerning Berezovsky himself, or his business partners or ventures, and of course I cannot touch the Kremlin. With Luzhkov, I cannot write about Moscow or the city authorities.”

It also works the other way–journalists are encouraged to attack rival barons by any available means. “I dig up dirt on both,” Byelyaninov says. “If it’s dirt on Berezovsky I put it in the program, and if it’s dirt on Luzhkov then it goes in the newspaper.”

This willingness to skew coverage is partly a vestige of Soviet times, when writing to promote a particular official or political line was part of the job. In the glasnost years of the late eighties and early nineties, Russian journalists briefly reveled in their ability to express truly independent views. The 1996 presidential election proved to be a watershed, however, as most media openly backed the Yeltsin campaign. NTV president Igor Malashenko, notably, worked simultaneously as Yeltsin’s campaign manager. In his own defense, Malashenko argued that journalists had a duty to support the candidate who seemed most likely to protect press freedom.

The almighty ruble
Naturally, money also plays a role. Politicians pay journalists to push a particular line, and pay media executives to be invited on political programs. As a result, the proverb, “He who pays the piper, picks the tune,” has become popular in media circles. “Journalists find themselves in a situation where either they must serve their master like a dog on its hind legs begging for a piece of meat, or be without work,” says Pavel Gusyev, chairman of the Union of Journalists and editor of the Luzhkov-controlled daily Moskovsky Komsomolyets. “There are very few independent publications, and not all journalists can work for one.”

Today, press freedom is increasingly threatened by the government as well as by the press barons. State pressure on media intensified after Putin became acting president on December 31, 1999. Since then, the government has stepped up its censorship of Chechen war coverage and continued subsidizing regional media outlets in return for their support of government policies.

In January, Putin signed a new law transferring control of government subsidies for regional newspapers from local politicians to the press ministry. The law affects 2000 subsidized newspapers across Russia, and will act as a further mechanism for central government control. This is particularly true in the hinterland, where papers and broadcast stations are often dependent on local administrators for everything from floor space to computers. Given that subscriptions and advertising amount to a small fraction of local media’s operating costs, the subsidies are a crucial tool for influencing media content.

Cash is not the only weapon at Putin’s disposal, however. The state controls printing presses and has the power to issue and revoke broadcast and publishing licenses. It can also exert pressure by ordering tax inspections, a weapon frequently used by regional authorities to encourage friendly coverage.

At the national level, the government maintains unhealthily symbiotic links with leading journalists, many of whom glide comfortably from press jobs to government positions, and back again. If anything, this trend has accelerated since Putin took office. In January, NTV general director Oleg Dobrodeyev, who had helped build the channel’s reputation for balanced, professional news reporting, quit his job to run VGTRA, a vast conglomerate of fully state-owned television and radio outlets. And Mikhail Lesin, the head of the Press Ministry (set up last July to regulate all media in Russia) has had a typically muddy past–a former state television official, he was one of Yeltsin’s top image makers, and is now an apologist for Putin’s scorched-earth media relations policy. Lesin has stated that he disagrees “with the thesis that the state is more dangerous to the media than the media is to the state. I believe quite the opposite.”

Uncovering Chechnya
The Chechen military campaign has become Putin’s political launching pad. “His reputation to date has been founded on the bloody war in Chechnya, a fact which by itself should ring alarm bells,” says Yevgeni Kiselyov, the host of “Itogi,” (“Results”) a leading political affairs program on NTV. “Putin is a man of whom we know very little. Many people see him as too pragmatic, and doubt his fundamental democratic convictions.”

These doubts were partly fired by the Putin government’s severe restrictions on independent press coverage of Russian military activities in Chechnya. Coverage of the current Chechnya campaign has been markedly different from the 1994-96 war, when most media outlets, notably NTV, reported the conflict courageously and critically. This time around, few local media have opposed or even challenged the official line. The independent newspaper Novaya Gazeta is an exception, having devoted many column inches to the dearth of accurate government information about the war. But there has been little eyewitness coverage, partly because of the very real risk of being kidnapped by rebel forces if you travel without Russian military protection.

Andrei Babitsky, a Russian national who works as a correspondent for the U.S. government-funded Radio Liberty, was one of the few Russian journalists who chose to flaunt Kremlin restrictions on Chechen war coverage. He traveled independently through the war zone and sent eyewitness accounts of the impact of the conflict on ordinary people. In January, Babitsky was arrested by Russian authorities, beaten, and eventually released, following an international outcry, after spending more than a month in captivity. He is still under close official scrutiny, and is barred from leaving Moscow while his case is investigated.

Babitsky challenged the government monopoly of information by reporting from the Chechen rebel side, which infuriated Russian authorities and led to his detention. His treatment suggests that journalists who disobey the authorities can expect to be branded “enemies of the state.”

Babitsky notwithstanding, the Kremlin has successfully imposed an information blackout in Chechnya, particularly on the sensitive issue of Russian military casualties. By hiding the true casualty figures, the government has been able to sell the war to its citizens, many of them already terrified by last fall’s apartment bombings in Moscow and elsewhere, which the government blamed on Chechen separatists.

Acting president Putin also opened a government briefing center dedicated to eliminating independent journalism about Chechnya. Even before Babitsky’s arrest, the center accused him of “conspiracy with Chechen terrorists,” setting the stage for the government’s insinuation that his coverage was suspect and ran counter to Russia’s national interests.

Policing the Web
Russian Internet service providers are required by law to link their computers to the FSB, the successor to the KGB. Under an amendment signed into law by Putin and taking effect from January this year, an additional seven law-enforcement bodies have been authorized to monitor e-mail and other electronic traffic. Technically, all these agencies are required to obtain a warrant before examining private Internet communications, but local human rights activists suspect they may not always bother with legal formalities. “This is by definition a violation of the fundamental and constitutional rights of the citizen,” says Yuri Vdovin, deputy chairman of the St Petersburg-based group Citizens’ Watch. The Russian press has been largely silent on this issue.

Russians have good reasons not to trust or respect the press, but they are nonetheless affected by what they read in the newspapers and watch on television. As a result, the outcome of elections is greatly influenced by press coverage. Vladimir Putin has shown himself adept at manipulating public opinion in favor of his Chechnya campaign. During his first months in office, he has also demonstrated a desire to exert more control over the lives of the country’s citizens. That makes sense for a man who spent most of his career in the KGB, but it augurs badly for the future of independent journalism in Russia.

Emma Gray is CPJ’s program coordinator for Eastern Europe and the republics of the former Soviet Union.