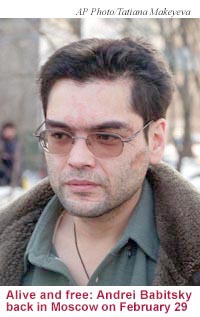 St. Petersburg, February 28, 2000—Although the freeing of Radio Liberty correspondent Andrei Babitsky, who disappeared in Chechnya on January 16, is certainly welcome news, it is by no means the end of this story. Russian federal authorities are still looking into “his alleged support for Chechen rebels,” according to the state news service Itar-Tass.

The Babitsky affair has become a crucial litmus test of acting Russian president Vladimir Putin’s policies, as well as of the ability of Russian society to understand and respond to those policies. Although Putin has made numerous statements, since taking office, that would seem to indicate his support for civil liberties in general and press freedom in particular, it is evident that he envisions a society in which all resources are marshaled in support of government policies.

Stronger state
For Putin, as for the vast majority of Russian politicians, the state (i.e. the executive branch) is both the guarantor of all personal liberties and the source of all public initiatives. “The stronger the government, the stronger personal freedom . . . ,” Putin said at the funeral of former St. Petersburg mayor Anatoly Sobchak on February 25. “Democracy is a dictatorship of law.”

As far as the Russian press is concerned, Putin’s “dictatorship of law” is a particularly ominous prospect given that the government in Russia controls the vast majority of media outlets and sets ground rules for all press coverage. Although Putin pays lip service to the idea that an independent press is a powerful safeguard against state corruption, he believes unambiguously that the role of the press is to generate public support for state initiatives, and not public discussion of them.

As Kremlin spokesman Sergei Yastrezhembsky told the newspaper Kommersant last month, “When the nation mobilizes its forces to achieve some task, that imposes obligations on everyone, including the media.”

Yastrezhembsky, who has been responsible for the strict control of information regarding the military action in Chechnya, is not the only member of Putin’s government to go on record with such views. Putin’s cabinet minister in charge of the press, Mikhail Lesin, has stated that “the defense of the state from the free mass media is a pressing problem at present. I don’t agree with the thesis that the state is more dangerous to the media than the media is to the state. I believe quite the opposite.”

In an op-ed published last week in the daily Nezavisimaya Gazeta, Foreign Ministry spokesman Vladimir Kozin wrote: “The reports that Babitsky relayed from Chechnya were beyond compare on a professional level. But, unfortunately, both his courage and his journalistic qualities were not utilized for the good of Russia, but to its detriment.” Neither Putin nor his deputies seem to be aware that the interests of Russian society and the interests of the Russian government need not necessarily coincide. 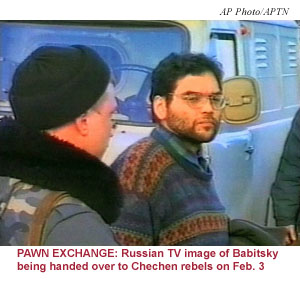 Weaker press
The Russian government’s efforts to control the flow of information out of Chechnya show its attitude toward the role of the press in society. The executive order on accreditation of journalists in Chechnya has been widely criticized by human-rights activists and legal authorities as unconstitutional and designed exclusively to enable the government to remove unwanted observers from the war zone. To date, many unaccredited Russian and foreign journalists have been forcibly expelled, while accredited journalists are in theory only allowed to report while accompanied by military minders. Moreover, the vast majority of non-state Russian media are too poor to send correspondents to Chechnya in the first place.

The Babitsky case also demonstrates that Putin’s “dictatorship of law” is really a dictatorship of the executive branch. By detaining Babitsky without charging him with any crime, the security forces usurped the prerogatives of the legislative and judicial branches, continuing the dangerous pattern of executive-branch domination that characterized the administration of Boris Yeltsin. It is indicative of the under-developed state of democracy in Russia that the parliament has refused to hold hearings on the Babitsky case or any other aspect of the government’s information policy on Chechnya, although some individual deputies have expressed concern about the matter. Likewise, non-binding court decisions concerning the administration’s information policy in Chechnya have either been stonewalled or else simply ignored.

Sluggish colleagues
Like the Russian public in general, local journalists were surprisingly slow to react to the Babitsky case. Many observers (and, perhaps, most average Russians) seem to feel that Babitsky may actually have done something to justify the government’s appalling treatment of him. Instead of immediately protesting a gross violation of due process and civil rights, Russian journalists became bogged down in an endless discussion of the content of Babitsky’s reporting.

The fact that Babitsky works for Radio Liberty, which is funded by the U.S. government, enabled Putin’s supporters to claim that foreign agents were working against Russia’s interests through mass media. Since the Chechen operation began last fall, representatives of the Russian government and military have repeatedly claimed that both Russian and foreign journalists covering Chechnya were in the pay of separatists and foreign security forces. On February 11, Putin himself told the newspaper Komsomolskaya Pravda that he saw nothing wrong with exchanging Babitsky for prisoners of war. “This was his own decision,” Putin said. “He went to the people whose interests he effectively served.”

The smear campaign climaxed on February 2, when a group of journalists from state-controlled media outlets in St. Petersburg joined the local representative of the Federal Security Service at a press conference to declare that the Chechens had paid “as much as $1.5 billion” to Russian journalists in exchange for coverage that favored their side of the conflict. Although no evidence to support this claim was produced, the press conference was shown on national television and the claim was disseminated to media throughout Russia via the Itar-Tass press agency.

It was not until a full month after Babitsky disappeared and ten days after the government exchanged him for two captured Russian soldiers that Russian journalists finally roused themselves to protest. By that time, most Western human-rights groups had already issued strident protests. On February 16, about 25 Moscow-based newspapers and civil-rights organizations published a special-edition newspaper devoted entirely to the Babitsky affair. The lead article stated that “what has happened to Radio Liberty correspondent Andrei Babitsky cannot be considered an isolated episode of contemporary life, but must be taken as a turning point in the struggle for a press that serves society and not the government.” On February 25, the organizers of this protest announced their intention of publishing a second special edition on Babitsky, this time with the support of the regional press as well.

The government’s information policy in Chechnya and its treatment of Babitsky are especially ominous in view of the impending Russian presidential elections. At the same time that the Russian government has actively spread the notion that unspecified journalists are working for foreign governments, it has also fanned public fears of renewed terrorist attacks such as the apartment-block bombings that preceded the Chechen campaign. The security organs have regularly issued statements that they have information on impending attacks. The municipal radio station in St. Petersburg went so far as to report that the extraordinary security measures taken during Putin’s visit to the city for the funeral of former mayor Anatoly Sobchak “are proof of the real danger of terrorist attacks.”

At the same time, state-controlled media have adopted the election-year tactic that worked so well for Yeltsin in 1996, namely playing up the fear of a communist return to power. At least once a week since Putin took over in the Kremlin, there have been significant “analysis” pieces in national media, both openly state-controlled and those that are nominally independent, suggesting that communist candidate Gennady Zyuganov might win the election on March 26.

Fortress Putin
The three major planks of Putin’s campaign platform are foreign subversion, Chechen terrorism, and a communist revanche. Under these circumstances, it is certain that the upcoming presidential elections here will be even less democratic than those of 1996. Consider the following: 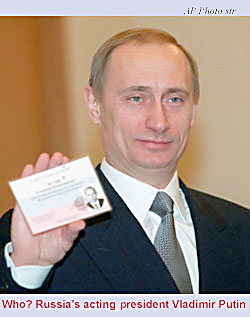 The Babitsky case is hardly an isolated incident: Putin has made it quite clear that his priority is to create a strong state, not an open society. As he told Komsomolskaya Pravda earlier this month, the Chechen operation “is only the beginning of the restoration of the state, of the strengthening of the state.” Likewise, he stresses that “change must be based on Russia’s long-standing traditions of justice and legality.” Such words, coming from a lifelong KGB agent, make it clear what sort of “dictatorship of law” we can expect.

Robert Coalson is a program director for the National Press Institute of Russia, based in St. Petersburg. He also writes a weekly column on the Russian media for The Moscow Times. Coalson’s views do not necessarily reflect those of CPJ.