War correspondents today must often choose between self-censorship and death. 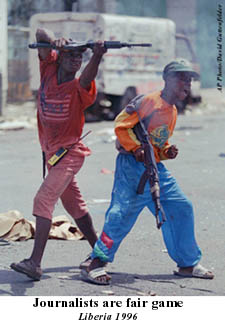 November 16, 1999 — In December 1994, about 70 Liberians were massacred in their homes in the capital Monrovia. Most were children. As a Reuters correspondent in Liberia, I watched angry protesters parade through the city, following a truck piled high with the burned corpses of the victims. The bodies were a grotesque medley of twisted limbs and a few scraps of clothing. As they marched, some protesters waved the charred corpses of young children in the air.

Nobody claimed responsibility for the massacre, and accusations were flying. Liberia’s transitional government blamed the warlord Charles Taylor, who was excluded from government at that time. Liberian journalists were under extreme pressure to toe the official line. Yet the evidence clearly pointed to members of the Krahn ethnic group, which was heavily represented in the Liberian army.

I reported the latter version of events. Soon after, I received a series of phone calls at my home from the Liberian army chief. In a mock-jovial manner, he told me that I should be “more careful” about my reporting, and asked what I had against him. On occasion I was summoned to the chief’s office at the Defense Ministry. Surrounded by armed men, the general would make clear what he did not like about my reporting.

As a foreign journalist, I felt much freer to report the news than my local colleagues, many of whom faced a stark choice between self-censorship, death, or exile. There is currently no official censorship in Liberia. But many Liberian journalists say they are afraid of the infamous security forces, which have long waged a campaign of harassment, intimidation and even murder against President Taylor’s critics. For this reason, local reporters generally avoid sensitive topics such as Taylor’s alleged support for Revolutionary United Front rebels in neighboring Sierra Leone, a charge that Taylor has consistently denied.

In short, many Liberian journalists choose self-censorship. Journalists are taught to believe that self-censorship is unethical. But in trying to find a balancing point between unreasonable risk and unethical journalism, one should consider the pressures that encourage journalists in modern war zones to censor themselves. Since the end of the Cold War, most conflicts have been waged within state borders, and rarely by conventional armies facing each other on a clearly defined battlefield. Many modern combatants are illiterate children; relatively few are uniformed soldiers who know and care about their responsibility to protect journalists under the Geneva Conventions. As distinctions between soldiers and civilians have blurred, combatants have become increasingly willing to target refugees, aid workers, and journalists in order to achieve strategic goals that often include killing or expelling as many members of a given ethnic or national group as possible.

All these factors combine to make contemporary conflict reporting a uniquely dangerous profession. Official attempts to replace independent journalism with state propaganda don’t help matters. In Angola, for example, the government has effectively forced local journalists to stop covering the UNITA rebel movement and its leader, Jonas Savimbi. Angolan journalists live in a state of fear and self-censorship. They also have little access to UNITA. As a result, many local journalists either toe the government line or find new lines of work.

A few journalists, however, have been outspoken in their criticism of the Angolan government and the armed forces. They have endured concerted harassment campaigns or prolonged detention without charge (as in the case of freelance journalist Rafael Marques, who has been jailed since mid-October for publishing an article in which he referred to President José Eduardo Dos Santos as a “dictator”).

The fruits of objectivity

Obviously, many modern governments use their power to stifle independent journalism. In the former Soviet republic of Tajikistan, for example, the “independent” press works in an environment of harassment, violence and censorship. At least 29 journalists were murdered during the four-year civil war, which officially ended in 1997. Despite the government’s promises of democratization, President Rakhmonov managed to eliminate all substantive media coverage of the Islamic opposition in the run-up to the November 1999 elections. And journalists with the slightest survival instinct shun reporting about the ruthless mafias that effectively control the country’s economy, largely through a rampant drug trade.

Foreign reporters are by no means immune to these pressures. During my six month assignment as a BBC and Guardian reporter in the capital Dushanbe, in 1998, I was frequently followed and my phone was tapped. My car was also broken into on a regular basis. On one memorable occasion, a large bowl of fruit disappeared from the kitchen table of my top-floor apartment. This posed a puzzle worthy of Sherlock Holmes: all the apartment doors were locked from the inside, and entry from the roof would have been perilous.

Local journalists told me this was “just the KGB” letting me know they were watching me. My colleagues also warned me not to walk around the city alone because of the risk of being kidnapped by local gangsters or Islamic opposition groups. Journalists were by no means the only target: in December 1998, for example, four U.N. observers were abducted and brutally murdered.

Unsurprisingly, local journalists and foreign correspondents based in Tajikistan hardly ever wrote or broadcast anything too critical about the government, the opposition, or the mafias. But how many compromises can a journalist make before he or she stops being a journalist? In an ideal world, journalists would never compromise their objectivity. But in hostile conflict situations, where journalists are often moving targets rather than neutral observers, ethics can conflict with self-preservation. This is especially true for local journalists, who may not be able to pack up and leave when danger reaches critical levels.

My experience in Tajikistan gave me new appreciation for the local colleagues I had left behind in Liberia and Sierra Leone. In West Africa, I was able to tackle sensitive stories not because I was braver or a better journalist, but rather because as a foreign correspondent my profile was much higher than theirs. In Tajikistan, a country that was virtually off the Western media map, I was in the same boat as my local colleagues. We all knew that if we got killed for our work, few people would notice or care.

The greatest protection journalists have is their visibility. As an Africa specialist at the Committee to Protect Journalists, my goal is to give all journalists in Africa the same profile that I enjoyed as a foreign correspondent in Liberia and Sierra Leone. We can’t expect all journalists to be heroes. In the long run, our best weapon against self-censorship is to reduce the risks that journalists face.