A version of this report appeared in The News magazine on September 7, 1998.

Emerging from a five-year siege and brutal repression of the opposition press and civil society, Nigeria, expectedly was the focus of the four- day conference on “The State of The Media in West Africa,” organized by the New York-based Committee to Protect Journalists (CPJ), and the West African Journalists Association (WAJA). 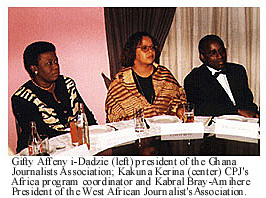 In what was a close examination of the critical press in Nigeria, especially under the brutal dictatorship of General Sani Abacha, the first working session on “The State of the Media in Nigeria,” dwelt on how the press against all odds engaged the military dictatorship in a battle of wits.

Lanre Arogundade, Chairman, Lagos State Council of the Nigeria Union of Journalists (NUJ), affirmed that in Nigeria, only Abacha’s death is what has changed and cautioned that though emerging from a particularly dark era, there is no total respite yet for the press. Arogundade drew attention to the notorious Decree 2 which the military has refused to repeal, and the proposed National Mass Media Commission, as major threats to press freedom. Doifie Ola of the Environmental Rights Agenda (ERA), maintained that journalism in Nigeria is death itself. Death to the journalist who loves equity and freedom. The press, he asserted, is an easy prey for the military and civilian power elites who are always engaged in the bitter power struggle.

Soji Omotunde, Editor, African Concord recently released from detention told the moving story of his Gestapo-fashion abduction by security operatives and his six months ordeal. “If there was hell, I was made to go there.” Neither bitter nor bowed, he declared that inspite of the ordeals of the press “…..we survived. We have outlived the beast.” He located the new found radicalism of the Nigerian media in the long period of a military dictatorship which brooks no opposition.

Owei Lakemfa, a prolific writer from the Vanguard stable thanked the “prostitutes” who reportedly spent the last night with General Abacha, for intervening, to rid Nigeria of the most-brutal dictator ever foisted on it. He identified three categories of journalists under Abacha’s full-blown dictatorship-those in detention, those in exile and those that remained and operated under severe repression and risks. “We must begin to meet the military blow by blow,” he declared.

Nosa Igiebor, Editor-in-Chief of TELL magazine decried the present romance of the international community with the military dictatorship in Nigeria, and warned that it is a romance that will soon go sour. He condemned the grand larceny and looting of the Abacha regime, especially by his military cohorts and civilian collaborators adding that in Nigeria, nothing has changed. He described the present state of the Nigerian press as that of exhaustion — physical and financial. “What we are experiencing now is some honeymoon. We don’t know how long it is going to last.”

Bayo Onanuga, Editor-in-Chief of TheNews/TEMPO/P.MNews group drew attention to the censorship environment under which the press operates and the high degree of banditory under military rule. He went to great length to explain how one of the security outfits in Nigeria has manufactured facts to explain the possible dastardly murder of one of the senior correspondents of the group, Bagauda Kaltho, 32 months after the man was arrested. He described as “dumb-founding” both news of Bagauda’s death and the attempt to label ICNL, TheNews publishers as a terrorist organization by the Nigeria Police. According to Onanuga, the experience of TheNews shows the extent to which a dictatorial government will go to blackmail the critical independent press. 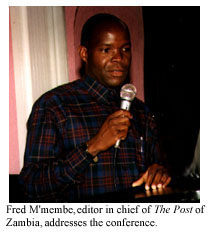 From Zambia came Fred M’embe, a mass communicator and publisher, who holds the distinction of being the first journalist to be banned on the internet by the Zambian authorities. Explaining on how new technologies could be utilized to circumvent state intervention, M’embe told the interesting story of how Chiluba, a friend turned foe, tapped his telephone line. He, in turn, devised a means of tapping Fred Chiluba, a development he described as classical case of ‘Fred Freding Fred.’

Kwesi Pratt, publisher of the Ghanaian paper, Weekly Insight, a vocal voice detained more than 14 times and regarded as the ‘Ghanaian Gani Fawehinmi,’ argued for joint action across Africa among journalists.

The session on “Publish or Perish,” which touched on methods of circumventing state interference in distribution and production, provided a broad insight into the practice of defiant publishing, alternately called “guerrilla journalism” which emerged in the last five years. Idowu Obasa of theNews/TEMPO/P.MNews magazine and Kola Ilori of TELL magazine relayed stories of how their publications operated from the trenches. How they led a team of journalists to work from the underground, under risky conditions to publish the truth. Obasa, traced the history of “guerrilla journalism” in Nigeria to the emergence of TEMPO magazine after The News magazine was proscribed by the Babangida regime in 1993. “Rather than give up, we were emboldened to continue publishing in spite of many attacks and setbacks,” he enthused. He pointed out that the cost of practicing “guerilla journalism” is great, ranging from high cost of production, loss of revenue, and magazine seizure to arrest and detentions.

Worried by the infiltration of professional bodies such as the Guild of Editors and Nigeria Union of Journalists (NUJ), which parade government stooges in position of leadership, Babafemi Ojudu, managing editor of TheNews, argued forcibly for the establishment of an independent Guild Editors, that will be well-equipped to fight the other battles of professionalism and costs.

On the vital issue of litigation in the age of decrees, Richard Akinnola, Edetaen Ojo, Femi Falana and Fred M’membe, and everybody else at the conference agreed that it was time to challenge, through campaigns and litigations, gag laws especially decrees and the need to use litigation as a moral weapon. Bertie Howard of the Washington D.C.- based Africa News Service, called for partnerships between African news organizations and foreign groups using the internet as a common newsroom. An African-American, she declared: “The four-day conference … was critical in its assessment of military dictatorship and other run democratic governments on the African continent.”

Significantly, it enabled journalists and members of the civil society from different climes to compare notes, share experiences, brainstorm and to redefine new strategies for the struggle ahead.