Dangerous Assignments
Since taking office in 1990, Peruvian President Alberto K. Fujimori has used Peru’s secret services to intimidate and control the press. But now, with Fujimori maneuvering toward a bid for an unprecedented third term, Peruvian journalists say a new and intensified crackdown in under way.

In the last few months, Peruvian journalists have documented a campaign of spying, systematic wiretapping, false arrest on charges of terrorism, and disinformation. While attacks on journalists in most of the rest of Latin America are perpetrated largely by criminal gangs, there is strong evidence of a government-orchestrated campaign in Peru.

Fujimori’s battle with the press dates back to his 1990 presidential campaign, when journalist Gustavo Gorriti published stories detailing Fujimori’s relationship to Vladamiro Montesinos, a shadowy former Army captain and CIA informant whom Fujimori appointed to head the National Intelligence Services (SIN). On April 5,1992, in what is referred to as the self-coup, Fujimori dissolved Congress and took absolute control of government. That same night, commandos from the Army Intelligence Service (a division of the National Intelligence Service, run by Montesinos) kidnapped Gorriti. He was eventually forced to flee Peru; he now lives in Panama.

Peruvian journalists report that tension between the Fujimori government and the press began to mount during the four-month-long hostage crisis that ended in April 1997 with an assault on the Japanese Embassy in Lima by an army commando unit. Many people in the government resented the press coverage because they felt it was jeopardizing the safety of the hostages and the security of the rescue operation. And once the crisis ended, Fujimori seemed to calculate that he could use his heightened public support to attack his old nemesis, the press.

One of his principal targets was Canal 2-Frecuencia Latina. Since late 1996, Frecuencia Latina had aired a series of explosive allegations about the Fujimori government. The station made public Vladimiro Montesinos’ tax returns, broadcast allegations about the torture and murder of former intelligence agents, and aired snippets of conversations recorded by the SIN between journalists and opposition politicians. The station also broadcast secretly recorded conversations between known drug traffickers and army officers.

In July 1997 the Peruvian government began a counter-attack. Frecuencia Latina’s Israeli-born owner, Baruch Ivcher, was stripped of his Peruvian citizenship and eventually forced to leave the country and cede control of the television station. Reporters have been attacked, threatened, accused of aiding terrorists, and forced into exile. Since Ivcher’s departure, minority shareholders in Frecuencia Latina have assumed control of the station and held it to a strictly pro-government line. 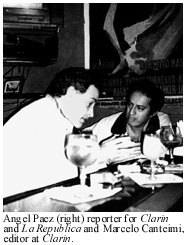 International outcry over the attacks on Frecuencia Latina seems to have forced the intelligence services to use more subtle measures. In March of this year, several tabloid newspapers in Lima began publishing attack pieces against prominent investigative journalists, accusing them of being communists, traitors, and “prophets of the devil.” Angel Páez, an investigative reporter for the Lima-based daily La Repœblica and correspondent for the Argentine daily Clar’n who had broken several stories about corruption in the military, was accused of being an agent for Ecuador, with whom Peru is engaged in a long-running border dispute. Suspicion of government sponsorship of the tabloid stories was fueled by the fact that those papers were replete with government advertising. Páez also uncovered a fax sent to one of the tabloids containing the text of a defamatory article that was published verbatim the next day. The fax was sent by Augusto Bresani, who has long worked as an advisor to the Peruvian high command.

Faced with mounting evidence of a systematic campaign, the Press and Society Institute (IPYS), a Lima-based press freedom organization, invited an international delegation to visit Lima in June. Representatives from the Committee to Protect Journalists, Reporters sans Frontieres, The Freedom Forum, the Buenos Aires-based press group Periodistas, and the foreign editor from Clar’n met with editors and government officials, including President Fujimori. Fujimori promised to conduct an investigation to determine possible government involvement in a campaign against the press, but declared that it was not “state policy.”

The press groups’ embassy was widely covered both in Peru and international media. At the end of the visit nearly 200 Peruvian journalists gathered to sign a petition to Fujimori denouncing the recent attacks on the press. While conditions seemed to improve in the immediate aftermath of the visit, familiar problems have resurfaced recently. In the most serious matter, federal prosecutors are considering filing treason charges against Cesar Hildebrandt, the host of a popular nightly news program, for broadcasting the results of a closed-door session in Congress.

In fact, with the Congress full of Fujimori loyalists, and the Supreme Court packed with government supporters, the only institution demanding government accountability in Peru is the press. If Fujimori succeeds in using spies and intimidation to silence journalists in anticipation of his third term, he will set a dangerous new precedent that could be imitated by autocratic leaders not just in Latin America, but around the world.