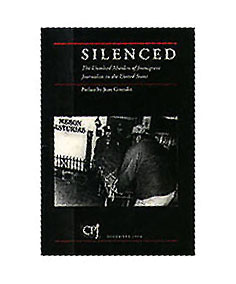 Silenced: The Unsolved Murders if Immigrant Journalists in the United States, published by the Committee to Protect Journalists in December 1994, cover shot shows the body of New York investigative journalist Manuel De Dios Unanue being removed from his favorite restaurant in Queens, where he was murdered on orders from Colombian drug traffickers. (March 11, 1992)

The two remaining defendants in the Manuel de Dios Unanue murder trial were sentenced to prison on Oct. 30.

De Dios had been editor in chief of New York City’s leading Spanish-language daily El Diario/La Prensa and was renowned for his muckraking exposés of drug traffickers in two upstart Spanish-language magazines he distributed in Queens. He was murdered execution-style in 1992 in a Queens restaurant at the direction of leaders of a Colombian cocaine cartel.

The two defendants sentenced in October had pleaded guilty and turned against others involved in de Dios’ murder. As a result of their cooperation, they were given reduced prison sentences: Juan Carlos Velasco received 15 years–he potentially faced up to life–for abetting de Dios’ killing by recruiting other conspirators and for killing two other men in a separate case; and Velasco’s wife, Elizabeth Castaño, received 18 years–she faced up to 30–for having identified de Dios for the gunman.

In all, a total of seven people were indicted for de Dios’ murder. Five, including Velasco and Castano, pleaded guilty. All except Velasco received 18-year sentences. A sixth, Wilson Mejia Velez, the gunman, was sentenced to life in prison in 1994. The seventh, Guillermo Leon Restrepo Gaviria, who prosecutors said was paid $50,000 for the contract assassination, remains a fugitive. And earlier this year, the head of the Cali cartel–José Santacruz Londoño, an unindicted co-conspirator in the case–was murdered in Colombia.

Ever since de Dios’ murder, CPJ has investigated and publicized his case and ones like it, publishing in 1994 the investigative report Silenced: The Unsolved Murders of Immigrant Journalists in the United States and pursuing the cases with the Justice Department and others at the highest levels.