Prageeth Eknelygoda’s wife, Sandhya, at left, has been in close contact with CPJ since his disappearance on the night of January 24, just two days before the hotly contested Sri Lankan presidential elections. She was a primary source for our May investigative report, In Sri Lanka, no peace dividend for press. As we noted in our alert today, she has started to organize prayer vigils at Hindu and Buddhist temples and Christian churches around the country, trying to pressure the government into helping her locate her husband. Although they have had no word from him, she and her two sons, 16 and 13, are convinced Eknelygoda, below, is still alive.

(A slide show of Prageeth Eknelygoda’s cartoons can be seen here.)

For Sandhya and others who are concerned about the safety of Sri Lankan journalists, Prageeth Eknelygoda’s disappearance is evidence that the government’s attitude toward journalists has not changed since the of President Rajapksa’s re-election in January.

In an e-mail message today, Sandhya told us: 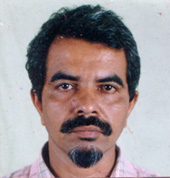 It has been six months since Prageeth disappeared. There has been no news of him. People say many different things, but I don’t believe them, and don’t want to accept that he is no more. For, if I accept, I won’t be able to carry on my fight, not just to find him, but even get him justice. If I stop, those who are responsible for his disappearance will walk free. I don’t want that to happen. If Prageeth is no more, I need to find out what happened to him and the people who are responsible for the dastardly deed. I also want to bring those people to justice. My hope and my belief give me strength to carry on with my mission. I will, someday, somehow, find out the truth.

Even though Prageeth has been missing for six month, there has been no official statement from the government or any responsible officials. I have gone to courts. The last hearing was on July 21 where several witnesses were questioned. The defendants (the police) did not come, although the judge had issued notice they be present. The judge ordered that notice be issued again.

The police are expected to uphold law and order. Their failure to appear in courts is an insult to the judiciary and makes a mockery of the law and order they are expected to protect and maintain. An ordinary person can be ignorant, but it is sad when the police, tasked with upholding the law, break it.

This is why I have to go beyond the law and seek divine assistance. This is why I decided to go to kovils, temples, and churches and hold prayer vigils. I am hopeful that other women whose husbands or sons have disappeared will join me in my endeavor.

Sandhya Eknelygoda made her remarks in Sinhala. They were translated by a CPJ colleague in Colombo.