It’s been almost a month since I arrived in the United States. Oddly, I haven’t felt homesick or strange here even though this is my first time ever outside Iraq. I was born in Baghdad in 1986. I never lived anywhere else. Baghdad is where my father and mother were born, fell in love, and married. It’s the city where I grew up and got my university degree. It’s the city that holds all of the memories of my 23 years. I’m trying to understand why I don’t miss it, and I keep coming back to this: Maybe it’s because I never felt comfortable there, whether in my childhood under the dictatorship of Saddam or my adulthood under the American war against terrorism.

The first step I took in America was at Chicago O’Hare Airport. I had my passport checked very smoothly and very quietly. The officer took a picture, and my new, unmarked passport received its first stamp with the arrival form I-94; it meant a lot to me. Despite the sadness of leaving my country for the first time I felt happy because my first residency outside Iraq is in America. I kept looking at that red stamp and feeling very proud. Iraqis are not all that welcome these days in many countries, but it is different in the land of opportunity. 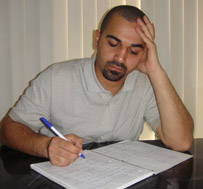 On the way to Tucson, Arizona, I made an unexpected stop in Atlanta. In Baghdad, I was told that I would be resettled in Tucson but when I got to Chicago, I was sent on to Atlanta because of a mix-up. Arriving around midnight, I was housed in an apartment along with several other refugees. The next day, my colleague from The New York Times’ Baghdad bureau, Erica Goode, was already in contact with my sponsor (the International Rescue Committee) to straighten out my ultimate destination. Things were corrected after five days and I was finally on my way west.

My experience in Atlanta was not a complete waste of time. It was there that I learned my first lesson in America: how to fasten a seatbelt while you’re a passenger in a car. This is something we don’t ever do in Iraq. People sometimes say in Iraq that this seatbelt, which was designed for your safety, might kill you because you may get trapped inside your car during an explosion. I don’t blame them because I witnessed many people who had been burned alive inside their vehicles in explosions in Baghdad; as a journalist, a big part of my job was to cover bombings.

With this new lesson, I flew from Atlanta to Denver on my way to Tucson. I felt very lucky because a lot of people offered to help me settle in. Many of these people are current and former employees of The New York Times who had heard about my story through Erica. She tried her best to help me because she knew what I was going through in Baghdad. She was like a mother to me and for some reason, I felt like a son to her–that’s why I could open up with her and tell her my stories. I confided in her, and she could sense the sorrow–the sorrow of my lost youth–just by looking into my eyes when we were working together in Baghdad. She just knew that I was forced to accept my life in Iraq; the main goal of this life was to survive your day.

I arrived at the Tucson airport and my new American family was waiting for me there. Lew Serviss, a former senior editor at The New York Times and a professor at the University of Arizona’s School of Journalism, and his wife, Naomi, a freelance journalist, were to become like my parents in America. I felt as though I had known them for a long time. They overwhelmed me with their kindness; I felt like a little child between them. Ford Burkhart, a former New York Times foreign desk editor, is like a godfather to me because he has wisdom and kindness at the same time. He even held up a sign when I walked out of the airport gate that said “Welcome Mudhafar” spelled in Arabic. Aram Mohammed, a young Iraqi who works with the International Rescue Committee is my case worker, was also there to greet me. He’s only been in the U.S. a few years himself.

When I was told in Baghdad that I was approved to go to America and specifically to Tucson, I quietly sneaked onto one of the computers in the Times newsroom to Google this city that I’d never heard of before. The first thing I saw was the saguaro cactus, which I had seen only in movies or cartoons. I was surprised when I saw them standing outside the airport as if they were petrified humans–giant green forms with arms that seemed to beckon. “Can this be real?” I said to myself, as I examined the cactus and thought of the ones in the cartoons. It was one of the funniest moments I’d had in a long time.

From my first minutes there, I felt a familiarity in Tucson. It almost looked like Baghdad. The direct heat of the sun reminds me of my last days in Baghdad; summer is the only distinguished season in Baghdad. It lasts for eight months and the rest of the year is divided among the rest of the seasons.

I feel like I’m home. It’s hard to explain that feeling, but home is not only that building you live in, home is where you feel safe and secure. Home is where you can move freely with no fears. It’s so sad to think that your family, relatives or friends can’t live the same way in Iraq. The war brought nothing to Iraq but destruction and chaos. That’s all.

Mudhafar al-Husseini worked at The New York Times in Baghdad for two years, reporting news stories and writing blog entries as well as acting as a fixer and translator for other reporters. Before that, from 2004 to 2006, he was a translator for the U.S. Army in Iraq. He graduated from Baghdad University in 2007 with a degree in English literature. Now living in the United States, he is updating us on this new chapter in his life.

Mudhafar al-Husseini was a reporter, fixer, and translator for The New York Times in Baghdad for two years. He is author of the CPJ Blog series, “Finding Refuge.”