New York, March 5, 2009—The Committee to Protect Journalists has seen a groundswell of support for Roxana Saberi, an American journalist who is being held without charge at Tehran’s Evin prison, through its Facebook petition. Saberi, 31, was detained at the end of January and has not been heard from since February 10. She is a freelance journalist who has worked for multiple international news outlets from Iran for six years. 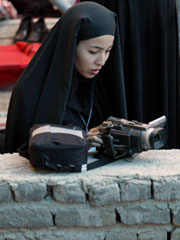 CPJ has extended the deadline for signatures because after just two days more than 5,000 people have added their names to its call for Iranian President Mahmoud Ahmadinejad to use his power to make certain that Roxana Saberi receives due process and access to an attorney.

CPJ hopes to reach a total of 10,000 signatures. The petition will be delivered early next week to the Permanent Mission of the Islamic Republic of Iran to the United Nations in New York.