The stakes are high. Journalist-formed rock bands with names like “Suspicious Package” and “The Surge” will compete this Friday night, January 9, at the usually austere National Press Club in Washington. The question of which band will walk away as the “single undisputed champion” will be decided, according to the official Journopalooza Web site, in a battle “following a long-held tradition of the Streets.” 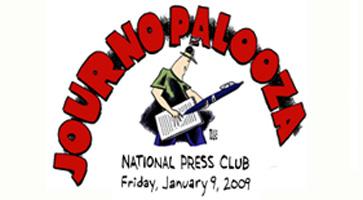 Proceeds will be split between CPJ’s Journalist Assistance Fund and National Press Club training and scholarships.

Click here for tickets or to donate and get a Tom Toles-designed T-shirt.

UPDATED: This entry has been updated to reflect that David Marash is master of ceremonies and Christina Davidson is organizer