New York, September 8, 2008—South Ossetian and Russian authorities should immediately release three members of a Polish television crew detained today near the village of Karaleti in the buffer zone between South Ossetia and Georgia, the Committee to Protect Journalists said. Authorities confiscated equipment and cell phones from the Telewizja Polska (TVP) crew and were holding the three members incommunicado in the regional capital, Tskhinvali, according to CPJ sources. 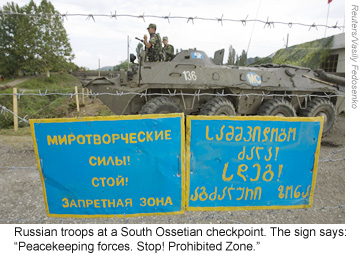 A unit that described itself as South Ossetian police detained reporter Dariusz Bohatkiewicz, cameraman Marcin Wesołowski, and driver Levan Guliashvili at around 4 p.m. local time today when they tried to enter the region to cover an expected Russian troop withdrawal, according to CPJ sources and press reports. Guliashvili is a Georgian national.

“We call on South Ossetian and Russian authorities to immediately release Dariusz Bohatkiewicz, Marcin Wesołowski, and Levan Guliashvili and to return their equipment,” CPJ Europe and Central Asia Program Coordinator Nina Ognianova said. “South Ossetia has seen little independent reporting since the conflict erupted in in early August. All sides should stop harassing journalists and obstructing their work.”

David Labadze, a Georgian correspondent for TVP, the Polish public broadcaster, said the crew was traveling to Karaleti in the Russian-controlled buffer zone between South Ossetia and Georgia. He said Russian troops at a checkpoint denied entry to the village after the crew members could not produce press accreditation issued by the Russian Foreign Ministry. When the crew tried an alternate route into Karaleti, he said, they were stopped and detained.

Labadze, who was in Karaleti today with representatives of the Polish Embassy in Georgia, told CPJ that a crew member was able to send a text message to TVP’s Tbilisi bureau before his phone was seized. The message said the crew had been detained but was not mistreated. The TVP Web site said the crew members were later transferred to Russian military custody.

Reuters quoted Maciej Dachowski, Poland’s deputy ambassador to Georgia, as saying that the crew was “taken into custody by a unit claiming to be the Ossetian police but immediately after that they were handed over to the Russian military forces operating in the area.” Zbigniew Wiktorowicz, a representative of the Polish Embassy in Georgia who was in Karaleti, told CPJ the embassy was talking to both South Ossetian and Russian officials, but authorities had not given an explicit reason for the detention.