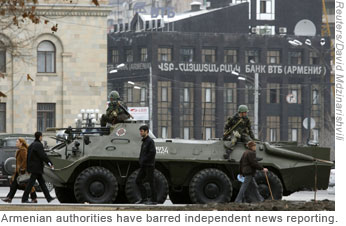 Kocharian declared a 20-day state of emergency after clashes between government troops and opposition supporters in the capital, Yereven, resulted in eight deaths and more than 100 injuries, according to international press reports. Protesters claimed that vote-rigging marred the February 19 presidential election that ended in victory for Kocharian’s hand-picked successor, Serzh Sarkisian. Hundreds of troops were deployed in Yerevan to clamp down on the demonstrations. The state of emergency also banned public gatherings, set travel restrictions, and gave police expanded search powers, according to international news accounts.

As part of the declaration, Kocharian ordered media outlets to cite only official sources when reporting on national politics. Several independent and opposition news Web sites that operate under Armenian domain names were also blocked today. They included Web sites run by the pro-opposition news agency A1+ and the independent newspapers Aravot (Morning) and Aikakan Zhamanak (Armenian Time), according to the news agency Armenia Today. Armenia Today reported that local Internet users received a message that said: “Warning! As ordered by a state decree, some informational Web sites will not be accessible.” The Armenian Service of the U.S.-funded Radio Free Europe/Radio Liberty (RFE/RL) was blocked within the country.

“We’re alarmed by this blatant attempt to censor news of the disputed election,” CPJ Executive Director Joel Simon said. “We call on Armenian authorities to withdraw the ban on independent newsgathering and dissemination, and restore access to independent and opposition media.”

Sarkisian took about 53 percent of the vote on February 19, according to official results, and is due to take office in April. Rival candidate Levon Ter-Petrosian, who was Armenia’s first post-Soviet president, contested the results and claimed the election was rigged, according to RFE/RL.

The Organization for Security and Co-operation in Europe, which monitored the election, said the vote was mostly in conformance with international standards. But OSCE monitors noted flaws in vote-counting and said officials blurred partisan and governmental interests.

Up to 20,000 Ter-Petrosian supporters began rallying in Yerevan on February 21; their skepticism about the results was fanned when two Central Elections Commission members and a deputy prosecutor general publicly questioned the fairness of the vote, RFE/RL reported.

Authorities deployed police when Ter-Petrosian’s supporters built a tent camp on the capital’s Freedom Square and groups of protesters staged rallies in front of different government buildings, the news agency Regnum reported. The stand-off reached its peak on Saturday morning when police, claiming that they had received reports of alleged arms distribution and coup plotting, started dismantling the tents, according to local press reports.

Angered protesters, in turn, attacked police with metal rods and Molotov cocktails, burned cars, and looted local shops, Reutersreported. The protests calmed when Ter-Petrosian called on Sunday for a halt to the violence, Regnum said.