New York, March 14, 2008—The Committee to Protect Journalists denounces yesterday’s brutal attack on Agil Khalil, a reporter with the opposition daily Azadlyg (Freedom). Four unidentified assailants encircled Khalil as he was leaving his office in the evening; one stabbed him in the chest, according to the Baku-based Institute for Reporters’ Freedom and Safety (IRFS). The hit narrowly missed Khalil’s heart, doctors who operated on him last night told the local press. 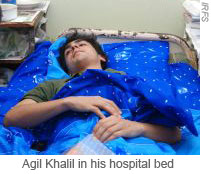 “This is the latest in a series of violent attacks carried out in an attempt to intimidate journalists in Azerbaijan,” CPJ Executive Director Joel Simon said. “We call on the police to apprehend all those involved in this cowardly act. Failure to do so would once again embolden the enemies of Azerbaijan’s independent and opposition press.”

Khalil, 25, was leaving Azadlyg’s office in Baku at around 8 p.m. yesterday, when he was approached by the four men. Khalil recognized one of them as having followed him for several days and tried to flee, but the small group surrounded him and prevented him from doing so, IRFS’s director, Emin Huseynov, who visited Khalil in the hospital today, told CPJ.

IRFS correspondents arrived at the scene a couple of hours after the assault and tried to interview police and witnesses, but they refused to talk to them, Huseynov told CPJ. CPJ was unable to reach the Yasamal District Police in Baku—in charge of the criminal investigation—for comment immediately.

This was the second assault on Khalil in a month. Two unidentified men attacked the journalist on February 22 as he was trying to report on the cutting down of trees in the Baku area known as Olive Gardens. The men beat Khalil, broke his finger, took his press ID, and tried to strangle him with his camera’s cord. Khalil immediately reported the incident to police. Before the attack, Khalil had been warned not to report on the matter, the IRFS said.