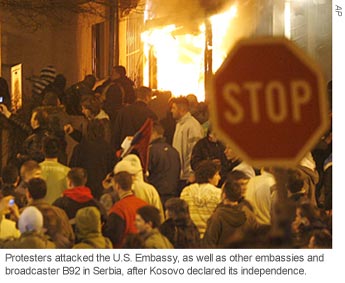 New York, February 22, 2008—The Committee to Protect Journalists denounces yesterday’s siege in Belgrade of the independent radio and television station B92. Threats have been waged against the broadcaster since violence flared as a result of Kosovo’s declaration of independence on Saturday. Also, CPJ is appalled by a graphic video that appeared on YouTube on Saturday showing B92’s anchors being targeted by a sniper and killed. As of Friday, the video remained up.

“We are appalled by the attacks on B92,” CPJ Executive Director Joel Simon said. “We call on Serbian authorities to guarantee the safety of our colleagues and thoroughly investigate the threats against them.”

Part of the rallying crowd marched to the B92 building around 6 p.m., besieging it and trapping the journalists inside. The protesters accused the station of pro-Western bias and called the staff “traitors of Serbia,” Sasa Mirkovic, director of external relations at B92, told CPJ.

Veran Matic, B92’s CEO, told CPJ he had to send several appeals to the Ministry of the Interior before it sent enough police reinforcements to guard the building. The siege lasted several hours; staff was still at the building at around midnight when CPJ spoke with Mirkovic. Earlier in the day, the station received an anonymous bomb threat by e-mail—the staff was evacuated from the premises, Slobodan Kremenjak, B92’s legal advisor told CPJ.

The siege on B92 appeared to be the culmination of several days of anonymous threats posted on nationalistic, right-wing Internet forums and e-mailed to the station. The threats called B92 a traitor and the reason Serbia was “losing” Kosovo and contained inflammatory language. Many openly called for the burning of B92’s building.

The station has sent appeals to Belgrade prosecutors and the Ministry of the Interior to investigate the threats, Kremenjak told CPJ. For now, it continues to broadcast in its regular format. B92 is a popular, politically liberal broadcaster that shows news and in-depth investigative reporting.

Their balanced coverage of Kosovo’s declaration prompted the anger of nationalists and right-wing radicals, who condemn Kosovo’s secession.

The predominantly ethnic Albanian province of Kosovo, under temporary U.N. administration since June 1999, was a part of Serbia until February 17. U.N.-backed talks for a final resolution of Kosovo’s status started in early 2006, but Belgrade and Pristina were unable to reach an agreement, keeping ethnic tensions high.