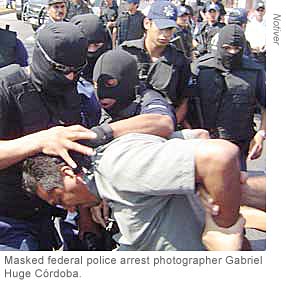 Huge, a crime photographer for the Veracruz-based daily Notiver, was among several local journalists who arrived at the scene of a 2: 45 p.m. accident involving a PFP convoy, according to local press reports. PFP officers told photographers to leave the scene, according to Huge and news accounts. When Huge moved to a side street to photograph the accident, he was approached by other PFP members who were wearing masks, the journalist told CPJ. According to Huge, the officers accused him of not obeying their orders, handcuffed him, hit him in the back with a rifle butt, and pushed him into the back of a pickup truck.

Huge told CPJ that he was held face-down on the bed of the vehicle, driven around the city for several hours, and repeatedly kicked. PFP members told the photographer that he was being punished for perceived negative coverage about the PFP in the local media. Several local news outlets carried Huge’s account. One report said Huge’s equipment was confiscated as well.

The photographer told CPJ that he was dropped off at the office of the Veracruz state prosecutor at 6:30 p.m., when he was charged with insulting authorities. Before being handed over, Huge said, a PFP member warned that police “would make sure that the next time he didn’t feel any pain at all.”

The PFP convoy was transporting three officers accused in the slaying of a Veracruz man last week, according to local and national press reports. One unidentified PFP member was killed in Sunday’s crash.

The Federal Secretary of Public Security in Mexico City, which oversees the PFP, did not immediately respond to CPJ’s request for comment. The Veracruz prosecutor’s office referred all questions to the police agency.

Huge told CPJ that he planned to file a formal complaint with the general prosecutor, which is a federal office, and to local human rights authorities.

Four reporters in the northern state of Coahuila were detained by members of the Mexican army in August 2007, while covering a routine drug raid. The reporters, who said they were abused by authorities, were charged with possession of a firearm and marijuana. A federal judge exonerated the reporters a month later, while the Nacional Commission on Human Rights said it would investigate the soldiers involved in the incident.