New York, January 15, 2008—Afghan authorities swiftly arrested four suspects following the attack on the Serena Hotel in Kabul yesterday, according to The Associated Press. The suicide blast took the lives of at least six people, including that of Norwegian journalist Carsten Thomassen, 38, a journalist from the Oslo daily newspaper Dagbladet.

“We mourn the untimely loss of our colleague Carsten Thomassen,” said Joel Simon, CPJ’s executive director. “This is a brutal reminder that the war in Afghanistan continues to take its toll on not just the military but on the journalists who work to bring the story of the conflict to the world.”

In Monday’s attack, the intended target was Norwegian Foreign Minister Jonas Gahr Stoere, who was meeting at the hotel at the time but was not hurt, according to Ban Ki-moon, United Nations secretary-general. Three men, identified as Taliban militants wearing suicide jackets filled with explosives, charged into the hotel, according to Afghan intelligence chief Amrullah Saleh at a press conference today. Saleh said one was killed when his jacket exploded after he was shot by a hotel guard outside the building. Another detonated his explosives inside the hotel, and a third was arrested later. Police authorities later announced that four people were arrested on suspicion of being linked to that attack at the hotel.

Since 1994, CPJ counts 16 journalists killed in Afghanistan, 11 of them non-Afghans. 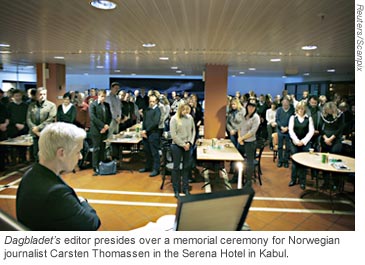