New York, November 16, 2007—The Committee to Protect Journalists is greatly alarmed that news channels on the Pakistani networks GEO TV and ARY Digital were ordered by authorities to halt transmission today from the United Arab Emirates after refusing to sign a Pakistani government-mandated “code of conduct.” 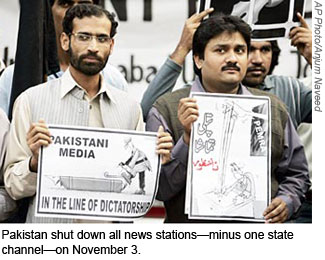 GEO TV was ordered by the UAE Information Ministry in Dubai to cease satellite and Internet broadcasts by midnight local time on Friday, according to Sami Abraham, senior correspondent and producer of GEO TV in New York. ARY Digital received a similar order with no reason given for the shut down, according to ARY news director Mohsin Raza.

“We are surprised that the authorities in Dubai, which is developing as a regional free trade and communications hub, would prevent such satellite transmissions,” said CPJ Executive Director Joel Simon. “We call on Pakistani and UAE authorities to reverse this order immediately and allow private TV networks to report on the important developments taking place in Pakistan without being subject to stifling official restrictions.”

GEO TV and ARY Digital were the only networks that had not returned to cable distribution in Pakistan since the shut down of all private broadcasters on November 3 after President Pervez Musharraf suspended the country’s constitution. The news channels had remained accessible in Pakistan via Internet or satellite before today’s blackout.

Networks had been told to sign the 14-page code of conduct by the Pakistan Electronic Media Regulatory Authority if they wanted to resume transmission in the wake of recent political turmoil in Pakistan. GEO TV and ARY Digital refused to sign. The agreement bypasses due process if stations violate government regulations.