New York, November 12, 2007—The Committee to Protect Journalists is greatly concerned by pressure being exerted by the Pakistani government on broadcasters to sign a 14-page government-mandated “code of conduct.” Station owners say they have been told that if they do not sign the agreement, they will not be allowed to return to the air. All broadcasters, minus the official television channel, have been silent since they were shut down on November 3, soon after President Pervez Musharraf suspended the country’s constitution. 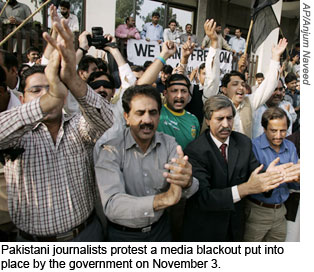 “This tactic is an attempt to intimidate critical journalists,” said Joel Simon, CPJ’s executive director. “By demanding all broadcasters sign this agreement, President Musharraf is attempting to legitimize his move to silence his critics. We repeat our call to President Musharraf to reverse the policies he has put in place since he seized power and let journalists and media companies report openly on what is happening in Pakistan at this crucial time.”

The Pakistan Electronic Media Regulatory Authority (PEMRA) is meeting individually with members of the Pakistani Broadcasters’ Association and owners of the only two shuttered FM radio stations. So far, about 15 broadcasters have apparently agreed to sign on to the new restrictions, since they are now back on the air. Pakistan’s four major independent news broadcasters—Ary OneWorld, Aaj TV, Dawn TV, and Geo TV, all owned by larger parent media companies—have not reappeared on cable yet. Some are reaching viewers via streaming Internet and satellite transmission. International broadcasters like the BBC and CNN have been off the air since the constitution was suspended. Only official Pakistan TV has been allowed to remain on the air throughout the crisis.

“When we went to PEMRA’s office we were shown the document, which they want us to sign, but were not given a copy,” Imran Bajwa, chairman of the Mast FM 103 Radio Network, told CPJ. His station is among those that have been shut down. “The officials told us we would have to sign the agreement before they would let us back on air. They said they expect to see us again tomorrow.”

The government’s “code of conduct” agreement is a re-writing of voluntary self-governing regulations drawn up in June by the Pakistan Broadcasters Association, according to Mazhar Abbas, secretary-general of the Pakistan Federal Union of Journalists. According to Abbas, who has a copy of the document, the new rules do away with due process for violating government regulations and hold all owners and partners of media companies responsible for any violations of the new restrictions. It also holds broadcast journalists responsible for their stations’ violations. The union was not consulted on the regulations by either the government or the broadcasters, Abbas said.

On November 4, the day after President Musharraf suspended the constitution, a new ordinance went into effect that, among other things, makes it illegal to report critically about government policies; discuss Supreme Court cases challenging the October vote that returned Musharraf to power; broadcast live coverage of antigovernment protests; report on the results of attacks by antigovernment militants; or carry statements from Islamist militants or pictures of them. Violations of the new law can result in up to three years in prison, fines of 10 million rupees (US$165,000), and the suspension of broadcasting licenses.