New York, October 19, 2007 — The Committee to Protect Journalists is saddened that ARY One World TV cameraman Muhammad Arif was among the more than 130 people killed in the Thursday bombing in Karachi, according to the official Associated Press of Pakistan. We send our condolences to his wife and six children. 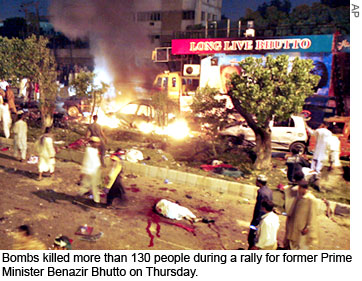 Several others were injured in the twin blasts, which took place during a political rally for the return from exile of former Prime Minister Benazir Bhutto in Karachi. The News, an English language daily with offices throughout Pakistan, reported that Abid Ali, of Dawn News TV was seriously injured. APP reported that others injured included Rashid Ali Panhwar, a reporter associated with APP’s Electronic News Gathering service; Talat Anjum, a cameraman with Punjab-language news channel Apna; and Syed Athar Hussain, a photographer with the Karachi-based daily Jurrat.

“Journalists on the frontline of breaking news events realize the dangers they face, but we are always saddened to learn that a colleague has lost his life, or has been seriously injured,” said Joel Simon, CPJ’s executive director. “We extend our condolences to these men’s families and to their co-workers.”

The men were among the crowds on the 20-mile (32 kilometer) route from the airport to the center of Karachi. Bhutto later told a press conference held in her family’s home that she had been warned of four possible attempts being planned on her life. No arrests have been made and no group has claimed responsibility for Thursday’s blasts.