New York, October 22, 2007—Hundreds of journalists marched through the streets of the Niger capital, Niamey, on Saturday to protest the arrests of two prominent journalists in connection with a government crackdown on media coverage of a rebellion of nomadic Tuaregs in northern Niger, according to news reports and local journalists. 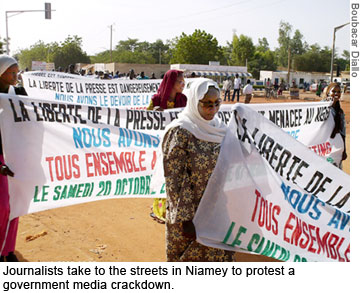 About 400 marchers carrying signs and chanting “Free Moussa Kaka and Ibrahima Manzo!” walked to the Place de la Concertation in front of Niger’s National Assembly. It was the most important march of journalists since 1990, when the country entered an era of political and media liberalization, according to Abdoulaye Massalatchi, president of one of a dozen local media groups participating in the march.

The march also marked the 30th day since the arrest of veteran journalist Kaka, a correspondent of Radio France Internationale (RFI), and the 11th day of detention without charge of Ibrahima Manzo Diallo, the director of the bimonthly Aïr Info, a newspaper based in the rebel hotbed town of Agadez.

The government crackdown, including a ban on live debates discussing the conflict, a monthlong suspension of RFI and a three-month suspension of Aïr Info, has forced journalists to censor coverage, director Kader Idi of private Radio Anfani told CPJ.

“The arrest of Moussa Kaka and Ibrahima Manzo Diallo are part of a disturbing pattern of censorship that threatens to undermine the democratic gains made by Niger,” CPJ Executive Director Joel Simon said. “Journalists not only have a right but also a duty to cover the Tuareg rebellion and keep the public informed. We urge the authorities to release our colleagues immediately and lift the restrictions imposed on national and international broadcasters.”

Kaka, charged with “endangering state security,” based on alleged telephone conversations he had with the rebel leadership, could face life in prison if convicted, according to defense lawyer Moussa Coulibably. Coulibaly has filed a writ requesting the production of the alleged recordings, he said.

Diallo has been held without charge since his arrest in Niamey on October 9, the same day his paper published a list of 20 people detained on suspicions of links with the rebels, according to local journalists. His extended detention has exceeded the authorized term of lawful police custody of 48 hours, which can legally be renewed once, Coulibaly told CPJ. The lawyer has filed a petition requesting Diallo either be charged or released immediately, he told CPJ.