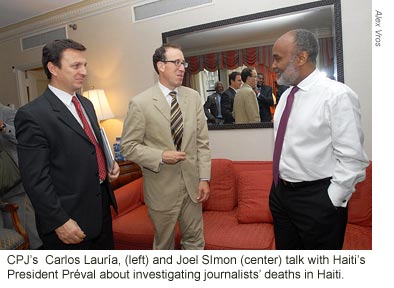 New York, September 27, 2007—Haitian President René Préval has pledged support for an independent committee evaluating stalled investigations into a series of unsolved journalist murders this decade and said that all political obstacles to justice have now been removed.

Meeting with a delegation from the Committee to Protect Journalists on Wednesday, Préval expressed his “full support” for the committee and said that the Haitian government “wants justice to prevail.” Préval is in New York to participate in the 62nd session of the United Nations General Assembly.

“We welcome President Préval’s will and commitment in pursuing justice in crimes against the press,” said CPJ Executive Director Joel Simon. “Without political impediments, the Haitian government must now push strongly for exhaustive investigations in the cases of murdered journalists. Haiti must break the cycle of impunity
so that faith can be restored to the country’s judicial system.”

CPJ officials and Préval examined press freedom conditions in Haiti during the meeting, and they talked about the future of the recently created independent committee of journalists that is reviewing the progress of official investigations into the unsolved murders of journalists in Haiti from 2000 to 2007. Préval is in his second year in office following the ouster of Jean-Bertrand Aristide and a tumultuous interim administration.

“Haitian politicians and investigators had not been interested in pursuing justice in cases of murdered journalists because some of them were implicated in these crimes,” Préval told CPJ through an interpreter. “But now the situation has changed; there is political will and this will allow us to make progress.”

Préval acknowledged that there will be difficulties in bringing justice, especially in the oldest cases. But the president said that the independent committee is a “signal that will permit us to resolve some crimes.” Préval said that “freedom of the press is essential for the development of a democracy.”

The Haitian president noted that the climate of violence that had plagued Haiti since 2000 has eased. “There is a different atmosphere now, and the press can work in a relatively free environment,” Préval said. According to CPJ research, attacks on Haiti’s press dropped significantly in the last two years.

The CPJ delegation called on Préval to support efforts to strengthen the work of the independent committee, and it urged the government to provide police, judges, and prosecutors with the resources to do their jobs. CPJ also requested Préval renew the mandate of Judge Bernard Saint-Vil, who is responsible for the investigation into the murder of Spanish correspondent Ricardo Ortega, who was shot twice when gunmen opened fire on demonstrators in Haiti’s capital, Port-au-Prince, in April 2004.

The independent committee was a joint initiative between Préval and the local press freedom group S.O.S. Journalistes. The committee has access to official police and court documents on the murders of at least 10 journalists. It is studying the case files one by one in order to determine where and why they have stalled.

“Progress has already been made,” Préval said. The president cited recent convictions in the case of Jacques Roche, cultural editor with the Port-au-Prince-based daily Le Matin, who was killed in Haiti’s capital in July 2005. On August 30, a judge in Port-au-Prince sentenced Alby Joseph and Chéry Beaubrun, members of the local Solino gang, to life in prison for the kidnapping and murder of Roche. “This is a step forward,” noted the president.

The committee has sought to identify concrete problems in the investigations and expedite solutions. In one case, for example, the committee discovered a vital “missing” courthouse file in the 2001 slaying of Brignol Lindor and forwarded it to the investigators actually handling the case.

Delva said the committee will next examine the case of Haitian journalist Jean-Léopold Dominique, owner and director of Radio Haïti-Inter and one of the country’s most renowned journalists. Dominique was gunned down on April 3, 2000, outside the entrance to his Port-au-Prince station. A long-stalled case that has been characterized by incompetence and a lack of political will, Dominique’s slaying remains unpunished, CPJ research shows.

Three journalists have been murdered in direct reprisal for their work in Haiti since 2000, CPJ research shows. CPJ is investigating the circumstances surrounding the slayings of the other journalists.