New York, September 27, 2007— A Japanese photographer, Kenji Nagai, 50, who was working for Tokyo-based video and photo agency APF News, was one of at least nine people killed today by Burmese troops cracking down on anti-government demonstrations in Rangoon, according to official Japanese state-run television. Another 11 demonstrators were injured, as were 31 members of government security forces, the broadcast said.

The numbers could not be independently verified and exile groups said they could be much higher. Troops were seen clearing demonstrators from the streets, telling protestors to leave within 10 minutes before they would open fire. The Japanese embassy confirmed that Nagai was one of those killed. He had entered Burma on Monday, according to media reports.

The Committee to Protect Journalists strongly condemns the shootings and the heavy government interference and ongoing harassment of journalists who are attempting to cover the unfolding political events in Burma. 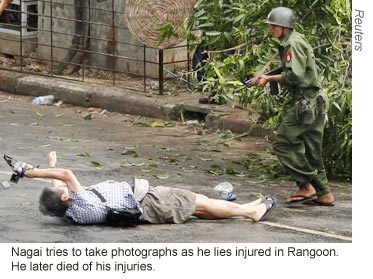 “The protests in Burma are of international concern, and we call on the military government to allow journalists to report freely and without fear of reprisal on these major events,” said Joel Simon, CPJ’s executive director. “Judging by the widespread news and video clips of recent events, we fear that the junta will resort to even greater violence as the situation in Burma grows worse.”

According to the Burma Media Association (BMA) and Burmese exile-run news sources, on Wednesday afternoon at the height of the conflict the military government disconnected nearly all mobile phone services in Rangoon. The cuts took place at 3 p.m., coinciding with the time when security forces confronted and opened fire on Buddhist monk demonstrators at Sule Pagoda in central Rangoon.

Authorities also reportedly moved to block the Internet, over which journalists have sent news, images, and videos of the protests to outside news agencies and foreign-hosted video-sharing Web sites since the unrest began on August 19. According to BMA, in recent days police have moved to close several Internet cafes in Rangoon.

Meanwhile the main state-affiliated Internet service provider, Bagan Cybertech, has, on government orders, agreed to reduce Internet speeds, an apparent attempt to limit the ability of journalists to send out video images of the protests, according to BMA. CPJ research has found that many Burmese journalists inside the country were able to use proxy servers and proxy sites to get around government-administered blocks on foreign-based e-mail accounts, including Gmail, which they have used to anonymously send out news to foreign and exile-run news organizations.

Several journalists were able to send out images and videos of the protests as well as footage of the government’s crackdown on demonstrators over the Internet, according to news groups who received the materials.

Burmese authorities have refused to grant reporting visas to scores of journalists who have applied in recent weeks from Thailand.