One of the two detained men has confessed to being involved in both attacks, according to Mogadishu Mayor Mohamed Omar Habeeb. Authorities did not reveal the identities of the suspects. 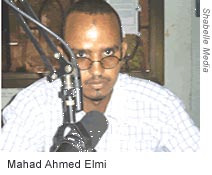 “We condemn the brutal killings of Mahad Ahmed Elmi and Ali Sharmarke, two voices who courageously told the world about Somalia’s turmoil in the face of attacks and intimidation, and extend our deepest condolences to their family and colleagues,” said Joel Simon, CPJ’s executive director. “The Transitional Federal Government must end the impunity for attacks on journalists by conducting prompt and impartial investigations. Somali journalists have the right to practice their profession without fear of violence.”

Unknown gunmen shot Elmi, director of Capital Voice radio, a private station of HornAfrik Media, four times in the head at close range as he neared the door of his office early on Saturday morning, according to news reports and local journalists. He bled to death after being rushed to the hospital.

A few hours after Elmi was killed, as mourners filed out from his funeral, Sharmarke, founder and co-owner of HornAfrik Media, was killed when the black Land Cruiser he was in was struck by a remotely detonated landmine explosion, according to the local news reports. The explosion hit the front passenger side where Sharmarke sat. None of the more than 20 other vehicles in the funeral procession were hit.

Reuters correspondent Sahal Abdulle, seated immediately behind Sharmarke, was thrown to the floor by the explosion and sustained minor shrapnel injuries, he told CPJ from Nairobi, Kenya, where he was recovering.

Saturday’s attacks were preceded by a shooting on Friday of freelance journalist Abdihakim Omar Jimale, wounded in the chest by gunmen at his home in Mogadishu, according to news reports. He is recovering in the hospital.

Daily deadly attacks by suspected Islamist militants and counter-attacks by Ethiopian and Somali government troops in Mogadishu have left thousands of people dead and hundreds of thousands fleeing the city since December. Authorities have repeatedly cracked down on the media for its coverage of the plight of civilians during security operations.

HornAfrik Media has suffered harassment and attacks from clan militiamen, Islamists, and the Ethiopian-backed transitional government for its coverage, according to CPJ research. In April, HornAfrik’s studios were destroyed by shelling as Ethiopian troops backing Somalia’s transitional government attacked suspected strongholds of Islamist fighters.

Several local radio and television stations in Mogadishu stopped broadcasting from Saturday until 4 p.m. on Sunday as a protest against violence targeting media personnel in the capital, Simba Radio director Abdulahi Ali Farah told CPJ. HornAfrik radio and Capital Voice radio resumed broadcasting this morning after a 22-hour hiatus, but acting station manager Saeed Tahlil reported he was concerned by alleged death threats made against three reporters there if HornAfrik doesn’t shut down.