New York, July 31, 2007—The Venezuelan government has asked cable and satellite providers to remove RCTV’s new signal from their programming by tomorrow if the station does not register as a national broadcaster. RCTV has been operating as a paid subscription channel since July 16 after being taken off the public airwaves by the government at the end of May.

Telecommunications Minister Jesse Chacón said RCTV must register as a national broadcaster before the National Telecommunications Commission (CONATEL) in line with the 2004 Law of Social Responsibility in Radio and Television. This would compel RCTV to broadcast a certain amount of nationally produced programming and children’s shows and carry President Hugo Chávez’s cadenas—his nationwide simultaneous radio and television broadcasts—live.

The social responsibility law has been widely criticized by press freedom advocates for its broad and vaguely worded restrictions on free expression. 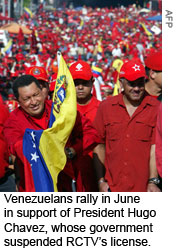 “This seems to be yet another attempt by the Venezuelan government to shut down a critical media outlet,” said CPJ Executive Director Joel Simon. “Forcing the station to transmit President Chavez’s speeches is a sign of the government’s attempt to control the flow of information.”

Mario Seijas, chairman of the Venezuelan Cable Television Chamber, said Saturday that nearly 50 regional stations will also have to comply with the government’s requirement in order to continue their operations.

RCTV International, RCTV’s new signal, broadcasting since July 16, argues that the station has the same characteristics other international cable channels, which are not regulated by the 2004 law. “The station has foreign capital, mixed production, and global broadcasting. Therefore, we should be subjected to the same rules that apply to Telesur and the rest of the international channels,” said a statement from RCTV.

Known for its harsh opposition views, RCTV is the country’s oldest private station, with 53 years on the air. On May 27, RCTV stopped broadcasting at 11:59 p.m. The station’s new signal, carried locally by four cable operators and one satellite provider, offers most of the same news shows, comedy, and soap opera programming as before. RCTV’s original frequency has been replaced by a new public service broadcaster called Venezuelan Social Television Station.

On April 24, CPJ issued an in-depth report, “Static in Venezuela,” which concluded that the Venezuelan government failed to conduct a fair and transparent review of RCTV’s concession renewal. The report, based on a three-month investigation, found the government’s decision was a predetermined and politically motivated effort to silence critical coverage.

A March appeal seeking to annul the government’s decision had been admitted by the country’s Supreme Tribunal of Justice. The court said that month that it would review the appeal and could eventually overturn the decision. On May 24, CPJ wrote a letter to President Chávez urging him to allow RCTV to continue broadcasting while its appeal is pending.