New York, July 30, 2007— The Committee to Protect Journalists is concerned by reports that a Gambian reporter, arrested a year ago and since held incommunicado without charge or trial by the government, was briefly admitted last week to Gambia’s main hospital in the capital, Banjul. 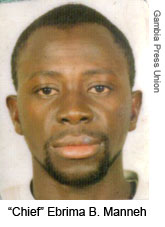 “Chief” Ebrima B. Manneh, the State House correspondent for the private, pro-government Daily Observer, was arrested without charge by plainclothes security agents on July 7, 2006, in connection with an unpublished story critical of Gambian President Yahya Jammeh. Authorities refused to comment on the arrest until February, when police publicly denied holding the journalist.

“We hold Gambian authorities responsible for the well-being of Chief Ebrima B. Manneh,” said CPJ Executive Director Joel Simon. “His continued imprisonment without charge or trial and the official denial of his detention in the face of contrary evidence is disturbing. We renew an urgent call for the authorities to immediately release him.”

On Wednesday, Manneh is said to have been admitted to the Royal Victoria Teaching Hospital for treatment of high blood pressure—a condition he allegedly developed in detention, according to U.S.-based Gambian news Web site Senegambianews and the Ghana-based press freedom group Media Foundation of West Africa. Agents from the Police Intervention Unit and prison officials transferred the journalist after a few hours to a military clinic in Banjul, according to the same sources, which cited an eyewitness account.

A relative of Manneh, who asked not to be identified for fear of government retribution, told CPJ that a separate source confirmed the hospital visit for an alleged checkup. Manneh did not have a history of high blood pressure, the relative said.

Hospital spokesman Baboucarr Ngum told CPJ, “I have no idea who gets admitted in the hospital,” without denying or confirming the reports. He referred inquiries to the chief medical director. Police spokesman Suleyman Secka did not return CPJ’s calls.

The Media Foundation of West Africa recently filed suit against the government of Gambia at the Community Court of Justice of the Economic Community of West African States seeking the journalist’s immediate release and compensation for his time spent incarcerated. A government representative failed to appear at a July 16 preliminary hearing in Abuja, Nigeria.

The Committee to Protect Journalists named this year Gambia one of the world’s worst backsliders on press freedom.