New York, May 14, 2007— TV Azteca Noreste reporter Gamaliel López Candanosa and camera operator Gerardo Paredes Pérez went missing on Thursday in the northern Mexican city of Monterrey. The Committee to Protect Journalists is investigating possible links between their disappearance and their professional work.

López and Paredes—both based in Monterrey, 440 miles (700 kilometers) north of Mexico City—reported live on Thursday on the birth of conjoined twins in a local hospital, according to a statement released by the network. The two have not been heard from since they checked in with the station by phone at 4 p.m., the statement said. TV Azteca Noreste is a regional affiliate of the national network TV Azteca. 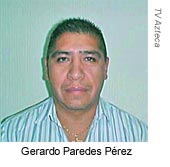 TV Azteca notified local authorities Thursday evening that the men had gone missing, according to Mexican press reports. Their Chevrolet compact car, which featured the TV Azteca logo, has also disappeared, according to press reports and CPJ interviews.

The crew had not reported any threats, according to the state prosecutor’s office in Nuevo León, but investigators are looking into López’s past reports on local organized crime. Daniel de León, the state prosecutor’s spokesman, said authorities are investigating links between the crew’s disappearance and organized crime, according to the Spanish news agency EFE.

“We are very concerned about the fate of Gamaliel López Candanosa and Gerardo Paredes Pérez,” said CPJ Executive Director, Joel Simon. “We urge Mexican authorities to conduct a prompt and thorough investigation, to locate López and Paredes, and to bring them to safety.”

An ongoing war between powerful drug cartels has intensified in the last three years, especially in the country’s northern states. According to EFE, battles between drug traffickers have resulted in more than a 100 murders and dozens of kidnappings in the last two years in the state of Nuevo León. CPJ research shows that Mexican journalists who report on organized crime are also facing greater risks. Since 2000, six journalists have been murdered in direct reprisal for their work in Mexico, and CPJ is investigating the circumstances surrounding the slayings of 12 other journalists. In addition, three journalists have disappeared since 2005.

On May 9, a CPJ delegation met with the Mexican ambassador to the United States, Arturo Sarukhan Casamitjana. The delegation called on Mexico’s federal government to take concrete steps to protect press freedom and prosecute those responsible for crimes against the press.