New York, October 12, 2006—The Committee to Protect Journalists expressed outrage at the cold-blooded execution by masked gunmen of 11 employees of a fledgling satellite TV channel in Baghdad today.

Gunmen in at least five vehicles drove up to Al-Shaabiya television in the eastern district of Zayouna around 7 a.m., Reuters reported. They burst into the station’s offices and executed 11 people and wounded two. It was the deadliest single assault on the press in Iraq since the U.S.-led invasion in March 2003.

“We condemn this barbaric attack on Al-Shaabiya and offer our condolences to the families of the victims,” CPJ Executive Director Joel Simon said. “The brazen nature of this attack demonstrates that those who seek to silence the press operate without any fear at all. Iraq’s emergent press will find it hard to survive if authorities allow these kinds of targeted attacks to continue unchecked.” 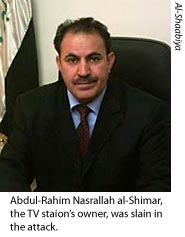 Al-Shaabiya is owned by the National Justice and Progress Party, headed by Abdul-Rahim Nasrallah al-Shimari who was killed in the attack, according to Reuters and CPJ sources. The small party ran in the last election but failed to win any seats. Al-Shaabiya had not yet gone on the air and had only run test transmissions. Executive manager Hassan Kamil told Reuters that the station had no political agenda and that the staff had been a mix of Sunnis, Shiites, and Kurds. The station had not been threatened previously. According to news reports, the channel still aims to launch after the end of the Muslim month of Ramadan in late October.

Kamil said some of the gunmen wore police uniforms, and all were masked. According to news reports the gunmen’s cars resembled police vehicles. 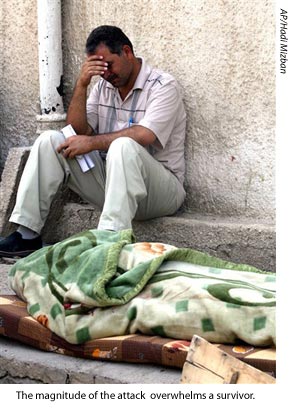 Program manager Mushtak al-Ma’mouri and news chief Muhammad Kathem were taken to the hospital with multiple gunshot wounds. They were in critical condition, according to CPJ sources.

With today’s attack, 85 journalists and 35 media support workers have been killed since March 2003, making Iraq the deadliest conflict for the press in CPJ’s 25-year history.