To read more about the kidnapping of the Fox News journalists, click here: http://www.cpj.org/news/2006/mideast/gaza14aug06na.html

CPJ Protests Travel Ban in Southern Lebanon
In a letter to Israeli Prime Minister Ehud Olmert on August 9, CPJ expressed alarm at recent Israeli military actions that have sharply restricted the ability of the press to cover the current conflict in Lebanon and that endanger the lives of civilians, including members of the press. CPJ stated particularly concern for the safety of an estimated 250 journalists in Tyre, who are hunkered down in hotels and unable to move after the Israeli Defense Forces banned vehicle travel south of the Litani indefinitely effective August 7. “We would like to stress that these limitations apply to journalists as well,” an IDF statement said.

CPJ urged Olmert to lift the travel ban to allow journalists to do their work unharmed and reminded him that the deliberate targeting of civilians is in violation of international law. 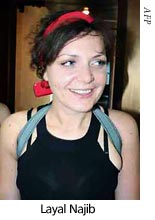 TV Crews in Southern Lebanon Tell CPJ They Are Targeted
Crews from four Arab television stations told CPJ that Israeli aircraft fired missiles within 80 yards of them on July 22 to prevent them from covering the effects of Israel’s bombardment of the area around the town of Khiam, in the eastern sector of the Israel-Lebanon border. A spokesman for the Israeli Defense Forces denied

One day later, on July 23, Lebanese freelance photographer Layal Najib, 23, was killed by an Israeli missile while traveling in a taxi in southern Lebanon to cover Lebanese fleeing north. She was a photographer for the Lebanese magazine Al-Jaras and Agence France-Presse. Najib was the first journalist fatality of the fighting.

CPJ Urges Cuba to Allow Journalists Entry
After Cuban authorities turned back at least three foreign journalists seeking entry to cover President Fidel Castro’s illness on August 3, CPJ urged the government to allow journalists into the country. Foreign reporters are permitted to work in Cuba only with special journalist work visas, which are granted at the government’s discretion. CPJ research shows that Cuban officials have historically granted visas to foreign journalists selectively, excluding those from media outlets deemed unfriendly.

To read more about reporting in Cuba: http://www.cpj.org/news/2006/americas/cuba03aug06na.html

Pakistani officials pledge review of journalist killings
On July 27, Pakistani officials in Islamabad promised a CPJ delegation that they would review investigative records and reveal government information on the deaths of seven Pakistani journalists killed for their work since 2002 including Hayatullah Khan who was found murdered in June. CPJ Asia program coordinator Bob Dietz led the mission with CPJ Board Member and anchor of the soon to be launched Al Jazeera International Dave Marash and journalist Richard Murphy. The officials, Interior Minister Aftab Ahmed Khan Sherpao, Secretary of the Interior Syed Kamal Shah, and Northwest Frontier Gov. Ali Mohammed Jan Orekzai, also pledged to establish a continuing dialogue with Pakistani journalist organizations and to assure them of government support for journalists’ safety.

To learn more about the mission to Pakistan, click here: http://www.cpj.org/news/2006/asia/pak26july06na.html

September 28, Impunity Panel:
Columbia University’s Graduate School of Journalism will host a panel discussion on impunity and ways of seeking justice in the cases of murdered journalists moderated by CPJ Board Member Clarence Page on the evening of Thursday, September 28.

Panelists include Dr. Judea Pearl, father of slain Wall Street Journal reporter Daniel Pearl, Ukrainian journalist and activist Myroslava Gongadze who has campaigned tirelessly for justice in the 2000 murder of her husband Grigory Gongadze, from the Philippines, well respected investigative journalist and press freedom activist Sheila Coronel, and Bob Rivard, Executive Vice-President and Editor of the San Antonio Express-News and author of “Trail of Feathers” about his search for the killers of his reporter Philip True who disappeared in Mexico in 1998.