New York, August 8, 2006—The Committee to Protect Journalists condemns the murders of two Iraqi journalists who were discovered dead on Monday by police in Baghdad. At least four Iraqi journalists have been slain in the past 10 days as murder continues to drive up the record death toll of journalists in Iraq. 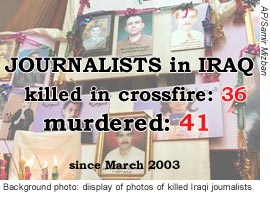 Unidentified gunmen shot Mohammad Abbas Mohammad, 28, an editor for the Shiite-owned newspaper Al-Bayinnah Al-Jadida, as he was leaving his home in the Adil section of western Baghdad to go to work early Monday morning, according to The Associated Press and CPJ sources. Mohammad was highly critical of politicians and Iraqi officials regardless of sect or affiliation, a local source told CPJ. The journalist had received several death threats because he worked for the paper, local journalists said.

Late Monday, the body of freelance journalist Ismail Amin Ali, 30, was discovered by police in the eastern section of Baghdad known as al-Sadr city, according to a CPJ source. His body was riddled with bullets, and Iraqi police said they found signs of torture, The Associated Press reported. A local source told CPJ that the journalist was abducted while he was at a gas station in al-Shaab neighborhood of Baghdad two weeks ago. The kidnappers had demanded ransom, but his family was unable to pay.

A local source said Ali, a well-known Sunni columnist for several Baghdad-based papers, including Al-Sabah and Al-Qarar, may have been targeted because he was highly critical of the Shiite-dominated security forces.

“We condemn the senseless and reprehensible murders of our colleagues Mohammed Abbas Mohammad and Ismail Amin Ali,” CPJ Executive Director Joel Simon said. “These murders reflect the generalized carnage that is claiming so many civilian lives, and our outrage grows as the list of murdered journalists becomes longer by the day.”

In all, 77 journalists and 27 media support workers have been killed in Iraq since the war began on March 20, 2003, making it the deadliest conflict in CPJ’s 25-year history.